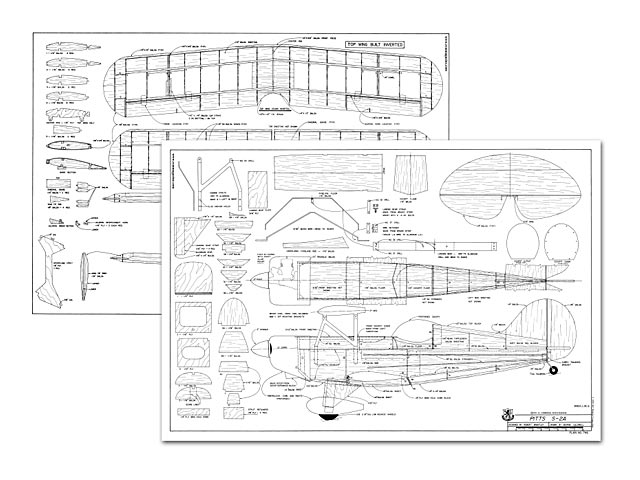 Quote: "The Pitts S2A is a .29 to .45 powered Stand-Off Scale biplane that can be carried assembled to and from the field in the trunk of a medium sized sedan. And, once at the site, its aerobatic performance and low speed characteristics will put the rest of the planes in the pit area while the other flyers stand around and watch with envy. Pitts S2 by Robert Brantley.

The design of the Pitts S2A started some two years ago when I wanted a good looking, snappy flying .40 powered biplane. I chose a .40 powered bipe because it can be carried assembled to and from the flying field in the trunk of a medium sized sedan. Being a real estate broker, most of my flying is done on a weekday morning, then back to the office. I can't afford to waste time at the flying field setting up to fly.

During the long wait for someone to come up with a design to fit my preferences, thoughts of designing my own kept cropping up. Why not? Nothing to lose if it doesn't fly, right? Finally I started to put thoughts on paper. This being my first, and so far, only design, why not do it right and try for something fast and easy to build? After reading and re-reading several 'how to design' articles that have periodically appeared in RCM, work began.

Admittedly the design of an airplane with the name Pitts has not been one of the easier designs to accomplish. Being a short coupled airframe to begin with, combined with a small model, causes not only ground handling problems but very, very quick control responses. The S2A was chosen over the Pitts 1A design because of the better moments which I hoped would produce a better flying airplane. That decision has paid off in an excellent flying sport aircraft and one that can be flown by anyone except a rank beginner. Control response is very smooth and predictable. The stalls, if you can call them that, are gentle with only oscillations occurring. The plane's slow speed ability makes for effortless low passes and landings. In fact, the slow inverted flying ability of the S2A has astounded everyone who has had the opportunity to fly her. If you are an experienced flyer, you might want to move the Center of Gravity rearward to facilitate spin entry.

I do feel the challenge of designing a good model of a Pitts airplane was well worth the effort. The model captures all of the real plane's lines and appeal. At the flying field the model is easily identified as a Pitts. If weight is kept around the 80 ounce mark any good .29-.40 engine will give all the performance you would want.

The original plane used a standard K & B .40. In addition to the fine flying ability of the Pitts S2A, other design features were incorporated to improve overall performance and ease of construction. These included the landing gears wide stance, for great ground handling, and novel wing attachment. The aluminum cabane struts are no harder to fabricate than bending and soldering the customary wire struts. In fact, the sets made took about 15 minutes per set. Since the cabane struts are not attached until after building is complete, finishing is a snap. As with any short nosed airplane, keep the tail light. Choose your balsa carefully to prevent adding excessive nose weight for balance.

Before starting, if you will first pre-cut all pans and make a custom kit, your actual building time will be reduced. You can make one of three S2A versions: front cockpit covered with rear bubble canopy: front cockpit open with windscreen and rear bubble canopy: or windscreens on both cockpits. A fiberglass cowl, wheel pants, and two bubble canopies will be available from House of Balsa as a set. For prices, you can write them at 20134 State St., Cerritos, Calif. 90701. The canopies can be cut and used as windscreens, if desired. If scratch-building is not your cup of tea, a kit of the S2A should be available from the above manufacturer in early 1979.

Bottom Wing: Pin 1/4 in sq balsa bottom rear spar to building board. Trim one piece of 1/16 x 2 x 36 in balsa to 17/8 wide in order to have one straight edge. Cut four pieces 8 in long to be used for the lower wing trailing edge sheeting. Pin the trailing edge sheeting to the plan and glue the forward edge to the spar. Use the ribs to locate the front spar. Pieces of 5/16 in sq. balsa are used to elevate the front spar to proper height. Locate and glue ribs #2, #3. and #4 to the trailing edge and spars..." 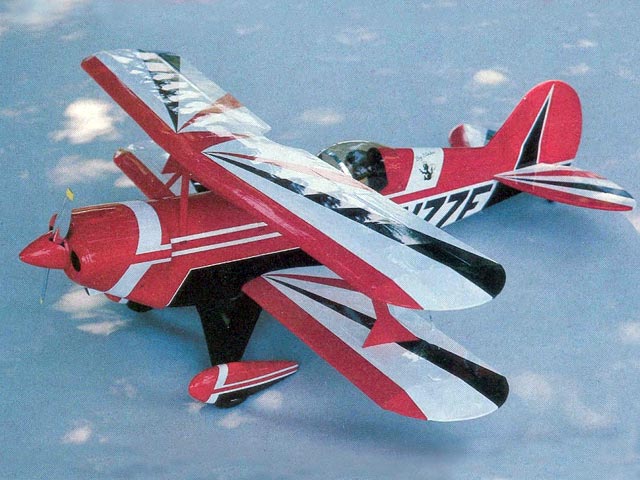