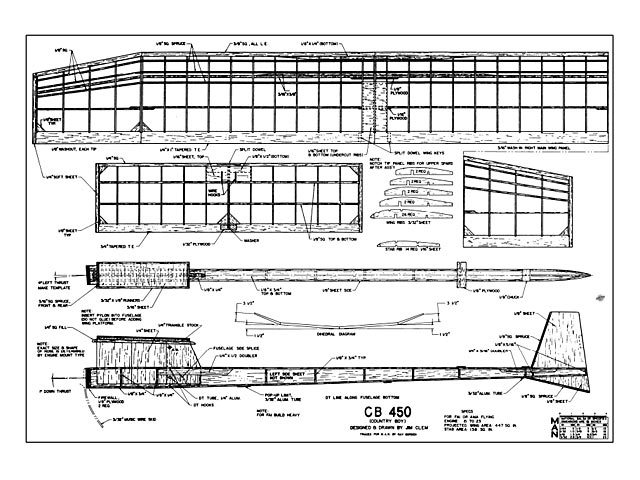 Quote: "Outstanding Class A or B powered free flight for AMA or FAI - designed to win and handle the hottest engines. Country Boy 450, by Jim Clem.

In 1972, I observed an experimental free flight model with folding wings. During its power climb, the outer halves of the wing were folded under the inner panels. The instant the engine stopped. the wings would unfold, and the airplane would go into a slow, graceful glide. When its mechanisms were working properly, the airplane would climb straight up, like a rocket.

Though it was quite a departure from conventional models, its designer was striving for the combination of the two ingredients most sought by competition-minded free fighters: a scorching hot climb and a superlative glide. Although we can't have the best of both, we're closer now than ever before with today's super-hot engines.

The subject of this article, the Country Boy, is a product of the current state-of-the-art. While it's quite obvious the design was influenced by contemporary FAI, it was also designed for the AMA flier who wants an airplane that will make him a strong contender in A or B gas. The ship pictured has the new K&B 3.25 cc, swinging a K&W fiberglass 8 x 3. To say the least, the engine has a fast pulse (like mine, the first time I flew the airplane) and takes the CB out of the blocks like a goose with its tail feathers on fire.

All of this power would indicate that flight trimming might be difficult. Not so! Even though the airplane must be flown at a relatively low incidence angle, only a few flights were needed to get the ship to groove. (Trimming will be discussed in detail, later.)

The average weight of the Country Boy 450 is 22 ounces. No attempt was made to build the airplane light, knowing that structural integrity would be needed to handle the power of the hot engines now on the market.

Several A-B/ FAI Country Boy planes have been built and flown under contest conditions. Some have been flown in FAI events with .15's, while others have been used for AMA Class A and Class B. Modelers who have built and flown this design include: Ed Cadwell, Dick Smith, Bob Frazier, Bill Moore, and Bruce Nowlin. Their feedback has been an important factor in the development of the Country Boy.

If you want to give the plane a try, here's how to build it with a minimum of fuss. First, please read all of the instructions before beginning construction. The wing and stab must he built and covered before the fuselage is completed. The Country Boy is fully assembled with engine and accessories before the pylon is epoxied in place. This allows the pylon to be moved either forward or backward for the proper CG location. This method eliminates the need for adding lead to either the nose or the tail.

Wing: Begin by cutting out the ribs, and sand them well. Notch the trailing edge as shown, and frame in the wing with the leading and trailing edges. Place the bottom spars on the plan, and glue the ribs in place. The ribs at and near the center section must have their notches widened to accept the wing brace and dihedral braces. The top wing spars, 1/2 x 1/8 in, are added after all dihedral has been installed. Undercut the three ribs at the center section to permit the 1/16 sheeting, top and bottom..." 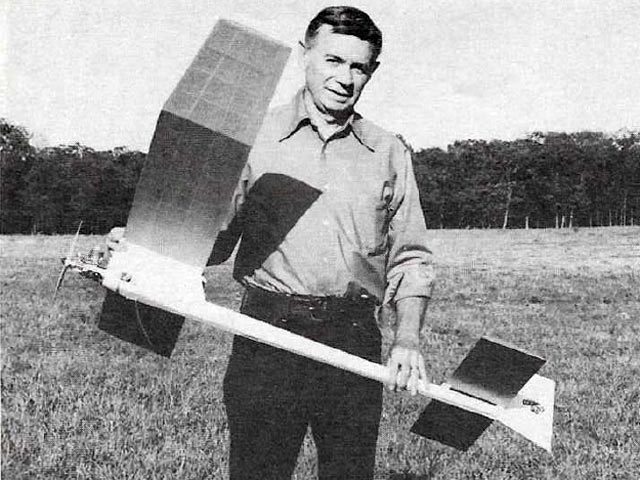