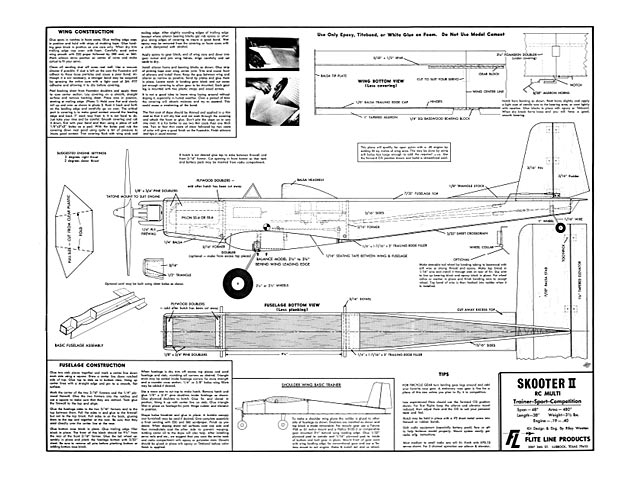 This kit could be built up as as either a low wing or shoulder wing model. Quote: "To make a shoulder wing plane the rudder is glued to other side of fuselage as shown. Doublers are installed as shown and top block is made removable."

Note this kit used a sheeted foam-core wing, so no ribs or wing parts are shown.

Quote: "I just bought the kit and scanned the plans. It is from Riley Wooten. Low wing tail dragger, 4 channel, .40 size. Thanks again! Tom"

Quote: "Field and Bench: Flite Line's Skooter II with MRC's Webra .40 R/C, by Larry Detwiler. Billed as an 'Almost ARF' type of kit the Skooter, because of its simplicity, just about fits its billing. Plane, engine and EK Log III performed well.

It came as quite a surprise to me when MAN's publisher asked me to do a Field & Bench on the Flite Line Products Skooter II and the MRC Webra .40. You see, my forte is Contest flying and my stable is multi .60's. The word 'forte' is used rather loosely, as I am now flying C Novice with only two trophies to my credit.

Even though my skill as a Contest flyer is questionable, I do demand more in terms of reliability and predictability from my equipment than most Sunday flyers. In fact, if anything separates the Contest flyer from the Sunday flyer, it is this demand on his equipment. Based on this I was a little skeptical (later proved unwarranted) of this small plane and engine. Well, enough of this, on with the Field and Bench...

First, the Skooter II. It is called an 'Almost ARF' because of its simple construction. The fuselage and tail are of typical balsa construction. The wing is foam and uses a special covering which is supplied with the kit. Overall, the kit is a good one.

One unusual feature of this kit is that the plans are not full size. At first glance this may appear to be a drawback but the plane proved so simple to construct that there was really little need for plans. The instructions on the plans were complete and would be particularly useful to a newcomer.

The Skooter II has 480 square inches of wing area and is designed for .19 to .40 size engine. It can be built as a shoulder or low wing craft. I choose the low wing design. A three or four channel radio system can be used for con-trol. If a three channel system is used, rudder control should be eliminated. Although the design weight is 3-1/2 lbs, mine weighed almost 4 lbs.

I started construction with the fuselage. The top block was pinned to a building board and, as per instructions, everything was built on this. Titebond was used exclusively except for the firewall, which was epoxied. Various building options are given in the plans. One of these options was wing saddle doublers, which I used. The fact that a .40 engine was to be used justified this additional strength.

The tail surfaces are simple 3/16 balsa sheet construction and are pre-cut, which makes for easy building. The steerable tail wheel is another option which I included. The whole fuselage and tail can be easily built in two evenings (one, if five-minute epoxy is used).

As I said, the wing is unusual. It is a foam core covered with a self-adhesive covering supplied with the kit. Again an option, the covering can be applied directly to the foam, or the cores can be sprayed with 3M77 cement for additional strength. I chose to go for strength. The covering was much easier to apply than balsa, especially around the leading edge of the wing. After covering, the wing is joined (with epoxy, of course) using a one-piece landing gear block as the dihedral brace. For those concerned about strength this wing is sparred both top and bottom. The wing is finished by adding strip ailerons and balsa tip plates.

The plane was finished using the normal Silkspan and dope method on fuse-lage and tail surfaces. The wing required no additional covering and after the covering was slightly roughened with 400 sandpaper, it took dope well. The plane was painted orange with a simple blue trim. I will not go into depth on my finishing techniques as my finishes are only acceptable.

The engine was mounted on a Tatone mount at a 45 degree angle. Side mounting, as called for in the plans, could not be used because of the need for muffler clearance. A six ounce tank and my faithful EK Log 111 completed the ship and I was ready to fly.

One tip before leaving the Skooter II: If you plan to use a larger engine (.30-.40), keep your radio equipment as far aft as possible.

Now let me tell you about the second half of this Field and Bench, the MRC Webra .40. If you can imagine a Webra .61 shrunk to a .40 size, you have it - same dark gray anodized head, same carburetor, same muffler mounts are all there. It is certainly a beauty.

As is my usual practice, the engine was first bench-mounted and run very rich for 25-30 minutes. Again, like its big brother, it is very easy to start both hot and cold. It was then mounted in the Skooter II, run more and the idle adjusted. A 2800-3000 RPM idle (my normal setting) was easily obtained. My club requires mufflers on all engines, which tends to limit the top end. In fact, I had a spare Tatone Peace Pipe so I drilled and tapped it to match the Webra. The muffler was the .29 to .40 size, and on a .40 is very restrictive. I would recommend the next larger size. Even so, the Webra turned 11,500 RPM on a 10-6 Top Flite prop. As I later discovered, this was more than suf-ficient for this plane. In fact, after flying with this engine I decided to act like an amateur Peter Chinn and measure the performance of the Webra .40. Following are the RPM reading obtained in my test.

As I said in the beginning of this article, my stable has been .60 size multi, but after this Field and Bench, and seeing this engine in action, I am not so sure that the .40 size is not as good.

To further shake my confidence in .60 size planes, I watched two outstanding .40 size planes fly at this year's Nationals. One was a semi-scale P-51 Mustang (oz12507) flown by Jim Kirkland (he could make a box fly well). The other was an 80% Eyeball flown by a young senior, Charles Hillerman. The Nationals was his first contest and he flew C Novice. All I can say is that we old men better watch out - young men and .40's are in!

Now to the flying. I picked a nice Sunday afternoon and off to the field. The normal contingent of WRAMS was there, and Skooter II and the Webra .40 drew many admiring comments. The first flights with a rich engine (still breaking in) were enjoyable but not spectacular. Skooter flew right off the board with only minor trim changes on the transmitter required for hands-off flight. Finally, I leaned the engine out, and wow - it took off in five feet and went into a vertical climb. After getting control back, I did a few loops, rolls, Cuban eights, etc. It could do them all. At half throttle the ship was very docile and, in my opinion, a good low wing trainer. At full throttle, it really moved and did all the maneuvers I knew. Landings were good even though a little fast. This is probably because of its almost four lb weight.

I'll wind up by saying thanks to Walt Schroder for asking me, as I certainly enjoyed doing this Field and Bench. Also my thanks to Jack Ruggiero of the WRAMS for the excellent photographs." 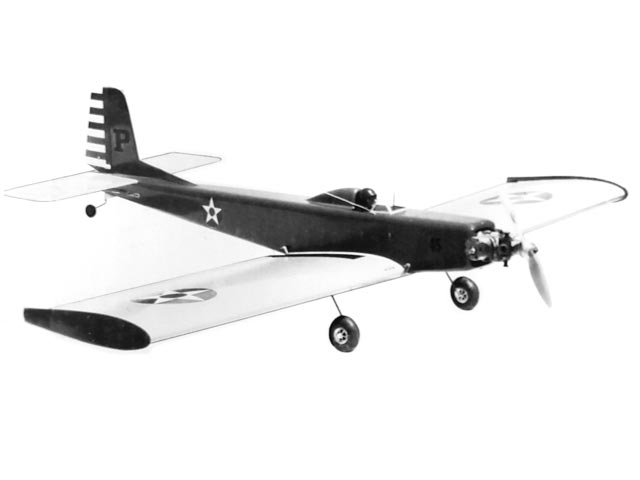 Our club used to race Skooter II's. We'd cut out our own kits. (I think this was when they weren't distributed any more.) If memory serves, the airfoil is a NACA 015. We were using K&B Sportster 20's, which was a mistake, because only one guy knew how to make them run right. Actually, he told us how to do it right, but no one did. I had at least 2 different Skooter II's. I liked it best with floats, which seemed to actually help with the aerobatics. Also, with an OS FP40 and an 11 inch prop instead of the K&B. The 11 inch prop helped it get up on top of the snow when using skis.
Lincoln - 13/10/2018
Add a comment