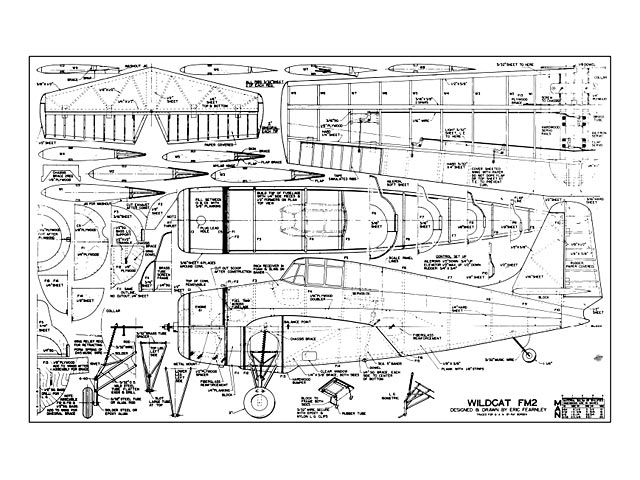 Quote: "By Eric Fearnley. Fine Stand-off Scale version of the famous World War II shipboard fighter, which was both tubby and pugnacious, and made a name for itself before other, more advanced fighters arrived on the scene.

All the world loves the Wildcat - that tubby, pugnacious shipboard fighter which formed a thin gray line between the Japanese air force and the United States immediately after Pearl Harbor. The model I have chosen is the last of the line - the FM2, essentially a F4F8 using a Cyclone engine, and manufactured by the Eastern Division of General Motors, the Bethpage Grumman plant being urgently needed for the Hellcat. My reason for this is the essential "plus" of a greatly enlarged fin, caused by the extra swing of the more powerful powerplant on takeoff. I will deal with the aerodynamics later, but suffice it to say that the FM2 model flies like a dream, a pretty unusual characteristic for a WWII fighter! Most of the surviving Wildcats are really FM2's, and you can tell by the large fin and rudder, as well as by the two side exhaust vents on the fuse-lage sides.

The development of the fighter in the US immediately before the war is nothing to boast about. Defense leaders were talking about twin .50-caliber mg's on their airplanes, as were the Italians, when already in the Battle of Britain it was obvious that the eight-gun fighter or 20 mm cannons were the basic requirement.

These men refused to learn from Europe, even after F2A's were relegated to training command by the RAF and P39's sent to Russia, which already knew that pilots were going to be more important than airplanes in the years ahead. These ships were no match for the Luftwaffe, but the military were very slow to see the light, and so it was that the Wildcat was largely unprepared when the shooting war started.

It was said that the Wildcat was very inferior to the Zero, but most of the blame must be attached to the lack of active fighting experience of its early pilots. When they learned the lessons of air fighting, which JAF pilots had already got in China and elsewhere, they began to contain the situation. In speed and maneuverability the F4 was not up to the Zero, but like the British Hurricane, which took the brunt of the Battle of Britain fighting (and not the Spitfire, like the moviemakers like to think), the Wildcat had that essential feature of a good fighter - the ability to shoot straight from a rock-steady platform, and it only took one good burst to do the trick. By using a 'thatch-weave' pattern, overflying each other to cover the tails, the 'cats would dive straight through the enemy formations and not get involved in dogfighting. The ability to take battle damage and return (like the Hurri) was the main advantage, for as I said before, pilots were the mainstay of the fighting force.

Book Four of MacDonald's War Planes outlines the FM2 picture. Production of the Wildcat was transferred to the Eastern Division of General Motors, and its first FMI flew on September 1, 1942. In September 1943, the much-revised FM2 delivery began, and continued until 1945. Three hundred and seventy FM2's were delivered to the British Fleet Air Arm. Some served on HMS Pursuer with the 881st Squadron 1944, as Wild-cat 6.

The Model. Before we rush out to buy balsa, let's get down to some straight scale talk. Scale models of WWII aircraft always attract the wrong people. Generally speaking, if they are exact scale, only the chosen few will ever fly them, which is a pity. The scale Class One standards set in international competitions, designed I regret to say by us British, is a disaster for the average scale buff. I have always said it is better to have a model which looks just like the real one, up there in the sky, than one which we can prove in some dubious way is exactly scale, but which no one dares put up in flight.

During the last forty years many different scale ships have come off my drawing board, with mixed results. My last WWII fighter, the Italian Fiat G50, with its tapered wings and short tail, took just three years to get to fly to the standard I demand - that is, general sport flying from a grass field. The good news - very good news indeed! - is that the Wildcat, for the first time in my life, flew away from my grass strip first time without any problems at all, and I managed four 3-point landings out of four on my first day with it, and all on not-too-short grass!

Those who have read about and perhaps built my Hellcat will realize what a different ship this is from its feline brother. Slow down the Hellcat and drop the tail on a landing, and when you wake up the airplane will be literally upside down..." 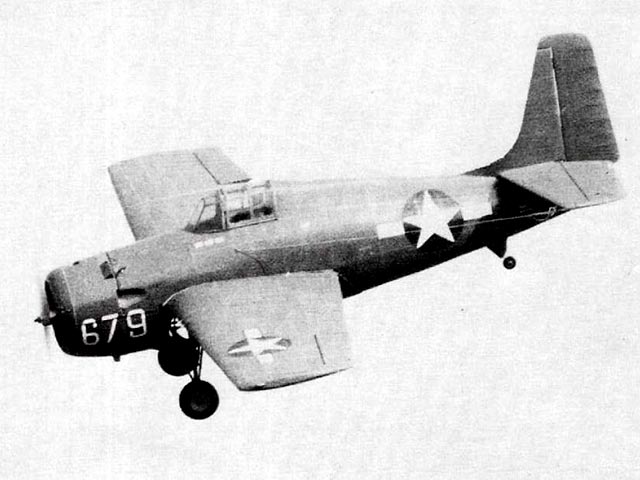