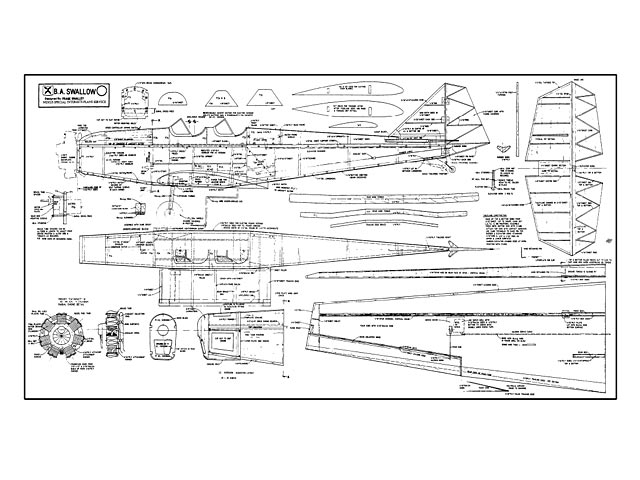 I first thought about modelling the Swallow when I first saw the example that is housed in the Shuttleworth Collection at Old Warden. I had just purchased a second hand Astro 25G motor/gearbox from a trader at the ASP (as was) model meeting. and I was looking for a suitable subject. The Swallow seemed to me to have a certain air about it typifying the mid 30's when I was a boy moving from one RAF station to another with my mother and father, who was a Corporal Service Policeman (Ugh!) and as I have very happy memories of that time, the Swallow it had to be.

The Swallow was built by the British Aircraft Manufacturing Co, who were the successors to the British Klemm Aeroplane Co Ltd, who built the Klemm L25 under licence. The Swallow was structurally similar to the Klemm but with a wider track undercarriage and some parts of the airframe were strengthened. The final version was produced in 1935. To ease production this featured a more angular appearance with straight edges to the wing tips, rudder, and tailplane.

The airframe is totally covered with plywood except for the elevators, and rudder. This meant that to create a credible model it would have to be sheet covered but being electric powered, light at the same time. I think I have managed this by using 1/64 ply for the fuselage covering and foam cored wings veneered with 1/32 balsa.

Construction. As this is a relatively specialised model (electric and all that), I think a step by step, stick A to B, sort of instructions would be out of place, however there are places that I had to scratch my head about and I will pass on how I did it.

First the order of construction. The fuselage and centre section must be completed first at least all below the top longerons. This is so that the tongue boxes in the wings can be aligned correctly with the fuselage tongues to set the wing incidence. A very noticeable feature of this aircraft is the 'Gull Wing' effect of the trailing edge, and this means that the centre section must be assembled in the hand so to speak.

Fuselage. Using a 48 x 12 inch piece of 1/64 ply, cut out the two fuselage sides. The 1/4 in square longerons are stuck on the inside faces using cyano, I used this adhesive throughout the construction..." 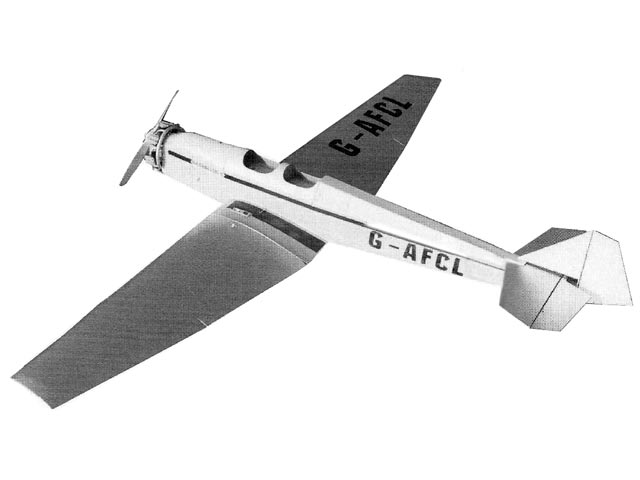