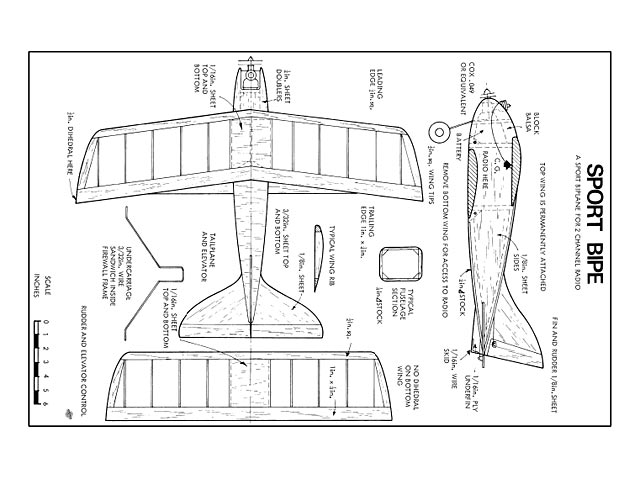 Quote: "Sportbipe. A tiny model only 24 inch wingspan, for the light-weight R/C sets. By Jack Headley.

Sportbipe. Now for a power model. I've built biplanes of and on for numerous years, and have always been attracted to this configuration. This is possibly because my first aeroplane ride was in a biplane, a de H Dominie, from RAF station Church Fenton. It was also my last biplane ride. As you can see, this isn't a scale model of a Dominie, but a much more racy design. It's quite a small model, 24 inch span, and needs a small radio, because of the restricted space in the fuselage. The original was fitted with a Cannon two-channel set, but I have heard of successful flights using a rudder-only radio.

One of the problems I have with biplane designs is getting the proportions satisfactory. I usually end up with the wings too big, so my latest technique is now always to build the wing this way, but not to install the wing tips. The wing span is then decided after the uncovered model is assembled. The wings get cropped bay by bay until a satisfactorily balanced shape appears. At this stage the wing tips are attached. I found this to be a much easier way of getting the proportions right than spending time on endless amounts of sketches.

Again the power plant is the ubiquitous Cox .049. The only problem I've had with this engine is its annoying habit of sucking up debris into its air inlet, so that the engine has to be removed from the model for a clean-up job too often. " 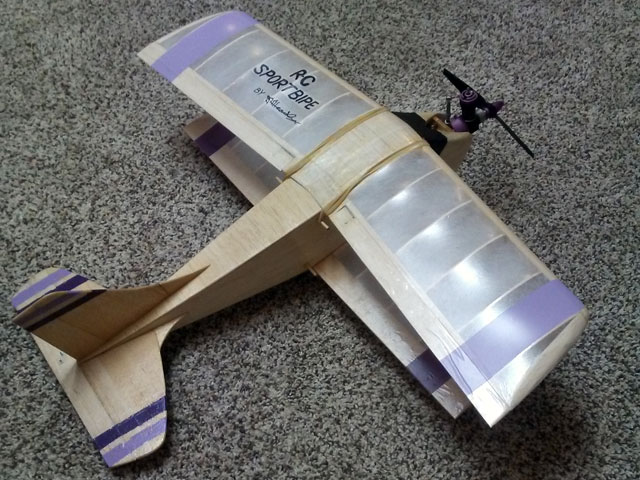 Greetings. Once again, I was perusing the plan inventory, and saw the Sportbipe #10496. At first glance, I did not see any reference to its designer - Jack Headley. Upon further inspection, it was clear. I first saw the R/C SPORTBIPE in a January 1978 issue of R/C Sportsman magazine. I kept that issue handy for nearly 40 years, until I built the model a year or so ago. My model incorporates ailerons, rather than a rudder, and the top wing is removable. Attached are pictures of my efforts [model photo & more pics 003-005]. Thank you for such a great site!
DougBurright - 04/02/2019
Thank you for your pictures, make me want to build one, too.
Hubert - 07/01/2020
Add a comment