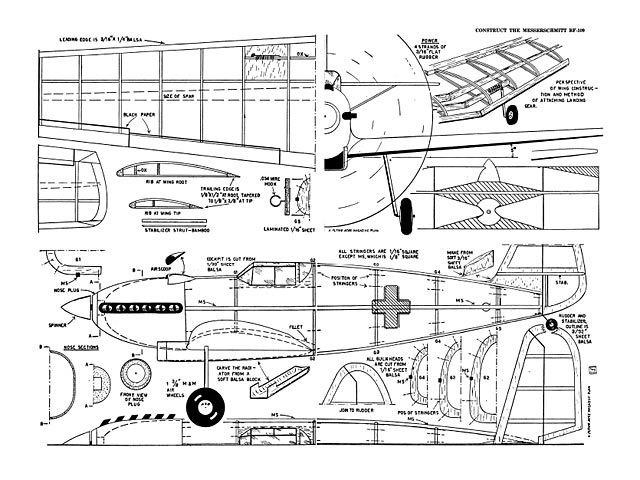 In the sleek, record-smashing Messerschmitt Bf-109, the German Air Force has acquired a truly excellent pursuit job. Powered with a 960 hp inverted V-12 Mercedes-Benz engine, this ship has a high service ceiling and an economical cruising speed. Its maximum speed was recently demonstrated when Dr D Wurster, chief test pilot of the Bavarian Airplane Works, flashed through the skies in a specially groomed stock job to establish a world's landplane record of 379.65 mph.

And despite the recent commotion caused in England when an Army pilot jockeyed his Hawker hurricane up to a speed of 408.7 mph, the Messerschmitt record still stands (at this writing). For the Hurricane figure cannot be accepted as 'official', its run having been made cross-country rather than on a speed course, as is required.

Highly manoeuvrable, the Messerschmitt seems to have been the only ship in the Spanish conflict capable of out-flying the 'Chato' pursuit ships of the Russian flyers. And another asset of the Messerschmitt-to Germany, at least-is the fact that its design readily lends itself to speedy production in large numbers.

And now from production of the full-size ship, we'll turn our thoughts to the actual production of our model. You'll find the job quite easy to build if you'll follow the plans carefully, and she'll turn out to be a swell flyer, too. The original model incidentally, weighs only two ounces ready to fly.

The fairly small prop not only increases the stability by cutting down on the torque somewhat, but it also increases the climb and glide propensities of the ship. Lateral stability is insured by a low centre of gravity and heavy airwheels - which also serve excellently as shock-absorbers in rough landings.

Start work on the fuselage by cutting out all the bulkheads. Use 1/16 sheet balsa. Note on Plate 4 that Bulkhead G5 is laminated from two pieces of hard 1/16 sheet stock, glued together cross-grain. This bulkhead serves also as a retainer for the rear hook. Bulkhead G1 is shown on Plate 1, while the remaining outlines are given on Plate 2..." 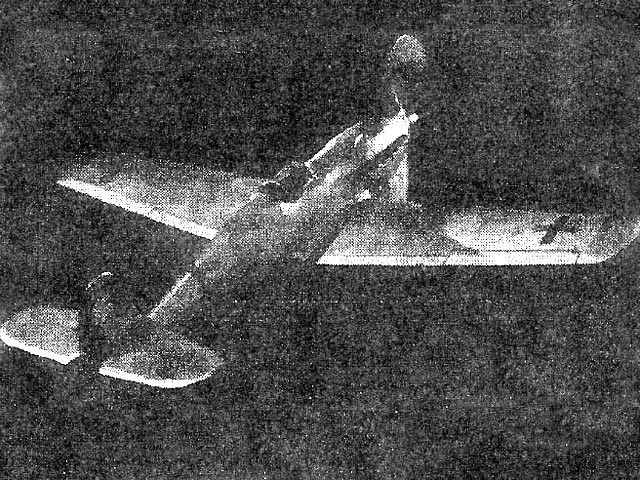