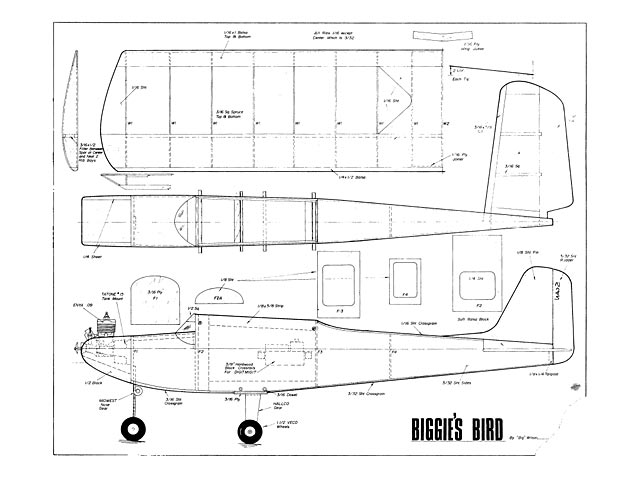 Quote: "Biggie's Bird. The saga of MIJ (Made In Japan), a rudder only plane, after it left Polk's Fifth Ave, NYC, to the Schroder attic, and on to the flying field under the aegis of NBC's MJ Biggie Wilson.

Once every year or so, Susan Schroder (lovely wife of your president/publisher), says: Walter! Time to clean your workshop! So Walter gets a shovel, Butch, Anthony, Karen, and some matches (not necessarily in that order), and off they go. Butch opens the window and starts throwing the big stuff, Walter shovels at a maddening pace (maddeningly slow that is), while Karen and Anthony stand outside to catch and sort. Engine parts here (they don't burn well), balsa scraps there, propeller halves here. Hey! Look at that, says Karen, it's gliding! Walter has launched a pretty little, thing; it looks like Butch has cleaned his brushes on the stabilizer, and Karen put her fingernail through the silk on the wing, but still, it is a pretty little thing. On the bottom of the fuselage it says, 'Made in Japan.'

Let's give it to what's-his-name, says Walter. He likes Rudder Only. As I am what's-his-name, I now own a Japanese RO. (let's hope I have better luck than with my last Japanese RO. It turned out to be a Kamikaze. My fault, not the plane's). Since I am a lazy hobbyist, I go the simplest route possible.

I thank Mr S for his generosity, and go home to my bench. (I should have a shovel too, but my wife is more lenient and anyway my year isn't up.) I now painstakingly install the World Engines single-channel Digit Midget. It takes me a good ten minutes, but I say, you can't be too careful. I then called Mr S and said: Let's go flying.

We met at the Baychester Club field in Somers, NY (a ten minute drive). After a good deal of trouble with the engines (plural because of TWO 049's geared to one prop), we decided to launch. At no time did we have BOTH engines going. If the starboard engine started, the port engine coasted, and vice versa and so on. Mr S gave what we call at perfect hand launch (a pleasant surprise, since he is famous for another kind of hand launch which is laughingly called the 'Vertical Dive', or more simply 'The Wipe-Out Chuck').

I was astounded and thrilled at the stability of the MIJ (Made In Japan) in flight. It was so stable it could have been on rails. The balance was perfect, but it wasn't climbing! Only one 049, dragging the other, was not enough to employ the natural climb tendency which a rudder-only plane must have to survive. With a slow climb, a rudder-only can be made to do loops, split-S's, Immelman's, etc. Without a climb, the pilot is afraid to give any signal as the plane falls off on a turn..." 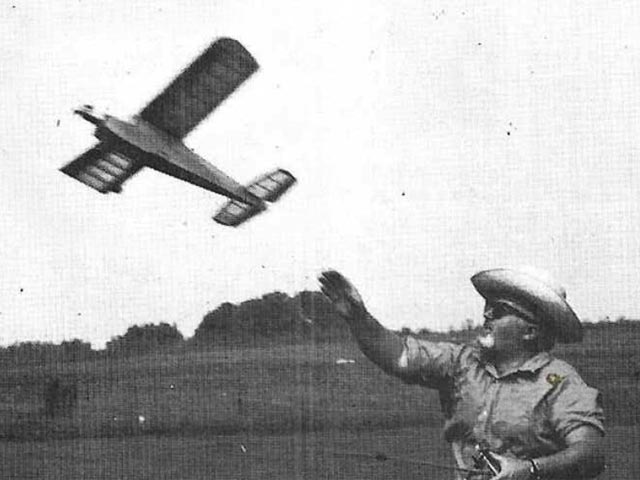