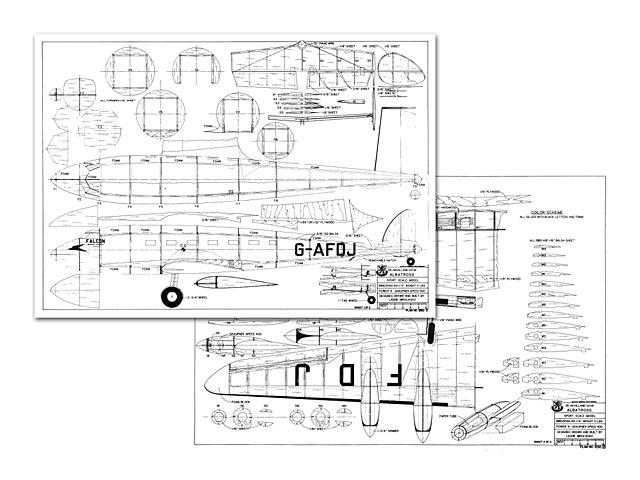 The mention of the name De Havilland is certain to evoke fond sentiments from most scale aircraft enthusiasts. This innovative and prolific company strongly influenced aircraft design from just prior to the First World War until after the second World War. The De Havilland Company became involved in almost every facet of aircraft design. Their creations included military fighters, sport planes, transports, and several highly successful racing aircraft.

De Havilland's most successful racer (arguably the most beautiful twin ever constructed) was the famous DH.88 Comet that won the 1934 Melbourne Air Race by covering 11,000 miles in 77 hours. Three weeks after this race, De Havilland submitted a proposal to the Air Ministry for a high speed airliner based on the Comet design. Initially, their proposal was rejected, but persistence by De Havilland resulted in the signing of a contract in January of 1936. To achieve the performance specified in the contract, it was necessary to design a very aerodynamically clean aircraft of minimal weight. This design was of all wooden con-struction and had a projected payload of 22 passengers. The monocoque fuselage shell was built over a collapsible jig. The inner plywood skin was 1.5mm thick while the outer skin was 2mm thick. Between these skins was a 22mm thick balsa core. This sandwich technique produced an exceptionally strong and lightweight fuselage that was certainly a precursor of contemporary composite construction. On a later branch of the family tree, this same technique was used extensively on De Havilland's famous Mosquito fighter (of course, all wooden air-craft come from good family trees!).

The engines were created by mating two Gypsy six cylinder blocks to a newly designed crankcase. The engines were air cooled by means of inlets in the leading edge of the wing on either side of the nacelles. The maiden flight of the prototype was success-fully completed in May of 1937.

A total of seven planes were built and flown on domestic and international routes. It is my view that, with the exception of present-day jet airliners, there are few airliners designed that achieved the aerodynamic efficiency of the DH.99 Albatross. These 'wooden wonders' were environmental friendly, but unfortunately they were also termite and dry rot friendly; consequently, none of the original aircraft exist in flying condition.

I decided to build an electric-powered model of the Albatross after I had successfully flown my three-engined Ballanca Trimotor (oz6026). Added encouragement came from reading excellent articles in Electric Model Magazine which is a periodical published in England. Many photos in this publication indicate the rising popularity of electric-powered multi-engine scale models that use Graupner Speed 400 motors.

I recalled seeing 3-view drawings of the Albatross somewhere in my archives, and shortly after locating them, a set of construction drawings was completed. Many multi-engined aircraft featured in European model magazines show a growing trend towards using Styrofoam as the primary building material, or sometimes Styrofoam combined with balsa. As a side note, when I was living in Czechoslovakia, in the early 60's, I had no balsa with which to build models, and even Styrofoam was not readily accessible. By chance, one day I came across a sheet of white Styrofoam. After picking this sheet up and finding it so light, I was immediately dreaming of ways to use it as building material. I recall sanding it to approximately 1/4 in thickness and, of course, there was foam dust everywhere! I constructed a small R/C model by using this sheet for the fuselage sides and tail surfaces. These components were then covered with Japanese tissue using white glue to bond it to the foam. To my delight, this model actually flew quite well. Subsequently, I was able to purchase balsa, and this has been my primary building material up to the present. Returning full circle, I have recently begun to construct some of my models using Styrofoam and paper.

On the Albatross, I decided to build the wing and tail surfaces in the conventional manner, using balsa and spruce. The fuselage, however, is a combination of balsa stick frames with formers on the outside acting as guides to achieve the desired fuselage shape. Blue Styrofoam occupies the spaces between these formers. The nacelles are constructed using only formers and Styrofoam. Brown wrapping paper was used to cover all of the foam. On my next project, I intend to use foam exclusively. Since I have access to a paved runway, I installed a fixed main undercarriage, a steerable tail wheel, and working rudders. This model could be built to be hand-launched, and in this case the undercarriage and working rudders are not necessary.

Construction. To start building, cut out all of the parts accurately. The wing should be made first, since it will be needed as the fuselage is being built. The wing is built in two halves which are Bottom LE sheeting, ribs, and spars glued in place, joined later. Punch out holes in the ribs to route the NyRod cables and motor wires. Pin the bottom leading edge sheeting to the building board directly over the plan and glue the bottom main spar to it..." 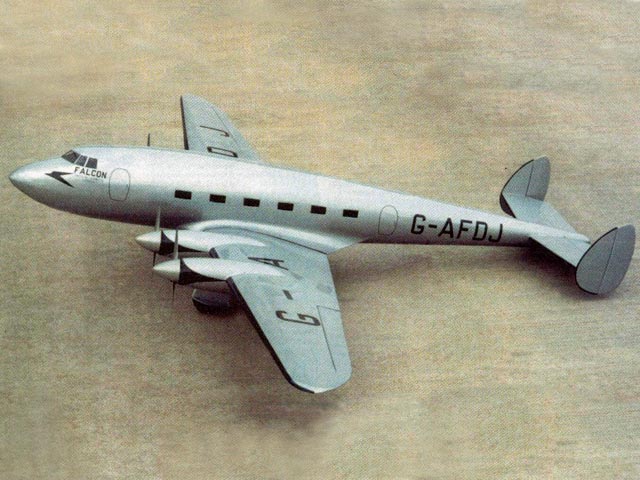