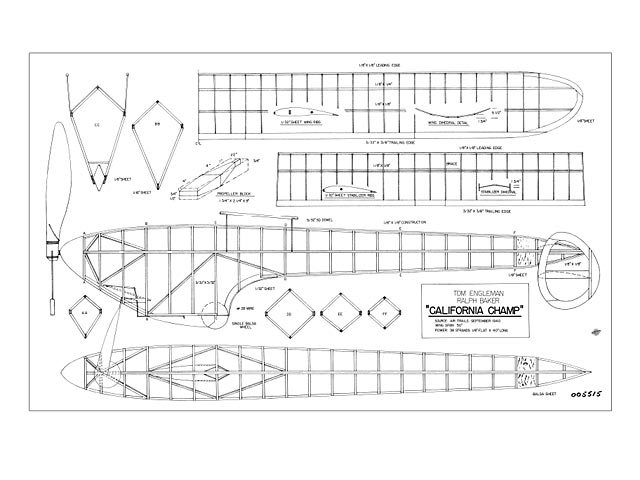 Design by Tom Engleman. Article and build by Ralph Baker.

Quote: "Winner of Coast eliminations for 1939 Wakefield, threatens to disprove adage that everything that goes up comes down. Best attempt? Two hrs 45 min. California Champ, by Tom Engleman.

JUST before the West coast Wakefield eliminations last May, I got together with one of the old West coast masters, Tom Engleman, to find out if he had any brainstorms for the coming eliminations. Since he was wrapped up in his college work, he didn't have time to enter a job himself; however, he had one all designed and drawn up and he succeeded in talking me into building a test model for him.

After several weeks of work I had the job ready for primary tests - and what tests! The first hand-launched glide showed indications of a gliding ratio of close to 20 to 1. The first flight under power with about 250 hand turns resulted in a flight of over one minute (this at about seven in the morning) and I really began to get excited. The third power test (at 7:45 am) resulted in a flight of a trifle over eighteen minutes. The plane had climbed up almost out of sight and then came down within thirty feet of the take-off point. By this time I was really excited; and took the ship home before I lost it.

The plane stayed in a box until the day of the eliminations and evidently the wing became warped during this period, because on the first two flights at the meet the Champ forgot to turn, resulting in the meager times of 1 minute 47 seconds for the first flight, and 1 minute 56.8 seconds for the second. We had three flights, however - and what a third flight was turned in! She spiraled up to about 300 feet and then started in on a glide that they're still talking about. For 39 minutes she hovered above the field in sight of the timers, and then at 11:46 am she soared from sight. Thirty miles east of the field in a suburban district the plane was sighted coming down from a cloud at 1:52 pm, making a flight of 2. hours, 45 minutes.

At the Wakefield finals we were testing the planes the day before the meet, and flying as late as we were, about six o'clock, the Champ stayed aloft for about five minutes and terminated its 'tune-up' flight in a tall tree. In recovering the sky king, it was damaged beyond immediate repair, so I flew another one of my jobs in the finals.

After the plane was recovered it was overhauled, and then turned in some actually sensational performances. Most of the flights that have been made since the Wakefield finals have been exhibition flights; it has been entered in no other contests. Three flights taken on a December Sunday morning were all over ten minutes. Flights in any kind of weather or at any time of day have averaged about five minutes. Actual gliding tests have set the gliding ratio at 17 to 1.

CONSTRUCTION: The wing has a 12 to 1 aspect ratio and an Eiffel 400 section. The L/D value of this wing is evidently very high, if the performance of the plane is any indication. Wing rack is made from 5/32 dowel and bicycle spokes.

Twin rudders are employed on this model, and we like them so well we plan to use them on all our future models. They prevent the air from spilling over the stabilizer tips and give better streamlining at the fuselage junction. We find that it is possible to obtain a more even turn throughout the flight with twin rudders than it would be with a single rudder.

This ship, even though it only has one wheel for taking off, has exceptional directional stability while getting off the ground ; this too is due to the twin rudders. The elevator is supplied with what seems to be an ample amount of cathedral. Tests have shown that this cathedral employed in conjunction with the twin rudders builds up a terrific high pressure beneath the stabilizer - giving the tail almost one half again as much lift. (You are allowed only a 33-1/3% stabilizer, and you really should make the most out of it.) The basic design of the ship is so stable that you would have difficulty making it turn as desired with the ordinary elevator. The cathedral upsets this stability just enough to make the ship easy to adjust and turn.

The fuselage is the result of an effort to bring aerodynamic efficiency to an easily constructed, strong but light body. Fuselage is built in two halves, each built on the top plan-form. Top and bottom are constructed of 1/8 squares as separate units; where they are joined together there are now two 1/8" longerons.

One of the most unusual features of the plane is its one-wheel folding landing gear. Tension is provided by a small rubber band within the fuselage to keep the wheel retracted at all times. When you want the plane to take off it is only necessary to pull down the wheel and set the plane on the ground; the weight of the plane is sufficient to keep the wheel extended. The only caution to be observed is to make sure that the wheel rolls freely and there is a fairly smooth runway available. The plane lands on the balsa skid that acts as the wheel strut.

The propeller is one-bladed and folding. Details of the hinge and tensioner are included in the sketches.

FLYING: The model is powered with thirty-eight strands of brown rubber 40 in long. Adjust model to circle in about forty-five-foot circles to the right. It is a good idea to mark the wing at the point of perfect adjustment. Plane climbs in a rather deceiving manner; it climbs in a sort of tail-high attitude and looks as though it is just cruising around. However, it ascends like an elevator and has several times gone as high as 900 feet on the initial climb. It has never been wound more than 800 turns, although the motor should take 1,000.

When you know there are thermals about, move the wing up about 3/8 in, just enough to introduce a slight stall in the glide. The California Champ will really pick up the currents when adjusted like this. " 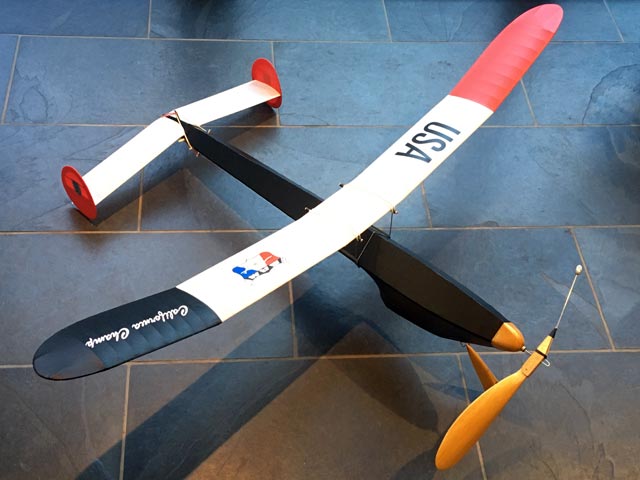