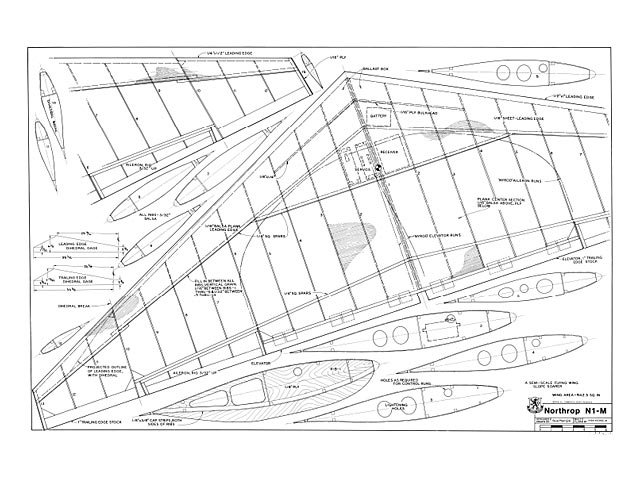 Quote: "One of the most unique aircraft ever built, the Northrop flying wing makes an equally unique and excellent slope soarer. Northrop N1-M by Gus Morfis

This model of the Northrop N1-M is really the result of a number of different forces coming together. First, the slope soarers around here began to develop along two broad paths; the highly refined, high aspect-ratio Cirrus (oz8532) types and the close-coupled highly loaded flying plank designs. Both have their place and their admirers, but to my eye the development potential was not there. About the most 'improvement' possible was to change the shape of the vertical fin to something mure stylish.

Second, my working at Northrop Aircraft developed my interest in Jack Northrop's Flying wing designs. I don't think that anyone who has ever seen one of his Wings fly went away unimpressed. They seemed 'right' and 'natural' somehow, evoking that old saying that something which looks right will probably fly right, which apparently they did. I had long felt that the Jack Northrop's wing concept would have potential on the slopes. Its appearance would be distinctive; no mistaking these drooped tips and highly tapered surfaces for anything else around!

There is no vertical tail on this model and none is needed, since the toed-in drooped tips provided all the directional control the model needs. It is something weird to stand underneath the model and notice that there is not the slightest tendency to yaw or hunt. Aileron and elevator provide instant turns - in fact, there is a tendency to yank the model around. However, as soon as the controls are released, the N1-M settles into its new heading with no fooling around. Like most clean designs, this-wing is fast, and the absence of fuselage and empennage drag is very evident.

Construction. Our construction approach is novel but not difficult. Using the building jigs will result in your putting in the correct amount of twist, dihedral and tip-droop automatically, as well as holding everything steady while you install all the small hits. The absence of the fuselage and empennage makes the whole thing that much simpler to build, which means you can get out on the slopes faster..." 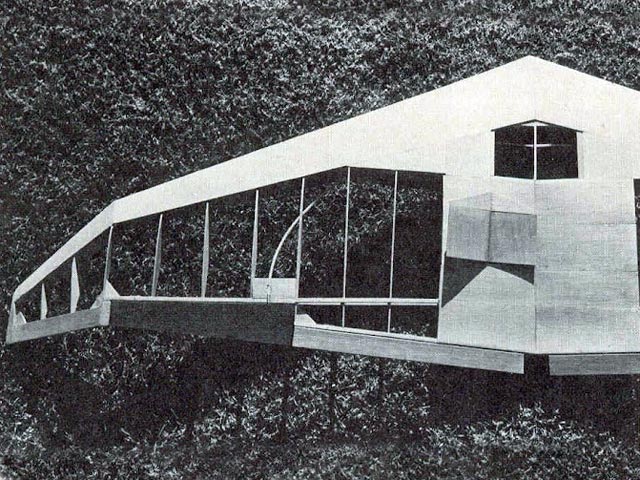