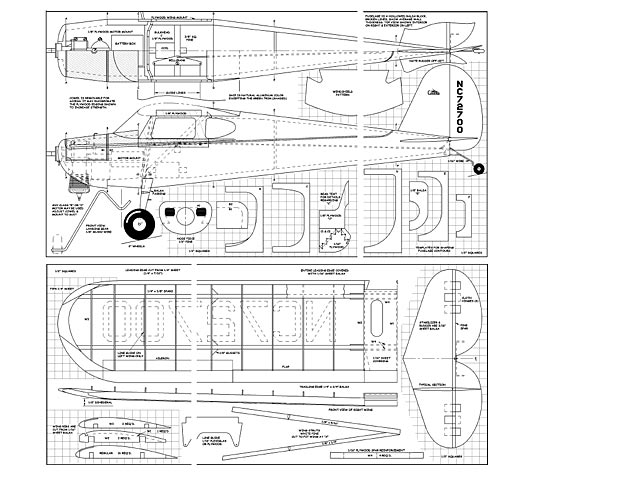 Quote: "Build and fly this exact scale 43-in control-line version of the popular Cessna private plane. Cessna 140, by Earl Stahl.

OUR journey half way across the continent to Wichita, Kansas, last summer served a dual purpose for in addition to attending the National Model Airplane Championship Meet, we had arranged with the Cessna factory to have a sleek new Cessna 140 ready to be flown away. Since that time we have logged hundreds of hours and have found the 140 to be a reliable, comfortable craft capable of flying as far as one cares to go without becoming tiresome. Most every modeler has wished at one time or another that he had the man-carrying airplane of his latest model so he could leave the bench and balsa for some real flying. In this instance, however, the opposite was true so we busied ourselves at the drawing board and workbench to produce the craft that is the Mehanix Illustrated model this month.

The little 140 faithfully captures the snappy appearance and good flying qualities of the original. The Cessna company supplied data for the project to insure an exact reproduction with no deviation from scale.

Aerodynamic proportions are so favorable we believe this model would make a good free flight ship - with the addition of more dihedral, of course. The excellent proportions coupled with a low wing loading contribute to produce a swift, easy flying model that is rugged and practical. The original was powered with a Forster 29 engine but any power plant up to .49 cubic inch displacement can be used. Before you start construction, it is suggested that the plans and text be studied thoroughly. Full size plans are a tremendous help so dash over to the neighborhood hobby shop and pick up a set. Once you have purchased the necessary supplies, the job can be started.

On the original model a carved fuselage was used. However, those who prefer the usual built-up, planked fuselage will find they can easily change the plans to suit this type of construction. To make the fuselage, two pieces of balsa measuring 2-1/2 x 5-1/2 x 25 in are used. They should be medium grade stock of the same quality and grain. Spot-cement the pieces together with paper between so they can be broken apart later. A section the size of the cowl hatch is next cut out and spot-cemented back in place. Now lay out the side and top views, minus the nose piece, on the block and cut the fuselage outlines. Notice that the side view at the cabin is cut along the lower line of the windows. Cut the notches for the landing gear and stabilizer at this time and then remove the cowl. Cement the 1/16 in plywood formers A-1, B-1 and B-2 in place.

Prepare for a deluge of shavings when carving the fuselage. Trace the templates on stiff cardboard so the cross section can be easily checked. A small block plane, a sharp knife, a chisel and gouge plus plenty of sandpaper and patience will produce the desired result. Next, carefully separate the halves and hollow out the inside to the approximate wall thickness shown on the plan. Before re-cementing the halves together, cement bulkhead E in place in one fuselage half. Cover the other edge with cement when cementing the halves together permanently.

The plywood wing mount-window frames are next attached. First cut both from 1/8 in plywood and then notch the fuselage sides before mounting. Work very accurately and align them exactly as shown on the plan. The landing gear assembly comes next. This unit not only carries the landing load but it is also used to strengthen the wing mount. Cut bulkhead C from 1/8 in plywood. Bend the steel music wire strut to the shape indicated and then divide bulkhead C with a 1/8 in cut to conform with the bend in the wire. Now cement C and the 1/16 in plywood bulkheads C-1 and C-2 together. When this unit is dry, drill pin holes through and sew with strong thread or cord. Cement the whole unit well. To insert the assembly into the fuselage, first cut the projections off the top edges and then slip it through the slot in the bottom of the fuselage.

The engine mount is cut from a single piece of plywood. It is as wide as the entire nose and is shaped to accommodate the engine and gas tank. These must be made in accordance with the specifications of the engine being used. The original model was powered with a Forster 29 and the mount shown is for this engine.

The original model also contained a battery box resting on the rear of the motor mount. Since different builders like various ignition units, this may be changed as desired. Notch the nose down 1/8 in and fit the mount to the fuselage before cementing it fast..."

Note this is a tiled plan, spread over 12 pages. 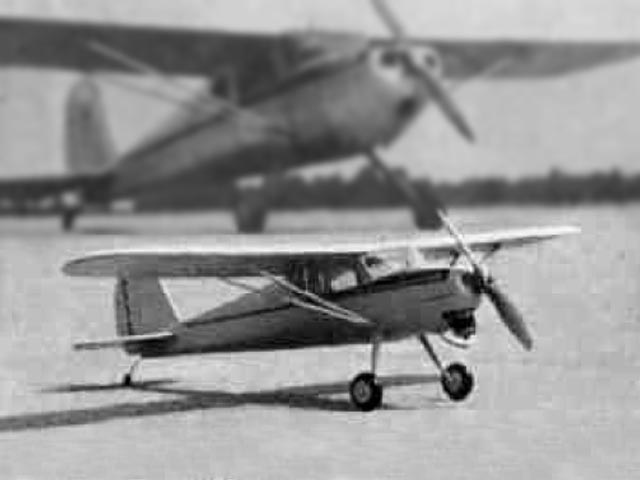