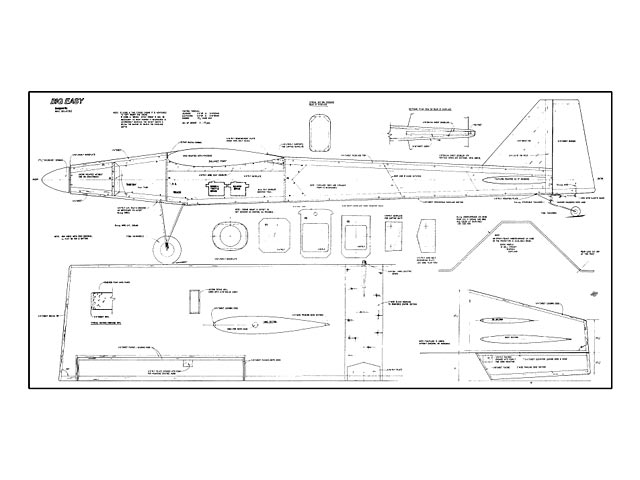 Big Easy was born out of a need that I had for a general purpose model that would be large enough to use as a test bed for engines in the .60 -1.20 cu in range. The particular engine that I had in mind was the Super Tigre S90 K, which was to power a Pica Jungmeister that I was in the process of building at the time. As the Rival (oz10431) featured in RCME, August 1993, had proved to be an excellent all rounder for smaller engines, the lines and the general lay out of the new model were already well established in my mind, so it was just a matter of adding some dimensions to my thoughts and putting it all down on paper.

Big Easy has a very wide performance range and when powered by a .60 motor fitted with a standard silencer you will have a super smooth flying machine with plenty of aerobat-ic potential, whereas engines in the .90 -1.20 range will allow the extrovert flyer great freedom of expression.

As the name implies, this is a big model that goes together very quickly. The prototype used a foam wing as this was the quickest and cheapest route. The finished model tipped the scales at exactly 7 lbs. The design uses a fully sectioned foam tailplane and I would advise against substituting this for an all sheet flat plate version.

When I was looking at the possible alternatives for the undercarriage, I came to the conclusion that an epoxy/glass version, although more costly than the traditional types, would be ideally suited to the purpose. I sent some details to Glens Models in Renfrew, Scotland and a short time later I received the finished article through my letter box. It was the first time that I had used a glass undercarriage, but I don't think that it will be the last. They are extremely strong, light in weight and can also be painted to add that extra bit of class to the finished model. For the traditionalists among you, or those operating on a limited budget, a piano wire alternative is shown on the plan, but a commercially available dural version could also be used.

On the whole I was very pleased with the way the prototype turned out, but if using a two stroke engine, I would definitely use some form of 'soft' motor mount to further reduce the noise and minimise potential vibration problems.