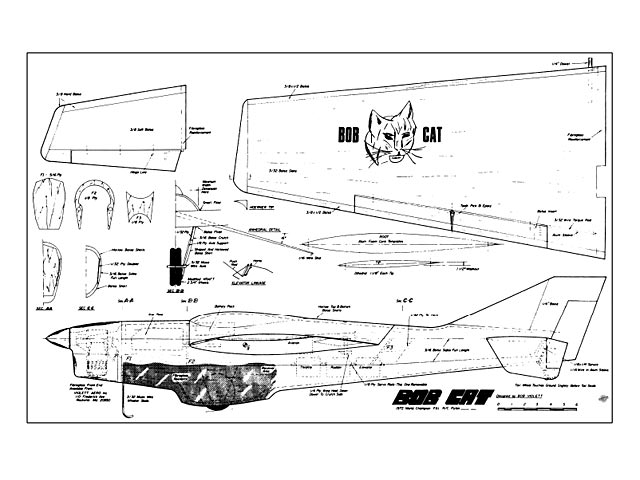 Quote: "Its name befits our team effort: 'Bob' (the first half of Violett) and 'CAT' for Clifford A Telford. It began to take shape in my mind during a discussion with Cliff over a martini in a friendly pub during the Toledo conference.

Looking closely at the rules, we found them confusing in that one paragraph refers to the model as 'semi-scale' and another references it as a 'prototype.' Further study revealed that the wording was borrowed from the FAI Control Line Team Race event. The Round and Round group had realized a speed advantage from minimum airplanes built to these specifications, so why couldn't we? We felt that to defend our 1971 title we would need such a machine.

Actual construction began in May with the intent of getting one contest run on the plane before the Nat's. Time also flies, so we had to settle for a few test flights instead and, as the story has been told, takeoff problems down and cross wind cost us dearly. A simple addition of whisker-like skids to the nose area solved this problem and guaranteed us a takeoff with a full blade under any condition of wind. The resultant parasite drag cost about two seconds in elapsed time.

With the skids attached, Bob Cat tends to porpoise a bit when landing on a hard surface unless you can accomplish a full stall three point touchdown. It prefers the grass and so do I. Although no damage has resulted to date from the porpoising, I get a little tense watching it bounce.

A look at the frontal view tells most about the design concept. The cross section approximates a diamond obtain-ing the minimum dimensions at the cockpit and wheel housing. It seems that the most controversial element of the aircraft is the landing gear. The rules do not tell you where to put those oversize wheels but simply that you have two functional 2.67 in dia wheels. Solution we arrived at seems the most logical to us when considering drag. Perhaps they should be moved forward a bit but then the prop clearance will decrease or the fuselage depth will increase - everything is a compromise. The wheels shown are modified Kraft Hayes 2-3/4 units. Disassemble them and turn down the inside of the hubs as much as you dare, then slim the tires to match. This landing gear system saves the weight of conventional wing installations since there are no hardwood blocks and associated bracing and epoxy. Drag advantage is obvious in that the wings are clean with no wire struts and the fuselage has to be deep at that location anyway. Thus the requirement to have 'two functioning wheels' is fulfilled.

The anhedral stabilizer serves a ground stability function and possibly yields some benefit while airborne. Aerodynamics for model airplanes is a much belabored subject but without the benefit of wind tunnel testing, who really knows what's going on? My design work is empirical - that is, I steal where I can, trial and error, and try again.

While on this subject let's discuss airfoils. We want a model that takes off and lands easily and predictably, one that flies smoothly on the straights and turns well. To accomplish this, I use a flexible curve and draw a few gentle lines about a point of maximum camber and percentage plots, keeping in mind that this machine will operate at a maximum of 150-170 mph, not in the transonic range. Laminar flow is perhaps our goal but I can't tell you how to achieve it. Scaling down full size airfoil data designed to be laminar at two to three times our speed and with quite different Reynolds numbers will guarantee us nothing..." 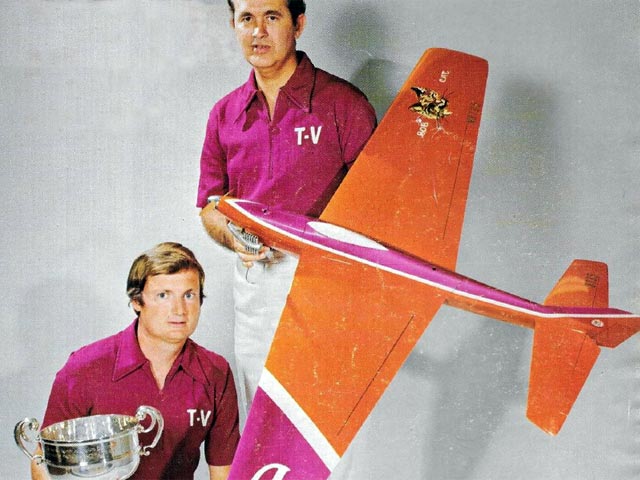