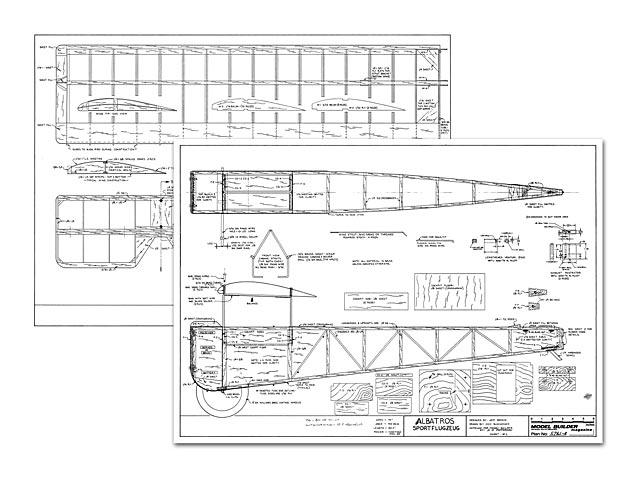 Quote: "Though of conventional construction, this model still manages to be just a little different in many subtle ways, not the least of which is the clever engine set-up - economical and quiet. Albatros Sportflugzeug, by Jeff Breece.

Albatros Sportflugzeug (Sport-flook-zoing) means 'Albatros Sport airplane.' Powered by an uncowled 30-40 hp Bristol Cherub engine, the Albatros was designed to get a piece of the ultra-light airplane market which was expected to open up after the Great War. The model presented here is essentially a blow-up of a 1953 Cal Smith design Blunderbus (oz675) which appeared in Air Trails. My machine was designed to fly for fun, with the minimum of controls, to serve as a trainer, and to fly at air shows. The Albatros has all the atributes I was looking for - authentic lines; eye appeal; slow quiet, realistic flight; low power; fuel econ-omy; easy and traditional construction; simple R/C installation; and more. The project has been successful beyond my fondest dream.

The Albatros' first flight started with a beautiful tail-up ROG. A shallow climb off the grass and it's flight was light and smooth, the model flying in a slightly tail high attitude. When the engine quit, the model just flew on until it settled in for a tail-up landing with a nice rollout. Every flight since has been a carbon copy of the first, unhurried and smooth. Instead of jangling the nerves, it's highly muffled engine and smooth flight give confidence to even the greenest pilot. One guy, who happened by the field last summer, happily flew out three full tanks with only verbal assistance from me, his first R/C flights ever.

At the 1975 Boeing Management Association contest at Kent, Washington I took 1st in Open Standoff Scale. Nine flights were flown that afternoon; eight perfect demonstration flights and one official flight on which I blew the landing - naturally! I always choke when it counts. On one flight, before the eyes of 600 or so blinking citizens, I turned in a 25 minute plus thermal flight. Never over 3-400 feet, lift was everywhere, and I only landed because I became sheepish about hogging the channel.

The real reason for the existence of the Albatros Sportflugzueg is the annual Northwest Kidney Center Benefit Air Show put on by the Radio Aero-Modelers of Seattle. The RAMS have been sponsoring this benefit for several years now, and last year presented over $2,500 to the Kidney Center. Thousands have thrilled to the sights and sounds of Pattern, combat, WW I and WW II scale, and R/C planes of all kinds. A divorce and work have kept me from participating the last two shows, but on the 5th and 6th of June, 1976, I hope to debut my Albatros in the event for which it was designed and built during a three week period in 1974. Finally I'll be able to share a little piece of myself and assist in a worthy work. If you're in the area drop by the fun and say Hi.

Model specifications are: span 74 inches, length 39-1/2 inches, and wing area 703 sq in. At a weight of 4-1/4 lb, the model is powered by a muffled Fox .36 turning 5,000 rpm on a 12 x 6 maple prop. Engine speed is controlled by prop size and exhaust restriction. Fuel economy is unbelievable - over six minutes on one ounce of fuel! Noise reduction is dramatic too.

Among special features are: the simple, straight 3/16 music wire landing gear with snapring wheel keepers; bike spoke wing hold-downs and pop-out wing strut mounts; removeable firewall (mounting engine and tank) for radio access; and full-flying rudder. Most notable too, is the two-cylinder engine, which is really a Fox .36 with a dummy cylinder welded to the crank case. No throttle is fitted, and all landings are dead stick. Radio installation is designed for inexpensive 2-channel bricks mounted transversely behind the firewall, with batteries underneath. The prototype presently sports a Hobby Lobby 3, with the servos mounted on a 1/8 plywood plate.

Construction is conventional and, for the most part, no comment is necessary, as the plans have been carefully prepared to illustrate difficult areas of con-struction. The airplane was designed as a complete system, and every element was tailored to fit the special requirements of the machine. For example, the engine/firewall/tank assembly weighs 21 ounces, and produces the power of a .15. The use of a smaller engine will make balancing difficult and performance will suffer.

The fuselage must be built first, as the size of the cabane assembly determines the location of the brass tubes in the wing center section. Select four very hard pieces of material for the longerons. Careful fitting of the fuselage parts adds considerable strength and makes a most attractive structure. Use Wilhold or similar white glue for all construction except for installation of F-4, F-5, F-6, F-7, the cabane assembly, and the landing gear mount, where Hobby-poxy Formula II is used.

Bend up the cabane struts and install the .025 brass wing strut mounting tabs. Don't bind and solder the cabane assembly at the top until it is securely fastened into the fuselage and the fuselage is complete..."

Note see Mary's page at https://rclibrary.co.uk/title_details.asp?ID=2296 for download of the complete MB magazine, May 1976. 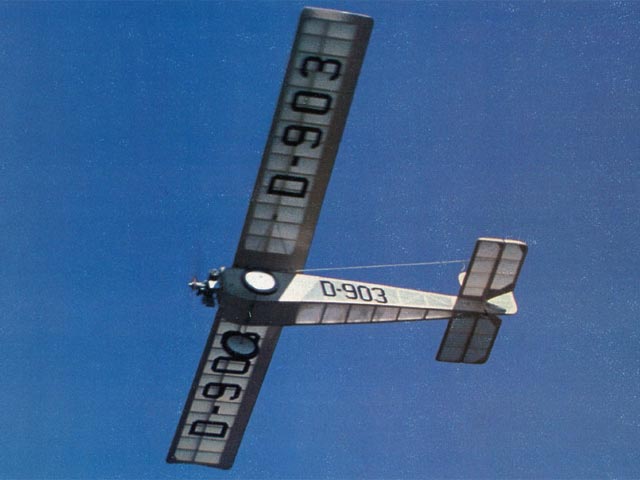 Hi Ya Steve and Mary, Hope you guys are doing ok. Coronavirus has afforded a wonderful opportunity to build so I got started on Albatros (Blunderbuss) and also got the enlargements done for Inflammable, Black Bullet and Red Admiral.. all for later in the summer.. I did a little tweeking on the Albatros structure because of the much heavier Saito FA-60T twin which included sliding the firewall aft and strengthening the wing dihedral braces and attach fittings plus a full "D box" leading edge for torsional rigidity. I made the exhaust stacks. Had to have a "Minion" pilot. Lift struts to go. Here's a coupla snaps [pics 007,008], better pics when she flies. Love the website and as always, you both have provided some sanity in a world gone Loony-tunes. Thank you more than you know. Take care. Al and the Greyhounds, AMA255724
Al - 24/03/2020
Add a comment