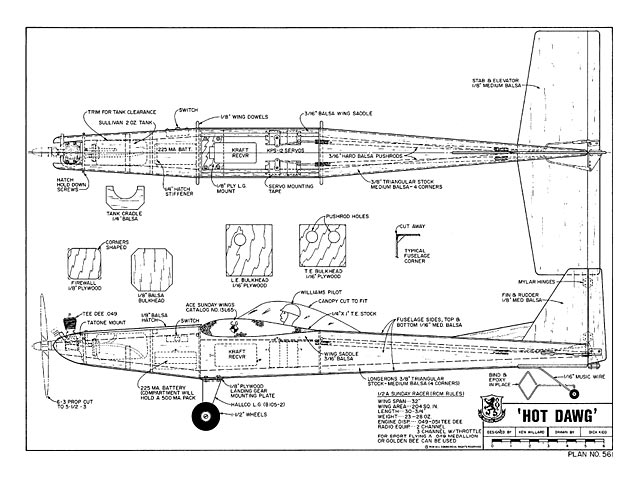 Quote: "A quiet and inexpensive to build and maintain Half-A Racer. Hot Dawg, by Ken Willard.

Remember when you were a kid? How much fun it was to 'race' anywhere, with anybody? And all you had to do was run faster. When you started racing with equipment - skates, bikes, and as time went on, cars, boats, and for some of you, even airplanes. But it was getting too expensive and in some cases, too dangerous, so you tended to stifle the desire to race, Said you really weren't interested. But if there was a model at you could race, you would. And did.

But even models have a way of getting too expensive. This, of course, is relative, but not too many modelers can afford the sophisticated equipment used in Formula I R/C racing - and those who can have trouble findin the time to build one.

So, as equipment became available, racing of small RAC models has become entirely practicable. The 1/2A engine puts out all the power you need, and a two channel radio gives you all the control you need. But how about the time to build?

That's where the Hot Dawg concept came from. It seemed to me that if a racer could be put together in a few hours instead of a few weeks, it would have an extra appeal to the modelers who only have a limited time for building.

After watching a couple of 1/2A races, I noted that those with foam wings seemed to be pretty competitive, and I knew from some experiments that I had made with Ace foam wings that they were strong enough to take the G loads of those pylon turns. So wings would be no problem.

How about the fuselage? For fast building, it should be a slabsider. But they don't look streamlined - even though for 1/2A racing they are fast enough. So, let's compromise - make a slabsider with triangular stock for longerons, then round the corners and fool the fuselage into thinking it's sorta' oval. And, by keeping the lines straight from nose to wing on top, nose to landing gear on the bottom, then straight back from the wing and the landing gear to the tail, but at a different angle, you don't notice the break in the lines, and a pleasing appearance results. Since the lines are straight, though, it's easy to glue the triangular stock to the sides without resorting to a lot of pins to hold things in place.

Sheet balsa for the tail surfaces. Can't be simpler. A Kraft or Tatone mount for the 1/2A engine, bolted on the front; Halico landing gear with Veco wheels; plenty of room for whatever radio you prefer. Finish with your favorite material. About ten hours work, and - Hot Dawg!

For what they are worth, here are a few thoughts on the design concept for the aerodynamic viewpoint rather than the structural aspect.

First, the long nose comes from comments I've heard experienced racers make to the effect that the long nose seems to help a racer 'groove' on the course.

Second, the location of the stab on the bottom of the fuselage is something I've been doing for many years. Long ago I found out with a design called Breathless (oz5842) that if I put the stab on the bottom, it was hard to stall and very hard to spin compared to a design which was identical except for having the stab on top of the fuselage. This tendency was very nnoticeable when rudder action was full throw or neutral rather than proportional as we have now. So, maybe it isn't really important any more. But for smooth turns I still like it.

Third, the unusually high tail wheel strut makes the model sit on the ground more nearly level, and helps to keep take-offs from getting 'squirrely'.

Fourth, using rudder and elevator control, with dihedral to induce the bank, is a combination of structural and aerodynamic factors. Structurally, you don't have to figure out an aileron linkage - or repair it after a crash (and there will be crashes). With a proper match of fin area and dihedral, the aerodynamics are such that the turns are just a; smooth as ailerons would provide.

Speaking of dihedral, Paul Runge of Ace is stocking a special set of wings, called the Sunday Wings, which have exactly the right amount of dihedral pre-cut in the tips of each panel. All you need to do is butt join two panels at the center with epoxy and the dihedral is pre-set for you..." 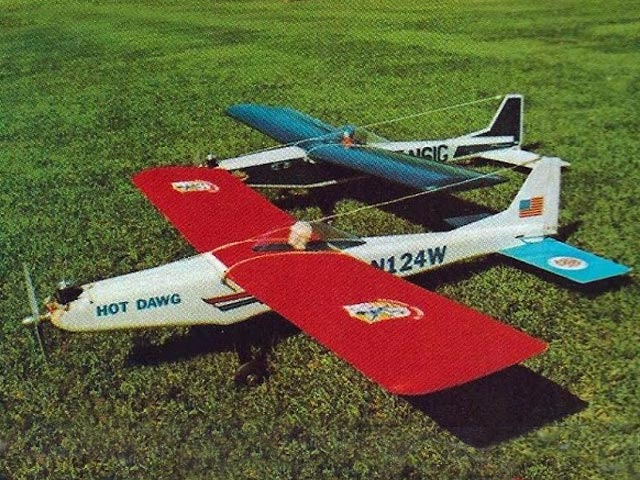