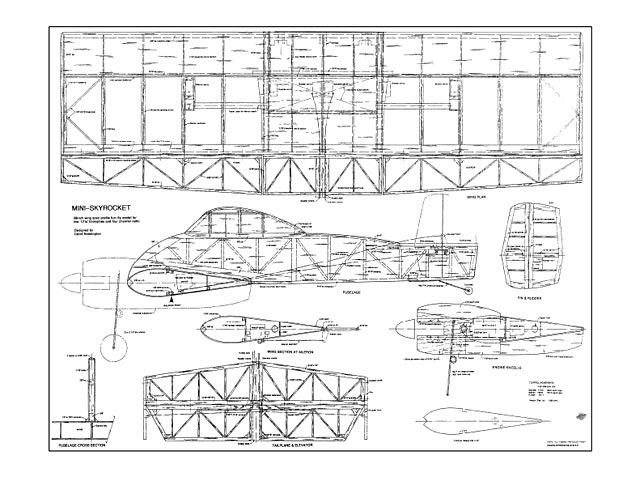 Quote: "Ken Swailes and I have a love affair - no, not with each other, no one could love that hairy monster, but with the Grumman Skyrocket. It started back in late 1998 when I was looking for an easy and safe twin-engined model, which would have a more entertaining performance than the average twin. The 52 in wing span slimline 'Skyrocket' was the result and it exceeded all expectations with regard to flying characteristics, especially its ability not only to fly one engine, but to perform most of the aerobatic schedule on one. Such are the safety margins of this Boddo-friendly aeroplane that the prototype model, now five years old, is still flying and has hundreds of flights to its name.

The Skyrocket twin was followed by the Super Skyrocket, a four engined version, with two MDS 28 engines and two 18's (MF plan no. 12, April 2000), and this also is still in the land of the living; it has not been flown as much as the twin version, simply because it is rather large to cart around, but it is a tour-de-force in the air. One Skyrocket which proved to be less than 100% successful was the 1/12th scale combat version. Yes, it flew, but it hadn't got the excellent and highly manoeuvrable qualities of the fun-fly types, so that one was dumped.

I then decided that I wanted a smaller profile fuselage model of the American experimental twin, of a size that would easily fit into the car, together with the four or five other models which accompany me when I go to the MAA model flying weeks. Hence the present Skyrocket, which follows the good manners of its predecessors, although it is a little faster in flight and won't slow fly to quite the ridiculous levels of the larger types. It remains impeccable on one engine without worries and over-shooting on one engine carries no fears. For these reasons it is not a good twin trainer, you won't find many scale twins as forgiving as this model.

0S15LA engines were used on the model, but any combinations of engines from 12 to 15 should be OK. You could probably use dissimilar engines, but if you do, use the more powerful one on the starboard side. It is an easy build, but try to avoid the temptation of 'beefing up' the structure, for one thing it doesn't need it and, more importantly, lighter models fly better. Use mini servos, there's no need to go to micro types, a normal receiver and a battery of around 300 to 400 mAh.

No additional ballast was required to obtain the correct balance point, I haven't experimented with different locations, but I don't think that it would be too critical. Start with the designated position, even if some nose weight is required and then remove it gradually, test flying each time.

One change I have made is with the positioning of the fuel for the starboard engine. On the prototype it was situated outside the hatch area and, naturally, that was the one to spring a leak, in the fuel tubing, and to contaminate the structure. It is now moved inside, where it can be got at, this means the fuel feed line has to be taken through the engine nacelle, a small price to pay for peace of mind. The larger versions had supporting struts for the tailplane, I haven't fitted them to the 'Mini', but you could use ali tube struts, from the underside of the fuselage to the main spar, if you wished. No more rattling, let's get building..." 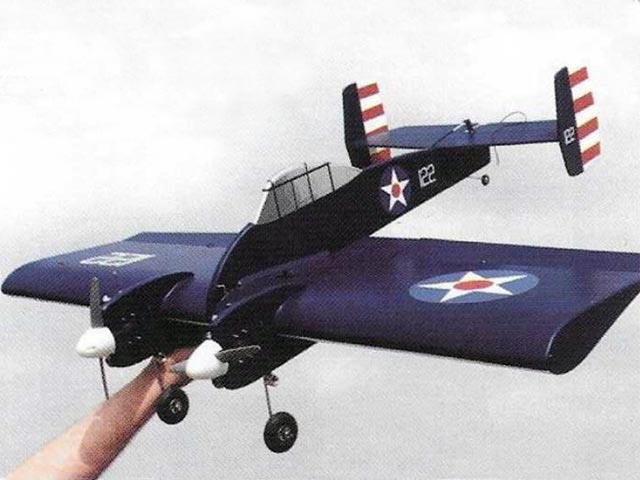