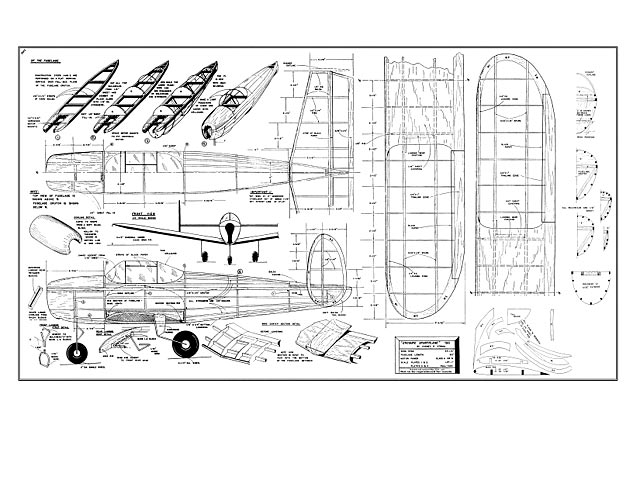 Quote: "An Ercoupe from Lilliput. A stable low-wing scale sport plane with unusual flying ability that is easy to build. By Sydney Struhl.

JUST prior to the United States' entry into this second World War the light-plane activities in this country was on a terrific upswing. Second-hand planes sold as cheaply as autos and plane manufacturers were offering flight instructions with every new ship purchased. Things were boomin'. Then along came the war and with it all the necessary restrictions and regulations needed for our defense. Aircraft manufacturing turned its full attention to getting the best equipment out to get this war over as soon as possible. And that is as it should be.

All this adds up to the stalemating of lightplane activities for the duration, but with the promise of great advancement after the war.

One of the newest and finest lightplanes to be produced is the Ercoupe. The Ercoupe is a two place airplane ideally suited for transportation or training. ()f the $2,000 class, the Ercoupe looks more like a snappy military pursuit job than a sportplane. Unusual points of interest in the ship is the tricycle landing gear, twin rudders and practically all metal construction.

Perhaps the most important feature of the Ercoupe is its ease of handling and performing. The Ercoupe is certified by the Civil Aeronautics Authority as 'characteristically incapable of spinning.' And the ship does have amazing stability - it will not get out of control. Even with the wheel full back, straight flight can be maintained or turns performed at will. It is absolutely impossible to spin the ship. The quick takeoff run, fast climb and high sustained cruising speed of the Ercoupe provides point-to-point transportation which will surprise and please the private pilot. On the ground as in the air, the plane handles with great ease; no nose-overs are possible even with full application of the hydraulic brakes.

The Ercoupe's structure is all metal, is the covering of all but the outer wing panels. The use of corrosion-resistant aluminum alloys in structure and covering brings to the lightplane pilot the dependability and freedom from maintenance of the large transport planes.

Powered with the Continental A-65 engine, the plane has remarkable performance with surprising economy. Maximum speed is 117 mph and cruising speed is 105 mph. Cruising range is 350 miles and the landing run is only 200 feet. Fuel consumption is but 4 gal per hour.

As a scale gas model we claim that the Ercoupe performs just as well as any other model even thought it is a low-wing design. You know that a low-wing model can be designed to fly just as well as any parasol model if certain aerodynamic principles are observed; such as proper distribution of your forces (CG, CLA, CP) and the correct setting of attack of the plane and thrust line..." 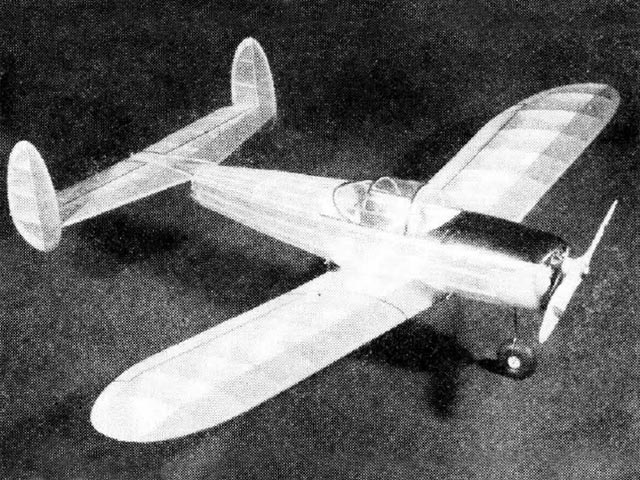