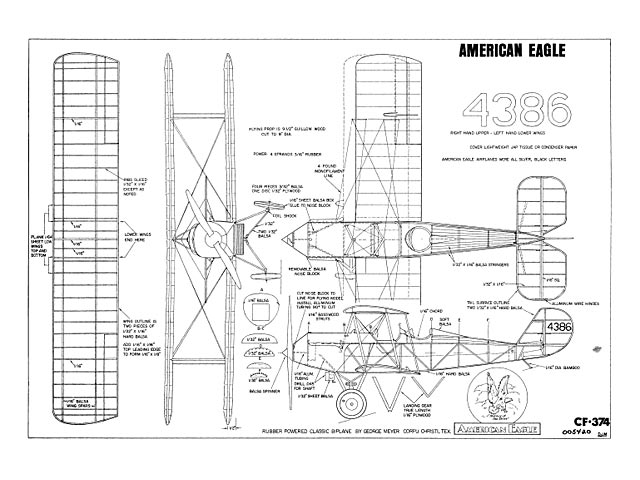 Quote: "This 1929 biplane in Rubber Scale combines design and detail in a memorable model. American Eagle by George Meyer.

The popular American Eagle biplane as powered with the Curtiss OX-5 engine had been built in good number throughout 1928, and at least 300 of these craft were already flying in all parts of the country. The likable American Eagle, though never hailed as a truly outstanding airplane, was a pretty good average for that time; it flew well and had no great vices and though it never enjoyed the popularity of the Waco or the Travel Air, it was well liked by a great many. There are some of these old eagles in existence even yet, and one or two are known to be flying. Possibly someday more will be rebuilt and will fly again.

The model A-1 was built by the American Eagle Aircraft Corp at Kansas City, Missouri, an enterprise that was deftly guided into being by EE Porterfield Jr as the President, who in later years organized the Porterfield Aircraft Co, which built the popular Porterfield light monoplane of the thirties.

The standard color scheme of the Eagles was all silver with burnished swirls on the engine and cockpit cowling, prop spinner, and wheel fairing discs. The American Eagle really was a handsome airplane and looked very nice done up this way. It has ideal proportions for a Free-Flight scale model with plenty of area in the tail surfaces and a good wing rib airfoil for a rubber scale model.

Construction Techniques. Build the fuselage first in the conventional manner using 1/16 sq basswood or very hard balsa. Construct both sides, one on top of the other. After they are dry, slice them apart with a razor blade back to the tail post. Put in the cross-pieces as shown on the top view. Cut the bulkhead of 1/32 sheet balsa and install the 1/32 x 1/16 balsa stringers and the 1/32 sheet balsa on the front section of the fuselage as shown on the plans.

The wheels are built up of 1/32 plywood and 1/8 sheet balsa all glued together on a 1/4 in dia dowel. The dowel is used as a mandrel to hold in the lathe or drill press to turn the correct contours (note the off-set in the wheel side plates). When finished shaping, cut the dowel off flush with the wheels and drill and glue the 1/16 dia aluminum bearing in place..." 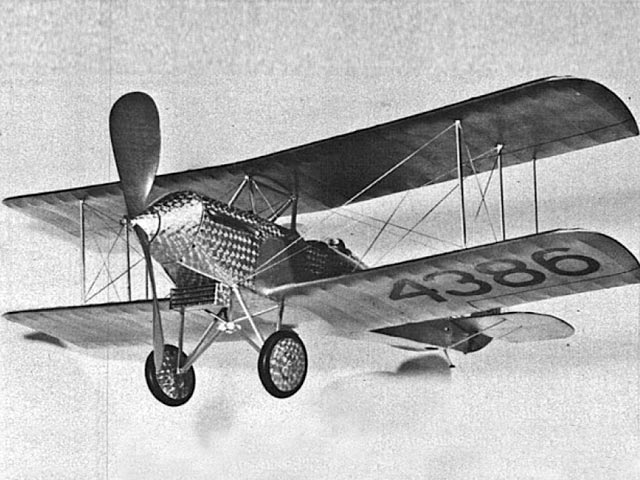