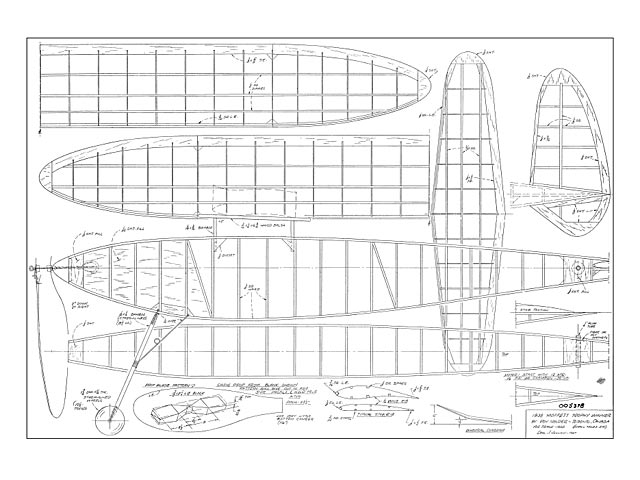 Quote: "THE United States has lost the Moffett Trophy for the second time in the six years it has been in competition. In 1936 at Detroit Vernon Gray of New Zealand won the trophy flying his entry by proxy. Canada has always sent a strong team to the Moffett contest, and their victory this year was the result of much serious preparation.

Nelder's winning flight was 5 minutes and 17 seconds. He had made a flight of 10 minutes and 37 seconds to win first place on the Canadian Moffett team in the eliminations held previous to the Detroit meet. Fortunately, the model was recovered undamaged after both these long flights.

Flying conditions in Toronto and the surrounding parts of Canada are quite different from those which the Canadian entrants encounter during contests in the States. They seldom have calm weather in the early spring - and such weather is necessary for test-hopping the models built for the spring and summer contests. The wind cuts down duration and is responsible for many unnecessary crack-ups. Nelder's Moffett Winner showed no evidence of crack-ups despite extensive test flying and contest work done prior to Detroit. The covering and doping was perfect, without any blemishes. The propeller was doped to a high luster free from nicks and burrs. Close inspection of the model after its winning flight made it seem as if it had just left the workshop. This is a tribute to the construction skill and good flying judgment of Roy Nelder.

CONSTRUCTION: Fuselage is square-cornered, rectangular cross-section. The square longerons and bracing are built into two identical side panels, following the dimensions shown in the side view. These dimensions are referred to the thrust line and the outside edge of the longeron. The front and rear ends of the fuselage are filled in with 1/8 sheet to provide additional strength for the nose and tail plugs.

In joining the two halves of the fuselage, hold the three dimensions indicated in the top view; 1-1/4 in at the nose, 3-1/4 and 1-1/2 at the rear where the tail boom joins the fuselage. Fill in the cross-bracing to round out the fuselage to a smooth shape.

1/32 sheet balsa is set flush with the edges of the front fuselage. This planking extends back to the first diagonal brace. Before planking the bottom, the landing gear should be added. The fuselage should be strangthened at the landing gear location by two 1/8 balsa gussets set inside..." 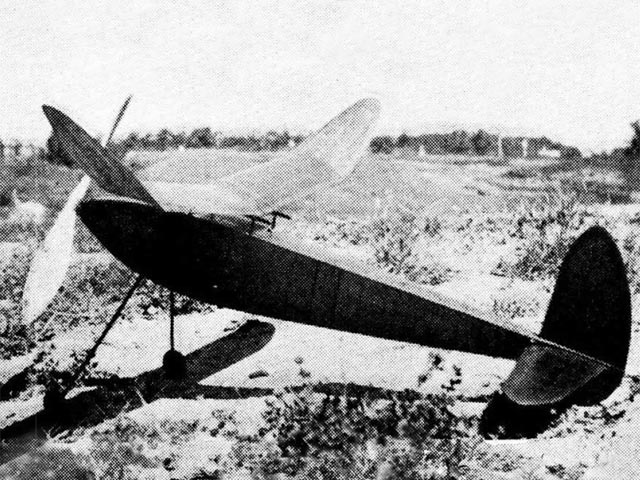