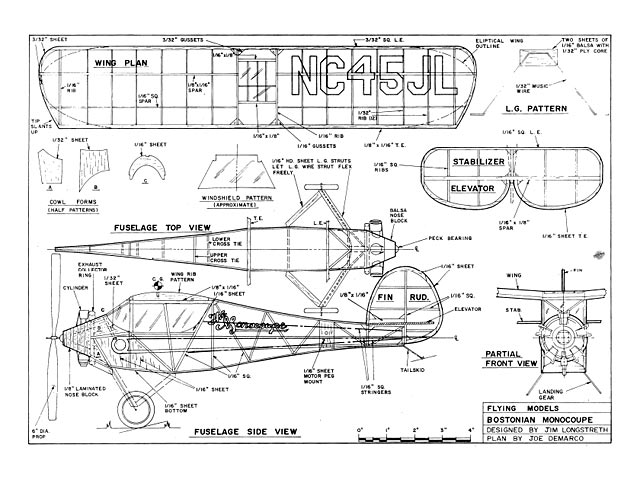 Quote: "You don't have to sacrifice scale appearance when you fly this popular freeflight event. Could be suitable for an electric conversion. Bostonian Monocoupe, by Jim Longstreth.

There were Monocoupes, Monosports, Monocoaches, Monospecials, Monomidgets, and the Monoprep. But I couldn't think of how to combine 'Mono' and 'Bostonian'. 'Mono-stonian' conjures an image of someone who belongs to a bizarre fraternal organization dedicated to a shortage of rocks. But, despite the lack of a clever name for this model, the early Velie-powered Monocoupe, models 70 and 113, combine very well with the Bostonian rules to make for a great flying model with high 'charisma' points and near scale-like appearance.

A word of caution: this design is probably not a good choice for a high endurance contest ship. It can certainly be built lighter than I've engineered it here, but I think the real beauty of this model is as a sport/scale free flight which happens to conform to Bostonian rules.

I'd like to report that this project developed out of some purposeful research and competition strategy, but the truth is I had an itch to build something. I keep a running list in my head of planes I'd like to do, both scale and non-scale, and then at such times, I match the itch with a feasible project. I tend to do a lot of Bostonians as a result.

The formula offers sound but uncomplicated construction, excellent flight characteristics, and lots of flexibility for scale-like design and appearance. On my running list the Monocoupe designs are never far from the top. This time my mind's eye drifted to the lines of the early Velie Monocoupes and I discovered a Bostonian waiting to happen.

So there I was with the itch, the plane and the time. Three-views in John Underwood's Of Monocoupes and Men, and photos of pages 12-17 inclusive show various wing planforms and bracing as well as different landing gear strut triangulations. For the most part this model is based on the Model 70, the first real production ship of the Monocoupe line. The later Model 113 had essentially the same lines but with different landing gear struts and it also was flown with trademark elliptical Monocoupe wing.

I went with the square tipped wing, but have included an outline for the elliptical tips on the plans if you want to go that route. The rear of the fuselage and tail feathers stay quite true to scale. The main wing, in proportion, looks a bit clipped when fit to the 16-inch span rule.

Similarly, the fuselage box is more narrow than true scale and of course the wing is unbraced to conform to the Bostonian rules, I extended the nose moment a bit, but it is still pretty short, so you can indulge a lot of wood and engine detail up front as you'll need the weight there for flying balance in any event. The wheel diameter is 1-1/4 inches versus 3/4 inch diameter minimum rule. The smaller wheels just don't make it in terms of appearance. The ones shown in these pic-tures were hand made from laminations of 1/16-inch sheet balsa, though a fresh pair of Hungerford's would be stunning.

The larger wheel diameter allows for some very realistic grass strip landings outdoors, particularly in late summer when the grass is burnt and short. You can just imagine barnstorming some prairie fields in times long past..." 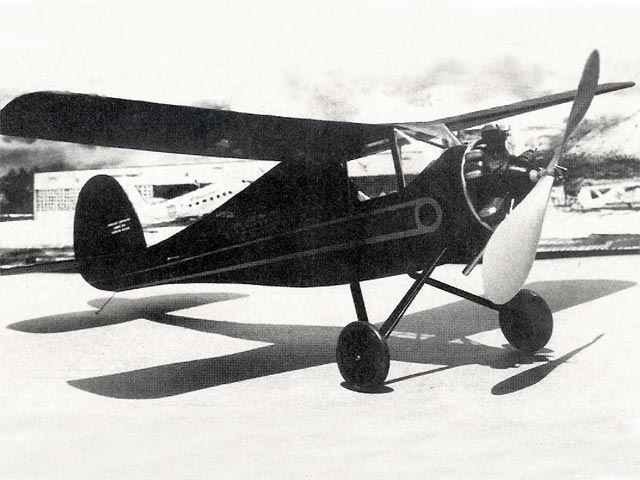