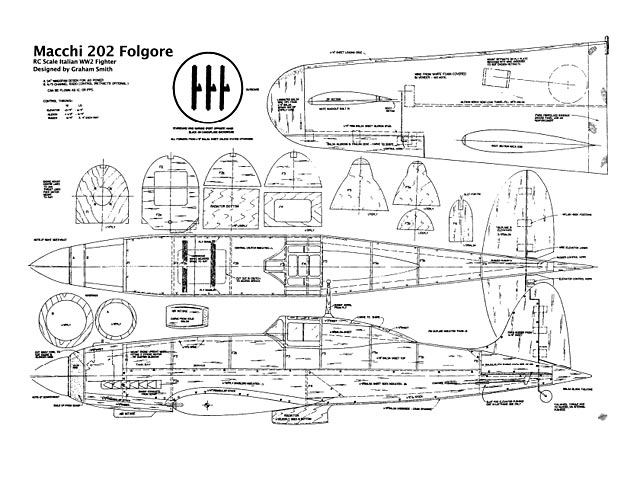 Quote: "56 inch span scale warbird for 60 power. The Other Thunderbolt! Not so well-known as the same named US fighter, the Macchi 202 Folgore is a great flier.

The Macchi 202 Folgore (Thunderbolt) was among the most beautiful fighters to fly with the wartime Axis forces, reflecting the aerodynamic flair of the designer Mario Castoldi - the genius behind most Macchi warplanes. Building upon the MC Saetta (Lightning), but offering cleaner lines and more power with the DB 601 engine, the 202 was rushed into production and fought from 1941 onwards. To many it was the best italian fighter of the war.

The more powerful DB 605 engined MC 205 Veltro kept Macchi fighters competitive, but by this stage in the war, poor industrial performance meant that only 262 Veltros were produced before the Italian armistice.

The KISS principle. I try to keep my designs simple; they have to be for me to be able to build them! The Folgore is, I hope, no exception. Although it has a cigar-shaped fuselage, there are ways we can achieve this without too many problems.

The underside of the fuselage is flat at the rear, although hard to detect in the side view, maintaining the bottom curvature on the fuselage sides and then just sheeting the underside helps trick the eye. The nose is very important to get right, as it is very much an important feature - the way in which it tapers from all sides to the nose cone. I decided to use two nose rings to help build up the balsa block to the required rough shape before sculpting with a razor plane. With foam wings and sheet tail, coupled with few formers in the fuselage, the model goes together quite quickly.

Assembly. I always start with a kit of parts, so spend some time cutting out all the formers, fuselage sides and tail pieces. Make sure you glue in place the fuselage doublers ensuring you have a left and right side, and be certain to leave an 1/8 in ledge for the central crutch to locate. The central crutch is made from two sheets of 1/8 butt joined with a re-enforcing strip along its entire length. This could be made from a piece of 1/8 in foamboard, which would work equally well.

Glue in place the three formers that make up the fuselage sides and pair them up together, bringing in the central crutch. Once dry you can then add the upper farmers ready for sheeting. The top of the rear fuselage from the cockpit headrest back is made from 1/4 in sheet and then the remainder is sheeted with 1/8.

I built the nose using two round ring farmers, this makes it easier to form the very round curving shape of the nose and adds the strength. Then when you plane, carve and sand the nose, it soon shows the very characteristic shape..." 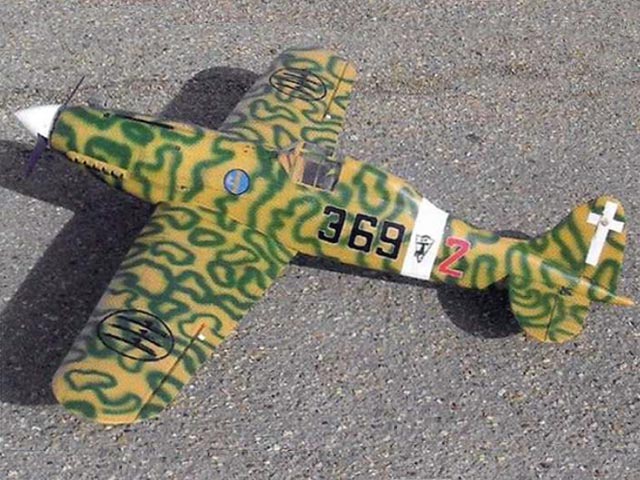