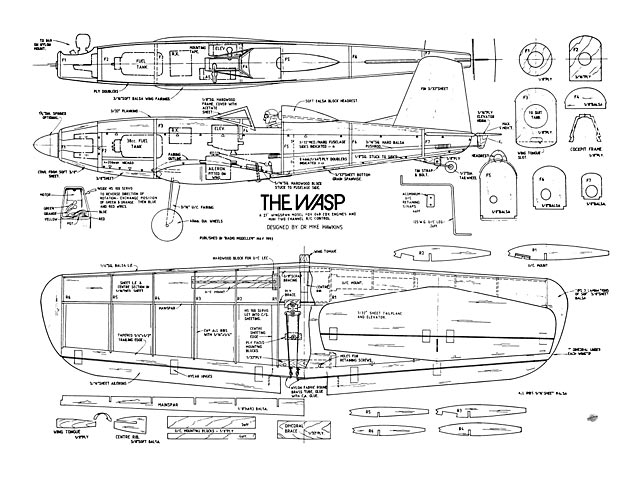 Quote: "The Wasp. A 28 in span .049-powered scalish two-channel low-winger, designed by Mike Hawkins. Get building!

There is something about small models. Apart from being quickly built and cheap, they have a fascination recognised by the un-formation (in-formation?) of the SMA!

Recently our club put on a model flying demonstration for an Open Day at the Royal Thai Air Force Base at Surat Thani. I took several models but, according to my wife who was standing with the crowd whilst we flew, the one that caught people's attention was my Sharkface (oz4416) with a Cox TD 049. Rolling as fast as a Fun Fly on rudder and elevator only and making a noise like a demented motor cycle it stimulated many questions of the Thai equivalent of: How much you buy it for Mister?

Now, way back in the '60s I made a low wing sports model which looked quite smart in pre-war US Navy colours. I have since made several versions from Cox 049 Black Widow to OS 120 FS. The Cox version was shown years ago in Straight and Level in RCM&E in Sept '82. It was my 58th radio model. The 40 version, the Hornet (oz9233) was published in Radio Modeller some 6 years back. After the success of the Sharkface (Thank you, Eric Clutton) I have made yet another version for TD 049, my 125th model, and in view of the noise it makes 'The Wasp' seems an appropriate name.

The model flies fast and is not really suitable for beginners but it is quickly built, and although it requires at least 15% nitro in the fuel, it does not use much of it.

Construction. Each wing half is built separately. Ribs slot onto the full depth spar, add leading and trailing edges and join the two halves with 1-1/4 in dihedral under each tip. The undercarriage mount is made up from 1/8th ply. When it is installed, check for no warps and sheet the leading edge and centre section with medium 1/16th sheet and add the cap strips.

Fuselage. 3/32nd medium hard sheet sides have 1/64 (0.4mm) ply doublers back to behind the wing. F2, which takes the motor mount, should be fuel proofed and the mount screwed on before building the fuselage. If the mount has a central hole for the fuel tubes, make sure that the engine is mounted far enough forward not to compress the tubes as they run round it..." 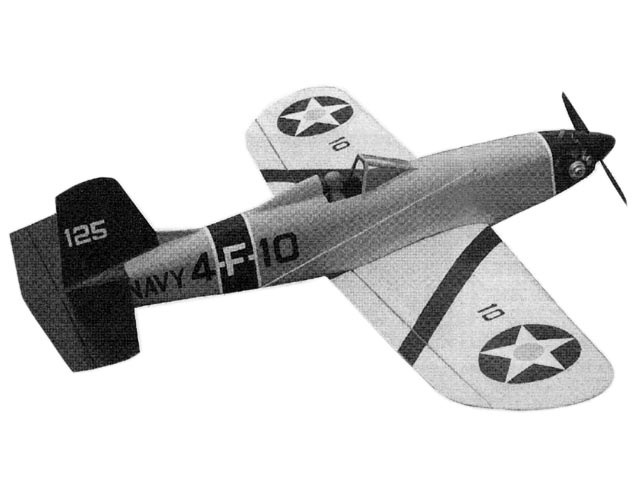