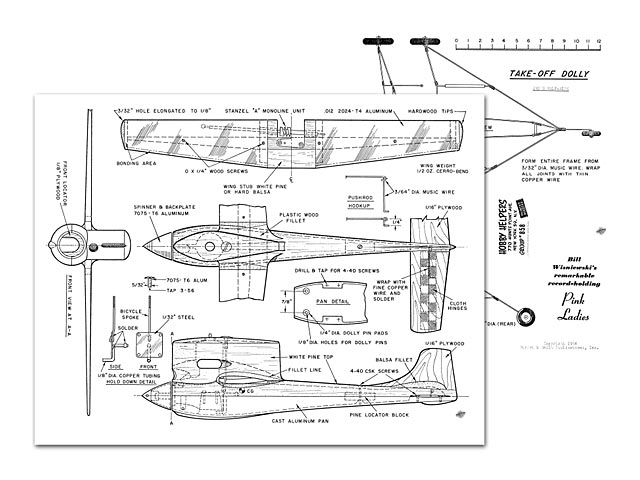 Quote: "The 'Pink Ladies' have quite a history. The class 'A' model detailed here has won every contest it has entered - with speeds varying from 138 to 154 mph. It has held the AMA record for class A since 1955. The first record was set at 141.40 that year at the Nationals held at Los Alamitos. This mark was upped to 145.10 during the California State Championships at Santa Ana in 1956. Shortly after the State Championships I went to the Nationals at Dallas and raised the record again.

Latest achievement was during the 1957 Nationals at Willow Grove, when the little beasts turned 154.58 mph. (An interesting note is that the 1956 record was broken three times at the 1957 Nationals by three different people, Nick Sher, Arnold Nelson, and myself.) I have used the same airplane since 1955 and it is still in good shape, picking up speed all the time. Pink Lady A has been clocked unofficially over 157 mph.

I don't know exactly what is making the airplane go as fast as it is, unless it is a combination of Mono-Line control, airplane design, and fuel. The engine is the same old Torpedo 19 that has been so successful in the past. Reworked just like the article in June, 1957 American Modeler. The fuel also is the same as in that article.

Mono-Line is one of the greatest advances in speed flying. The models seem to trim out better. The reduction in drag is quite evident. Speeds have gone up at least 10 mph in all classes because of the switch to Mono-Line.

Assuming you have mastered the Mono-Line control you must learn to get around the pylon. The best way to do this is through practice. Always fly from a pylon when testing your airplane and you will soon learn how to keep from stumbling.

You should also have a reliable takeoff system, either a dolly or hand launch. I prefer a dolly. A good one is sketched. The airplane should bind a little on the two prongs going into the pan. This will assure a take off without jumping the dolly.

Your helper or your mechanic is very important. Pick an interested modeler to help (not necessarily experienced as he can learn along with you). Learn to be familiar with the sound of a rich or lean mixture in a running engine. Reworked engines combined with hot fuels should be set rich on take off. Just how rich will have to be determined by trial and error..." 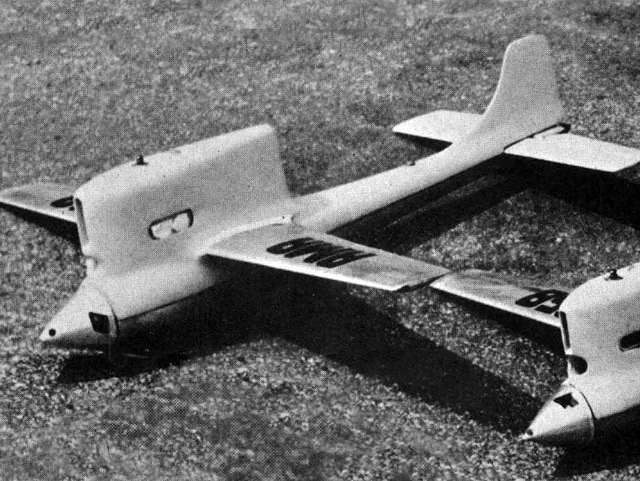