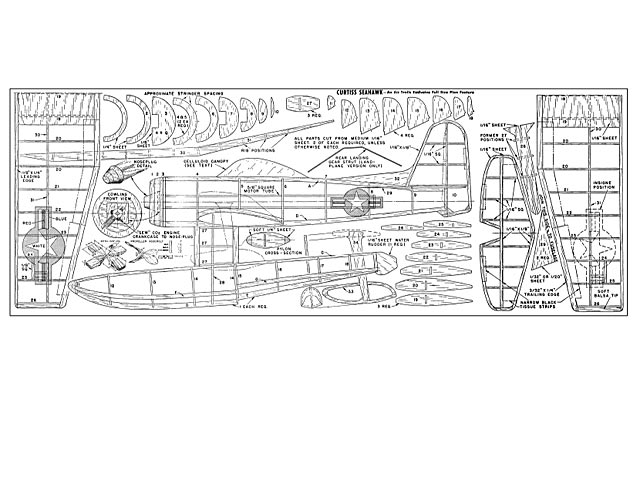 Standard scout for the US Navy, the Curtiss SC-2 Seahawk makes an unusual flying model. Our model of the Seahawk retains the strength of the prototype, which is stressed for catapult operation from battleships and cruisers. Built to spot gunfire, scout for enemy fleet units, and for search-rescue work, the Seahawk represents a recent idea - that of building a high-powered fast scout that wouldn't be a 'sitting duck' for enemy fighters.

Powered by the light Cyclone 9 engine of 1,200 horsepower this latest Hawk exceeds 300 miles per hour quite easily, and is one of the most versatile planes of the US Navy. Change-over to standard wheel landing gear within 6 hours enables the Seahawk to perform shore-based duties, and folding wings enable it to be stored compactly aboard ship.

Built to a scale of 1/2 in to 1 ft, our model permits use of Campus or Buzz CO2 engines, or rubber power. However, neither of these engines will permit a take-off from water, since no initial burst of power is available to break the surface tension of the water. So remember, if the seaplane version is your choice, stick to rubber power. The removable motor tube will enable you to change over from one form of power to the other within a few seconds.

The plans are full size, so if you have a few sheets of 1/16 stock and some 1/16 sq strips, we can start now. If you want to preserve the plans, use a sheet of light tracing paper over them. (The fuselage is built utilizing the half-shell idea, so it will stick to the surface worked on.)

The fuselage keel pieces A and B are cut out first, as are formers 3 to 10. Use medium 1/16 balsa sheet for all parts unless otherwise specified. The keel pieces are pinned to the side view plan and the formers cemented in place. Cement one 1/16 sq stringer in place (along the horizontal center line) and allow the cement ample time to dry. The left half of the fuselage is then removed from the work bench and the remaining half-formers added. The 1/16 sq side stringer is now added to the right side of the fuselage, care being exercised to see that line-up remains undistorted. The remaining stringers are added now, one on each side, so the fuselage won't tend to warp to one side.

The cowling is laminated from cross-grained discs of 1/4 in balsa sheet (formers 1 & 2) and sanded to shape roughly before attaching to fuselage. The motor tube is merely a box affair that encloses the rubber motor or CO2 tank. Use 1/16 sheet, making the tube 5/8 square and 11 in long. (We make it longer than needed and trim the rear end until the assembled model balances properly.) In the CO2 versions, mount the engine on a bulkhead as shown and place the tank as far back in the motor tube as you can to get the model to balance just forward of the spar.

The main float is no problem, being built in exactly the same manner. Remember to use fairly hard 1/16 sheet..."