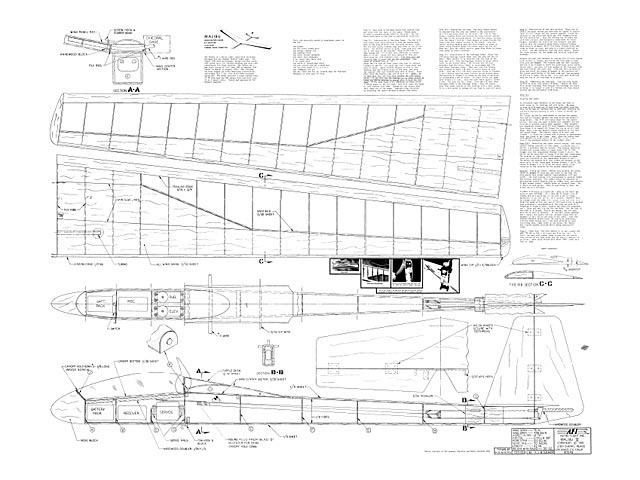 The airframe utilizes rugged all balsa Monocoque construction, and weighs only 2 lbs. with Kraft KP4B equipment installed. The model features a large tapered wing of 76 inch span and 460 square inch area with over 12 to 1 aspect ratio. Tested and approved by R/C Modeler magazine."

Gliders have always had a special place in my modeling heart, dating back to the early 1940s when as a fledgling hobbyist I built Thermic 18's, 20's and many Thermic 50's and 50X's. In the fifties while in college my roommate and I built a Jasco Floater which flew beautifully. We even flew the Floater at night with a small flashlight illuminating the inside of the fuselage. The fuse was covered with white doped silkspan and gave off an erie glow from the light. However the local gendarmes put a stop to that after the second night because alarmed neighbors were complaining about a white 'thing' flying around the park.

When an opportunity to do a Field and Bench on a glider came along, I grabbed it, because my old love was still there. MAN asked me to review Astro Flite's Malibu and the new Kraft KP-3B system with KP-12 servos. Malibu is a sleek looking glider having a wing span of 76 in, wing area 456 sq in, aspect ratio of 12 to 1, modified NACA 4412 airfoil, stab area 72 sq in, vertical tail area of 41 sq in, and a 42 in fuselage length.

Upon receipt of the kit my first order of business was to go over the plans. Two sheets are provided, one showing fuselage and empenage details, and theother two wing halves. A six page instruction book is also included providing construction and flying info. After reviewing plans and instructions, fuselage construction is started.

The third former from the front (c) should be positioned for servo mount spacing. Kraft KPS-9 and 10 spacing are shown on the plans. 1/4 x 3/8 servo mounting blocks provided should be glued to the third and fourth formers (C and D) at this time. Next the nose block is glued in place and 1/8 balsa sides are fastened using a clothes pin to clamp the tail together and weights or a C-clamp to close the forward end of the fuselage against the formers.

While the fuselage was drying, I glued the tail surfaces in place on the plan. Vertical fin is made from two 1/4 in thick pre-cut parts while the stab and elevator are 1/4 balsa pre-cut. Elevator and rudder must be tapered and sanded, stab and fin just need sanding.

Next 1/4 x 1/4 balsa push rods were assembled. I used .065" dia Oxy-weld #7 welding rod for push rod ends. This material is much easier to bend than music wire and is more than adequate strengthwise. A pound of weld rod costs $.40 and will probably last the average builder several years. The servo end of the push rod is left straight and tail ends are bent as shown on plan. Weld rod ends were assembled to the push rod by wrapping with 1/2A control line cord and then smearing with Titebond. After installing push rod plastic exit guides in the fuselage rear, push rods were installed. Top of the fuselage was then sheeted..." 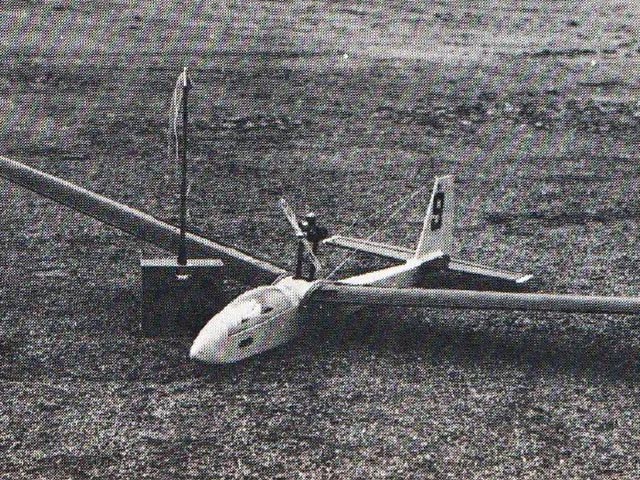 The Monterey (oz8705) was the evolution of the Malibu II, adopting a 100 in wing. Read the article of Monterey considering it's quite similar. R Boucher was the founder and owner of Astro Flight. You can read the interesting history of Astro Flight on Wikipedia.
Pit - 31/08/2018
Excellent, thanks Pit.
SteveWMD - 31/08/2018
Add a comment