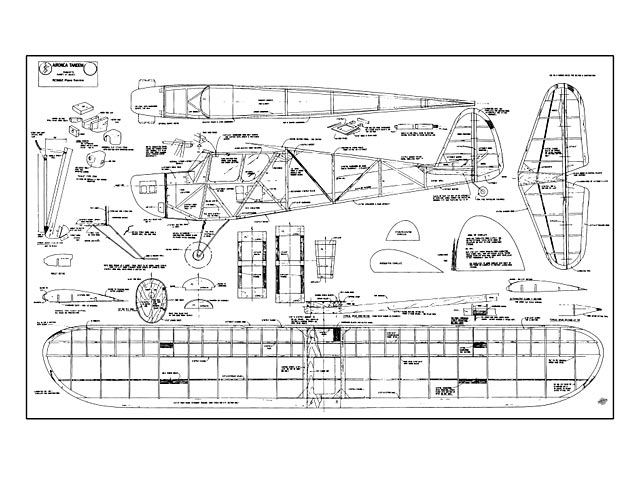 Harry's Aeronca Tandem is based on a vintage free flight model designed back in the 1940s. Subtle structural changes and the incorporation of R/C have turned it into a highly practical sports machine.

I suppose we must go back many years for the start of the Aeronca Tandem story, to the mid 1930s to be exact, when Aeronca laid down the specification for an enclosed tandem two seater to be designed around a basic 35/36ft wing.

Moving onto the 1942 American Nationals, there appeared in Class B free flight what we would now call a very 'stand off' scale model of the [Ronnie Albert] Aeronca Tandem (oz1657) of some 4ft wing span, but with an Ohlsson 23 up front! By the way, this was an entry in free flight duration, not scale, and weighed in at around 20ozs. With 4-1/2 in of dihedral it must have been a bomb to trim!

However, to move on through the years, I first came across the Tandem in the early 70s, when I obtained a reduced photocopy of the original design by a fellow called Ronnie Albert. This drawing went into my filing system with the intention of building a free flight model one day.

In 1987 I was in my vintage period. Out came the file with the Tandem in and with one small drawing, a calculator and an OS 20 doing nothing, the model presented here was born - or I should say, Ronnie Albert's model was reborn! A little 'better fed' than the original, it has grown up to sport a 60 inch (1524mm) wingspan. The rebirth was somewhat protracted, and the airframe was built in fits and starts, as work on other models allowed. The model was finally completed around early 1991, with the original motor replaced by an OS 26 FS.

I finally got around to a couple of test flights before arriving at one of the MPA Fly-Ins at Old Warden, where our editor was wandering around with his camera. Click, snap and pose was followed by the request - Can we have the drawings please? So here it is, but before we get into cutting and sanding, let's start with a few general comments.

The model is very much a stand off scale Sunday flier and while I have retained, as much as possible, the original structural appearance to try and appease the true blue vintage fanatics, certain changes have been made. The most noticeable is the reduction of the dihedral, which if retained would have been around 5.6ins (140mm). To prove this point, have you ever flown a radio assist Junior 60 with original dihedral - it's slightly touchy on the rudder, to say the least. The only other major changes are to the tail feathers, where a rudder post has been added and the stabiliser spar of the original has been increased to act as the hinge support member for the elevator.

On my prototype the wings have been made in two parts, with 12swg (2.5mm) wire joiners fitted into brass tubes, bound and epoxied to the front and rear spars. Also, the wing panels are bolted on, in place of rubber bands, but the plan shows both methods of fixing. Whilst on the subject of the wings, do not fly without the wing struts as these carry flight loads!

The plan shows both the original free flight sections, together with an alternative non-undercambered section which is easier to build as it requires no packing under the spar. This section may also be preferred by those modellers who wish to modify the plan by adding scale size ailerons. I suggest you use top hinges and only about 1/2 in dihedral per panel - ailerons have not been tried yet, so if you choose this route then you are on your own. For those who wish to produce a more scale like model, the appearance of the fuselage can be improved by adding a 1/4 in sq stringer just below the datum line, blending into the front 3/32 sheeting and tapering into the side, just under the stabiliser, at the rear. To complete the conversion a similar stringer should be run from the base of the fin and out over the cabin.

Another suggestion would be to extend the cabin glazing rearward and build a Grasshopper US Army observation version. This would require some slight revision to the side frame structure..." 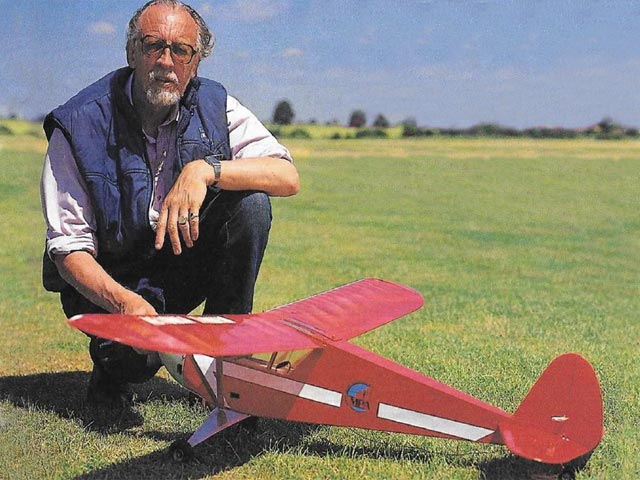