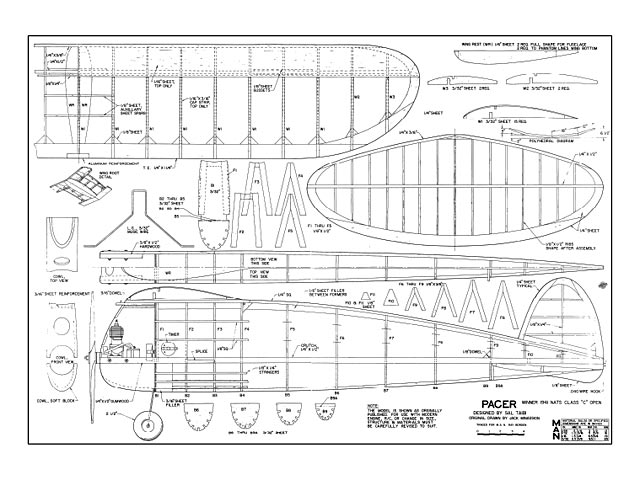 Quote: "A consistent class C winning gas model that is easy to build. The Nationals Winning Pacer, by Sal Taibi.

The Pacer placed first in the open class C event at the 1941 Nationals. On its first flight, with a 7 second motor run, it flew for 1 minute and 22 seconds. The duration of the second flight was 13 minutes and 55 seconds, and the third and final flight was 10 minutes and 5 seconds.

There are many factors that make up a championship flight, and although luck is an element, the model itself must get up there quickly and then glide well enough to take advantage of lurking thermals. The ship must be consistent, stable, and a dependable flier that performs well under all conditions. The Pacer has these necessary 'virtues' of a good airplane, and ever since the original was introduced in Model AIrplane News, it has met with widespread popularity.

Class C ships usually outsoar the smaller class A and class B models, but their drawback is comparatively poor climb. The class C Pacer compromises between the fast climb and poor glide of smaller ships, and the exceptional glide and poor climb of larger ships. The result is a fast climbing class C model that gets up to the thermals, and then has the ability to take advantage of them. The Pacer is powered by a motor having a displacement of .35 cubic inches. Because it has a wing area of 562 square inches, the model has to weigh 31.4 ounces ; it is simple, rugged in construction and flies easily.

Fuselage. The first step in building the fuselage is to draw the top view full size. An elaborate drawing is unnecessary; a center line with the width markings suffices. The formers and bulkheads are drawn full size on the plans and can be traced directly to balsa with carbon paper, or can, like the formers, be built on the plan.

The Pacer C is a later and larger version of the Pacer B (oz8073) which is already on OZ. 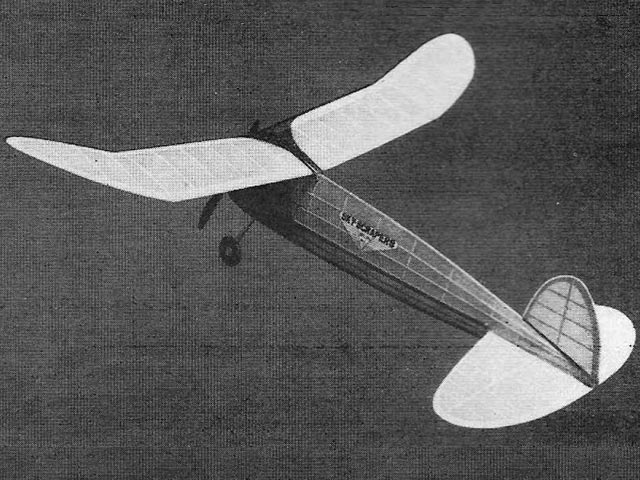