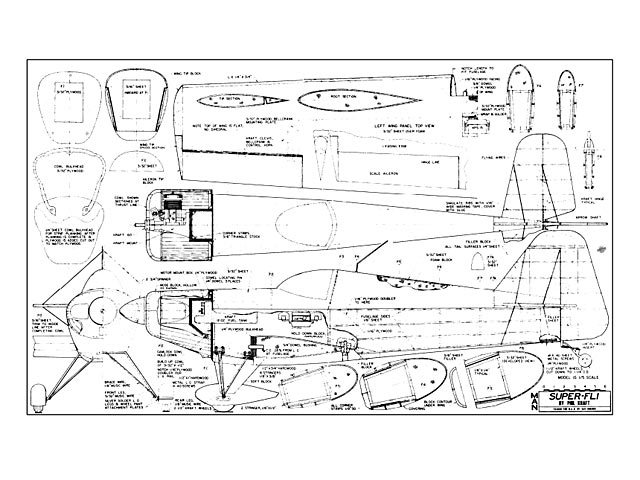 Dan Lutz built the scale Super Fli and is a modeler from the old school. Dan is equally adept at Peanut Scale, Free Flight or Radio Control and is also a meticulous restorer of old cars. It is not surprising therefore that his model of the Super Fli is truly beautiful, and except for the lack of a pilot's head, it is difficult, if not impossible, to distinguish from the large Super Fli in the air.

Flying the model Super Fli is an exhilarating and refreshing change from boring Pattern airplanes. In my over 20 years of flying Radio Control, I have never flown another R/C model that I enjoyed as much. The R/C Super Fli is a snap-rolling fool. It is the first model with which I have been able to do successful Lomcevacs over and over. Lomcevac is an outside snap roll entered from an upward line which terminates in an end-over-end tumble. It's a very violent looking maneuver, but actually isn't at all hard on the pilot because once the aircraft snaps, the G-forces are unloaded, and it is then an easy end-over-end tumble. With the model Super Fli a Lomcevac can be entered either from a 45° upright climb or from the same angle inverted. With plenty of power and speed, it can be made to tumble twice which is quite a spectacular maneuver.

While the model Super Fli is primarily great at the type of spectacular maneuvers displayed at air shows, it is also capable of precision flying. I don't mean to imply that you should attempt to compete on an equal basis with an FAI contest airplane in the FAI Pattern, but you could certainly do the Pattern well, and it would be a lot more fun. Although the all-up weight of the model is over 9 lbs, the Kraft .61 has no difficulty in pulling it through all maneuvers. So far I have done no experimenting with props, but the 13.6 used seems to do an outstanding job.

To date, the model has only been flown from our dirt field, and, therefore, I can't comment on the ground handling. It is excellent, however, on dirt. It seems to inherit the good directional stability of its big brother. Of course, it's not a beginner's model because the landing gear tread is quite narrow, and it can be a handful in crosswind landings. Also, in flying, things happen very quickly with this type of aircraft, so reasonable caution should be exercised during the initial test flight.

Dan Lutz designed the paint scheme, and I think that it is largely responsible for the pleasing appearance of the Super Fli. Dan has written some notes regarding his construction of the Super Fli, so if you want to build a scale model that puts flying fun back in R /C, read on.

Construction. The fuselage is a basic-box type of assembly with stringers added over the sheet balsa sides and stringers on the bottom. The fuselage sides should be medium weight, straight-grained 1/8 sheet as well matched as you can find. Use 1/16 plywood doublers as shown in the side view... " 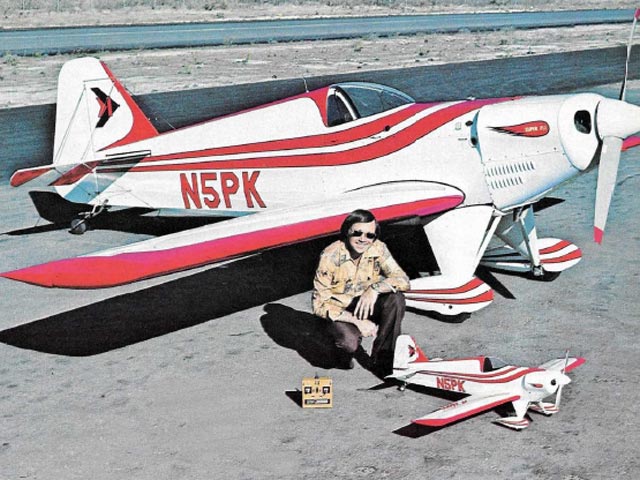 The Kraft Super-Fli is one of my all time favorite aerobatic aircraft. Its clean, simple, elegant lines convey one purpose, and one purpose only - aerobatics! Besides, it's just a great looking aircraft. Designed by Phil Kraft, World Champion pattern flier and R/C model aircraft designer, the Super-Fli is the culmination of a model designer's dream to design a full scale competition aerobatic aircraft. Covered with Ultracote, its just about ready to go [more pics 006-009]. For a detailed build article go to http://tslidehaven.com/superfli%20build.htm
JohnnyB - 26/10/2018
Add a comment