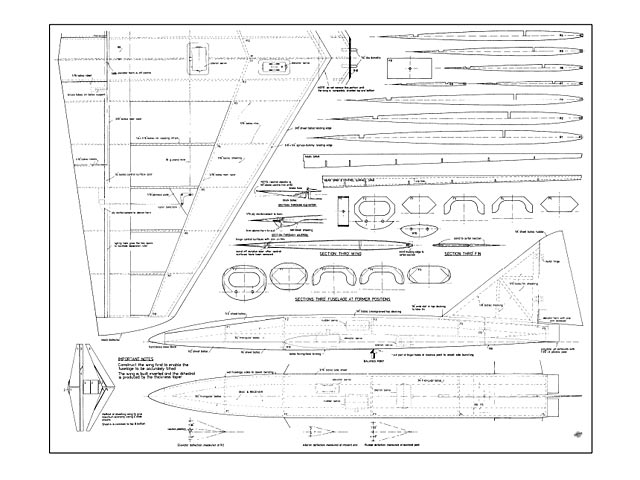 Later kitted by Trew Flight (and supplied by Ripmax in the UK).

Quote: "Design parameters of a not-too-orthodox but highly aerobatic soarer has been met with the Delta configuration for our unusual but neat sailplane that can be fun or businesslike for contesting! The Delta Lady, by Mike Trew.

After taking the natural progression from a trainer type soarer up to a highly aerobatic soarer I looked around for something new to build and fly. I desired a model that was different and original but not too unorthodox such as a canard or 'tail first' design. I struck on the delta type planform as it had the obvious advantage of low wing loading, sleek drag-free lines, and plenty of room to stow away the radio equipment.

I tried to find a suitable design but there was very little available and those that were had only been developments from free flight models. Therefore, I decided to design my own. I gave considerable thought to designing a layout that was as efficient as possible yet not too complicated to make the construction lengthy and tiresome. Right from the outset I discarded the use of elevons as they are a compromise giving too much pitch effect but not enough roll, and if mechanical linkage is used there is invariably too much linkage slop.

The trailing edge was raked forward to give a straight hinge line, giving a large area of elevator which only has to move through a small amount to give the required degree of effect. This had the effect of considerably reducing surface drag. The ailerons are placed outboard where their effect is greatest. The wing section is fully symmetrical SI .03006 and the reflex is incorporated by deflecting the elevator upwards. It may be a temptation to raise the aileron also to obtain a constant line through the trailing edge but this is inadvisable as the inverted flight characteristics will suffer.

A low wing design was chosen to make it look more scalish and the fuselage nacelle is bolted on to the top of the wing. The large fin was used to obtain good directional stability and a generous rudder surface is incorporated to give a good stall turn effect..."

Here we have a sleek delta-winged slope soarer which promises high speed, full aerobatic potential, a wide speed range, and rapid construction. The large kit box contains all you need to get flying, bar the usual details such as radio, covering material and adhesives. The model is based on a pair of obechi-skinned foam wing panels and a GRP fuselage shell, with relatively few other components. As the instructions are fully detailed and the model is not designed for beginners in any case, l will not dwell on the sequence of construction, However, there are a few points worth mentioning before we get to the crux of the matter - how it flies.

Construction: The bare wing panels weighed 7-1/2 oz each as furnished, and the builder is advised to cut a pattern of holes in each panel to reduce the weight. it was a bit nerve-racking to hack at a new pair of wings in this way, but the method recommended worked quite well. I used a new Junior Hacksaw blade, with one end snipped oft and this coped very easily, producing a smooth cut on the foam and not too many splinters in the veneer. Work from the top, so that any splinters appear on the undersurface! The blocks removed from the two wings weighed 4-1/2 oz, so this is certainly a worthwhile exercise.

The fuselage, made of white pigmented polyester resin and chopped strand mat, weighed in at 8 oz and was of good quality. The inevitable seam along the top was unobtrusive, and I would have been happy to leave the body unpainted, if I had not had a tin of evil blue/green paint at hand.

No problems arose with the fuselage until it came to fitting the wing to it. Alas, the contour of the wing seat was very different from that of the wing top surface, and with the wing touching the seat at the maximum thickness point, there was a gap of 1/8 in at the leading edge and 1/8 in at the trailing edge. However, the wing seat has a wide flange, and it was a simple job - if an unwelcome one - to fill the gaps.

The rudder features a particularly neat, concealed torque rod method of actuation - very nice. In fact, the radio installation was generally well thought out and straight-forward, although I could not find room in the servo bay for the aileron servo linkage supplied - a minor point. I was not at all keen on having to cut into the wings to fit the aileron snakes though, could they not have been incorporated before the veneer was applied, as in many other kits? The bushes supplied for the elevator torque rod were paper drinking straws, and I could not bring myself to use them, since they were of very thin material and far too large in diameter.

In spite of these problems, construction proceeded at a rapid pace, and just eighteen hours after I started, the model was up to the covering stage, with the radio installation complete. I opted for nylon covering, and this final stage, including the paint and tisue trimming..." 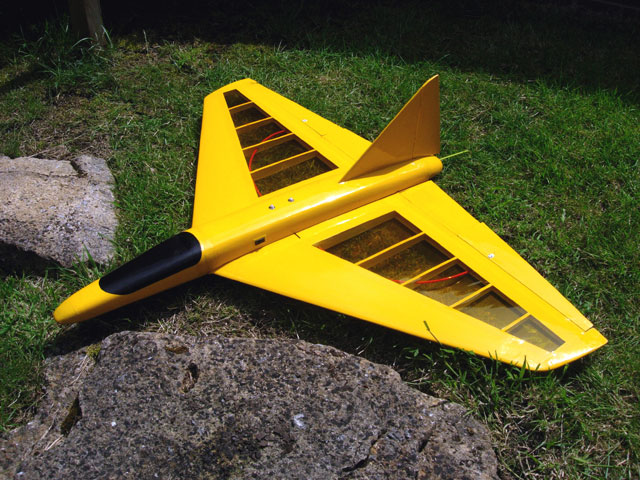