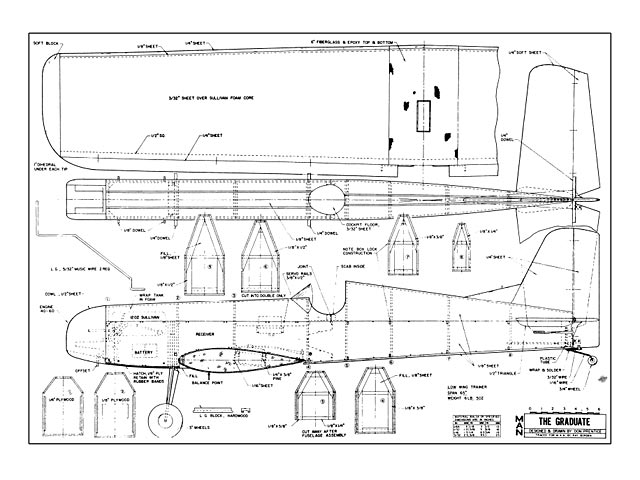 This model is the second in a series of two, the first designed for the beginner and this for the novice, in radio controlled flying. The first, a trainer called the Tutor (oz9767) appeared in MAN in June 1975. This model, the Graduate, is for the modeler who has graduated from the Tutor or similar type aircraft and who now wishes to proceed to a low wing design.

With this in mind, every effort has been made to reduce the complexity of the model. The foam wing is a Sullivan PDQ core which makes the construction of the wing a piece of cake. The tail assembly is 1/4 in balsa sheet and the fuselage is made up of flat sections of balsa sheet. Planking and the carving of blocks have been eliminated, and still, a model that looks like a full size aircraft has resulted. To further eliminate the construction problems, the undercart is not in the wing but is plugged into the bottom of the fuselage. Its torque rod construction makes it very forgiving. The engine is mounted in a metal mount which provides a lot of room for the tank and batteries. The all-up weight of the prototype is 6 lb 4 oz.

The model is a tail dragger, which, on the surface, may be considered difficult to get off the ground, to taxi, or to land. This is not so, as considerable effort has gone into the design of the tail wheel assembly. This, provided the main gear is at the leading edge of the wing, is the key to good ground handling. Pay close attention to the tail wheel design. It is soft and springy, which permits the wheel to go into and out of holes in the ground without causing the tail of the model to bounce in the air. The location of the wheel behind the rudder, is also a must. With this set up the wheel stays on the ground, and the model becomes easy to handle in a cross wind.

On take-off, hold full-up elevator for about 5 or 6 feet then let up. The model will go when it is ready and unlike a trike gear design, there is no force putting weight on a nose wheel which often prevents a take off due to nose wheel drag. Should the grass tend to trip the model, a slight amount of up corrects the problem. A little right rudder may also be required on take off but is not always necessary with this model as the fuselage is fairly long.

The model is docile in flight when the controls are limited in movement, but can be fairly active in the hands of an expert. The prototype will not spin due to the size of the rudder and the recommended posi-tion of the CG. The Sullivan wing shows no sign of tip stall at low speeds. If you are ready for a low winger, and like to scratch build, get a foam core from Sul-livan and follow the instructions below.

Wing. The Sullivan core requires the use of TE ailerons. Use 1/4 in x 1 in trailing edge material. Cover the wing with medium 1/16 sheet which must be glued together to obtain the wing planform size before installing. This is easily done by fitting sheets together by selection or by using a sanding block to lower the high spots..." 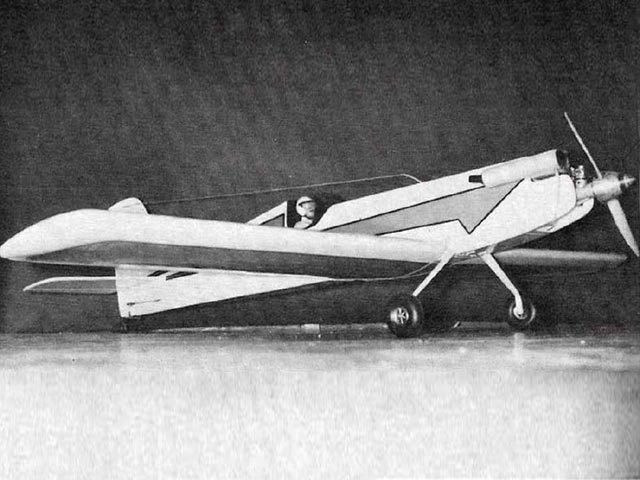