The Lacey M10 and Wittman Tailwind (oz1039) designs appeared together in the same article in Aeromodeller Dec 1976.

JOE LACEY never realised what an aeromodeller's aircraft he was build-ing when he made his M.10 in the middle '60s. Nice simple lines, large tailplane, simple construction, in fact a beginner's scale mode some people have called it. Other people have named it an 'Ajax', but whatever it's called it flies superbly (yes, even though there's no dihedral) and I have yet to see a Lacey that does not fly superbly.

The model as drawn is full scale, including construction, and consequently it scores high static marks under the present Peanut Rules, and this coupled with its flying ability makes the Lacey a hard aeroplane to beat.

Construction is simple, but as with all small scale flying models, lightness coupled to strength is the key factor for ultimate performance. Select wood which is light yet strong; there is still plenty available in model shops, but careful selection is necessary to avoid an overweight model.

The Lacey's finished weight should be under 1/2 ounce, and with the suggested rubber and propeller sizes a model capable of very long flights will result. Begin building the fuselage by making two sides, one on top of the other. When dry, separate and form a box section by adding the cross braces. Add the 3/32 x 1/8 sheet nose section together with the ply nose former. Next cement in the undercarriage cross brace mounting and epoxy the U/C wire in position. The tailwheel and cabin support struts can now be added.

Tailplane and fin are built over the plan using 1/20 sq balsa or light 1/16 gently sanded. The hinges are cut from thin aluminium or beer can tops, these are pointed and pressed into the tailplane and very lightly epoxied. After covering, the elevators are then pressed onto the epoxied points of the hinges. The fin is built in exactly the same way but do not forget to add the little gussets - as well as adding strength, these help to keep warps to a minimum.

The wing is then built over the plan after first slicing off the top cambered section (using a template) ribs from sanded, soft, quarter grain balsa so that the eventual top ribs are approxi-mately 1/20in. square. This method of construction gives a very good strength to weight ratio and is extremely stiff when covered..." 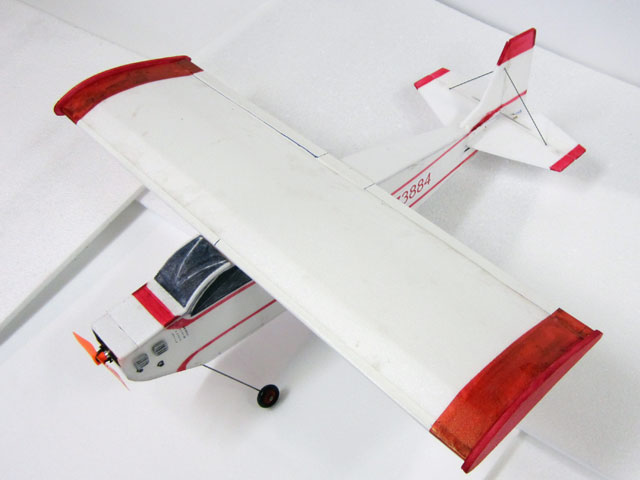