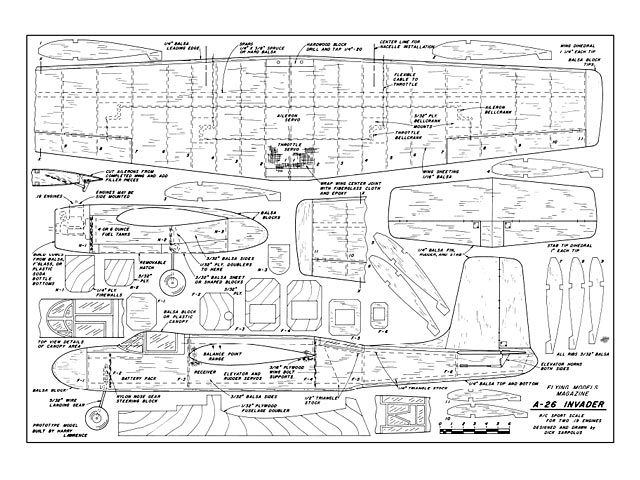 The B-26 Marauder was made by Martin and the A-26 Invader was made by Douglas; both were designed and produced for use in World War II. Around 1947, with the B-26 Marauders scrapped, the Invader was redesignated as a B-26. They later saw a lot of use in Korea, and the French Air Force used the Invader in their Indochina and Algerian actions. By the early 1960's most of the Air Force B-26's were out of service, mothballed in Arizona. A few years later, Invaders were pulled from storage, rebuilt with strength-ened wings and other modifications, and again designated as the A-26, this time for use in Vietnam. By 1970, the Invader's fighting career was over and they were headed for the scrap pile.

Their long military career has made the A-26 Invader a popular and easily recognized aircraft. For modeling purposes, its proportions are nearly ideal to provide a good flying WC aircraft. I would be reluctant to model the B-26 Marauder, although it has been done. Its tapered wing with not too much area looks tricky, and the round fuselage would require more complex construction techniques. This A-26 model is stand-pretty-far-off scale; my primary aim was to get an easy flying twin erigined model, easy to build, with a reasonably scale appearance.

The project started out to be a DeHavilland Mosquito; my good friend Harry Lawrence had two OS .19's he wanted to use in a twin engined model, and he preferred the Mosquito. I tried to convince him that the Mosquito's mid-wing configuration and round fuselage weren't suited for a quick-build project, and the result was our A-26 Invader.

As a scale reference source, I used the Squadron/Signal publication, A-26 Invader in Action. This book provided a good 3-view drawing along with many, many photographs of all the A-26 details and design variations. After I had completed the construction plans, Harry built the prototype model, doing a beautiful job on it. With it prepped for painting, we selected an unusual Navy yellow and blue color scheme to be different. The Navy used a few A-26 aircraft, designated the JD-1, as a target tug. This article could have been titled the JD-1, but who ever heard of a JD-1.

I painted the model, and with some panel line details inked on, we were pleased with what we thought was a unique scale project. Then Bob Hunt, FM's editor, told us that an A-26 also in the Navy color scheme had appeared on an FM cover about twenty years ago - see Bob Doell's Douglas JD-1 (oz1275) - so much for our unique aircraft. With so many A-26 variations having been produced, and with it having been used by so many foreign air forces, there are plenty of scale versions and paint schemes to choose from.

In laying out the model design, the biggest intentional deviation from scale was an increase in the wing chord, to get more wing area while still trying to keep the overall ap-pearance close to scale. I was concerned about the power available from two tired old OS .19s, so wanted to keep the model to a reasonable size for the engines. The result was a wingspan of 54 inches and a fuselage length of 42 inches. The wing area is 480 square inches, and a semi-symmetrical airfoil is used for good lift and flight characteristics. The root airfoil is 17% thick and the tip is 18% thick; the result is that this wing doesn't want to stall. Horizontal stabilizer area is 19% of the wing area, maybe a little small but okay. The vertical fin area is about 11% of the wing area, more than enough for stability. I wanted plenty of vertical fin area for safe single engine flight operation.

Construction is conventional and straight-forward. The fuselage is a basic box, with tri-angle stock in the corners to permit rounding to shape. Tail surfaces are sheet balsa. Engine nacelles are box construction with shaped blocks where needed. Engine cowlings are made from the plastic bottoms on large soda bottles; their diameters were reduced by cutting and overlapping to get the right size. The paint used, butyrate dope, didn't stick too well to the plastic cowls but they're sure low cost and easy to use. Rather than try to vacuum form a clear plastic can-opy, the canopy area was shaped from balsa blocks and airbrushed to simulate the win-dow areas.

The wings are conventional with top and bottom spars and are completely sheeted with 1/16 inch balsa. A built-up wing was used rather than foam as we felt it would be easier to install the aileron bellcranks and throttle linkages in the built-up structure..." 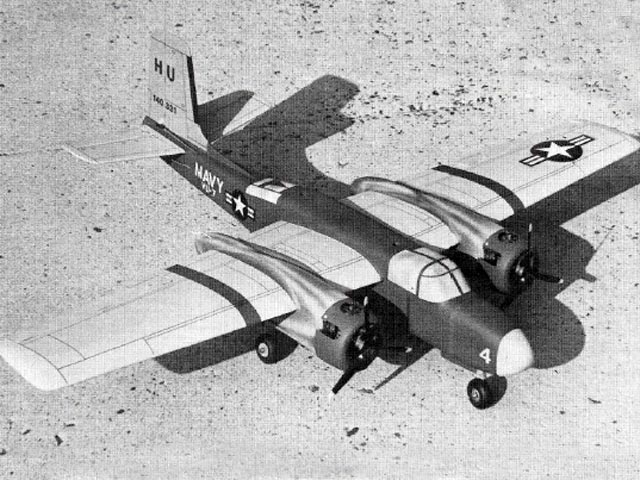