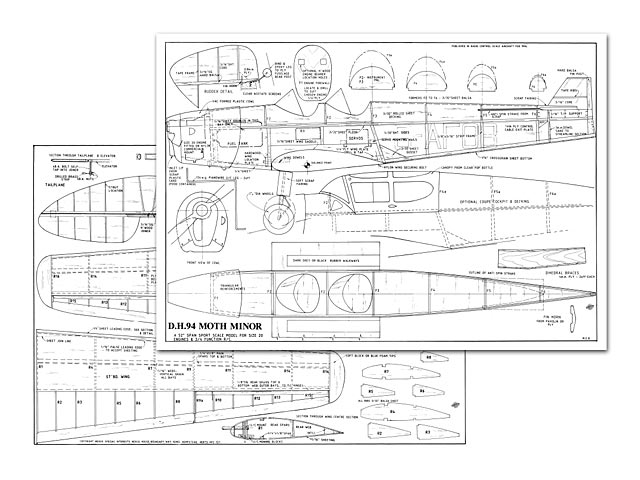 As early as 1929 the de Havilland company realised that there was a large potential market at the lower end of the flying scene which could bring the reality of practical flying to an even wider public than the existing 'Moth' aircraft or the proposed type 82 (to become the renowned Tiger Moth) would fulfil. Therefore, a new, inexpensive and simple design was initiated which emerged as the DH81 Swallow Moth, a two seater, open cockpit, all-wood cantilever monoplane with low wings thus dispensing with the high costs associated with complex rigging of biplane types. However the success of the existing Moth programs demanded total commitment of all the available production resources requiring the new project to be temporarily shelved.

Five years later the design was resurrected and moved to a dedicated production facility where in revised form it was to be built as the Type 94 Moth Minor. Power was by 90 BHP Gypsy Major engine and the airframe construction was based on the well proven spruce and ply methods.

This attractive little monoplane has not been too frequently modelled although there have been several classics built notably that of the late Terry Melleney which Terry campaigned for several seasons and with honour at three World Championships.

This little model is no World Championships contender: more a simple, low cost and compact flyer which built lightly with careful choice of materials will perform in a most satisfying manner. There are variations possible on the simple open 'two-holer' white and blue finished concept which most people associate with the Minor in the form of a coupe version or a camouflage scheme. We hasten to point out that the coupe version has not been built but should not exhibit any significant differences to the open version in flying performance.

Wing construction. The wings are of classic D-box construction which happily reproduces the ply and fabric construction of the original. They do not fold, although apart from added weight of suitable hinges and fixtures, there is no reason why they should not, it just seems a little bit over the top to try anything so complex on such a simple little model. The centre section is flat and includes a laminated Liteply undercarriage spar. Chose either hard 3 mm balsa or Liteply for the CS ribs, they have to support the U/C.

Assemble the ribs, spars, false leading edge and U/C spar over the plan angling the outer ribs to the dihedral template and whilst it is still pinned down, cut away the outer ribs to fit the dihedral braces. Glue these into place and then sheet the top surface with soft 1.5 mm sheet. This can be well sanded down after assembly is complete..." 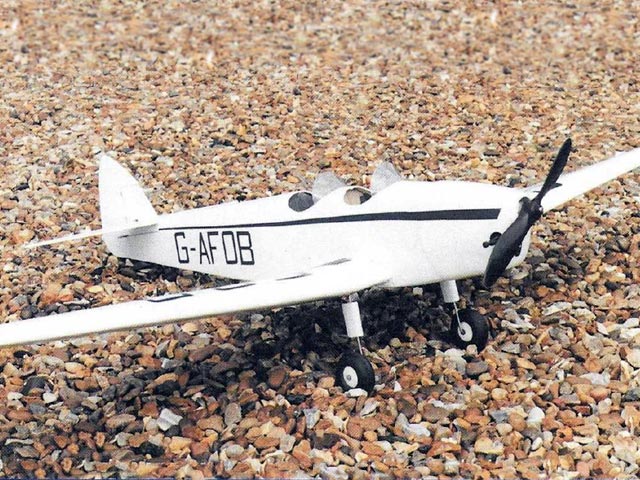