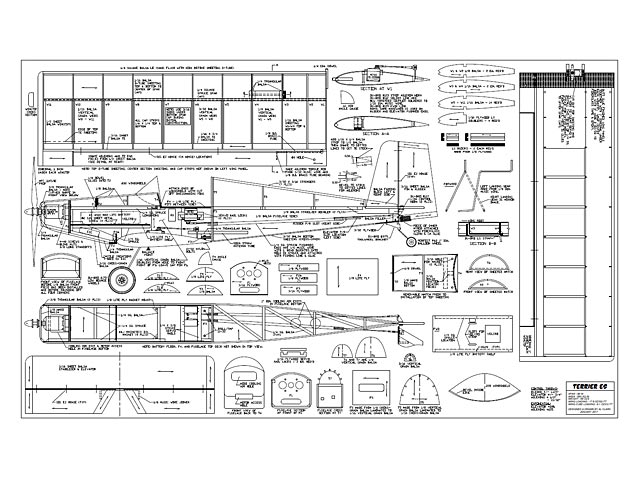 This plan is a free download available from the Model Aviation site at http://www.modelaviation.com/terrier-es where it appears along with the full build text, a detailed materials list, and some great build pics.

Quote: "The Terrier ES is a redesign of the glow-powered RCM Terrier (oz6559) model I designed in 1982. The original model was the size of most .40 glow-powered airplanes, but it was lightweight and powered by an O.S. .25 engine. It proved to be an excellent performer. The Terrier was published in Radio Control Modeler magazine in March 1984, and the plans were a best-seller.

At the time, I received many letters and photos from modelers in the US and abroad. I recently discovered that the original Terrier plans have made their way onto the Outerzone Plans website and was pleased to find encouraging comments from modelers who are still building and flying it.

Having designed more than 50 RC models throughout the last 45 years, I can honestly say that the Terrier was the best all-around sport model I ever designed. The new electric-powered Terrier ES (ES for electric sport) is even better!

I have built and flown many glow-powered models, but these days, my glow-powered aircraft have been replaced with electric-powered ones. As have many other modelers, I have been won over by the convenience, low noise, and reliability - and the best part is not having to clean the oil off of an airplane after a flying session!

In the past 15 years, I have often thought that an electric-powered Terrier would make a great model, but other projects had priority. After a recent discussion and some encouragement from my brother, Rod, I finally created CAD plans for the Terrier ES.

The Terrier ES’s fuselage was redesigned to accommodate the electric motor, ESC, and LiPo battery pack. This resulted in a change in the firewall location; the addition of a battery mounting shelf; adding a removable hatch on top of the fuselage for battery access; adding air-cooling intake and exit holes in the firewall and fuselage; and a different location for the rudder and elevator servos. Not having an upright-mounted glow engine and muffler meant that I could close off the front of the fuselage and essentially make it into a full cowling for a more scalelike appearance.

The Terrier ES retains the aerodynamics and overall configuration of the original model. I did not want to make any changes that would upset its excellent flying characteristics. The motor thrustline, wing, and tail are all set at 0°, which helps ensure that its inverted flying characteristics are similar to upright flight.

As did the original, the Terrier ES uses a modified NACA 2415 airfoil, which is the primary reason for its excellent performance. The modified airfoil reduced the leading edge (LE) radius by 40% then recontour the first 15% of the top and bottom surfaces. This modification resulted in providing cleaner snap rolls and spins. Entries are relaxed and the maneuvers are easily stopped when the transmitter sticks are released.

Even with this modification, the airfoil still exhibits outstanding low-speed stall characteristics. This airfoil has a smooth lift-to-drag curve, which provides predictable handling. Combining the modified NACA 2415 airfoil with a relatively high aspect ratio 6:1 wing results in excellent climb and glide performance. Only a little down-elevator is required to fly inverted, and outside maneuvers are easily accomplished..." 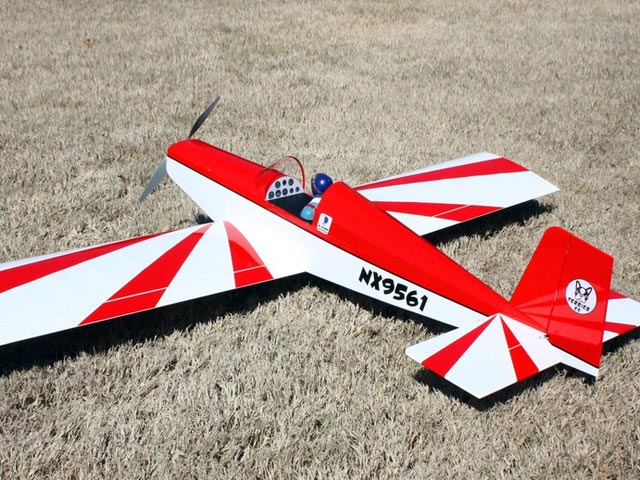