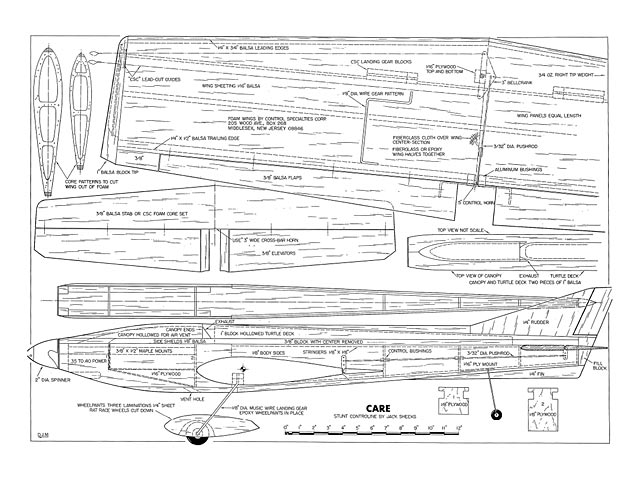 Quote: "A very capable stunt machine for .35 engines. Durable and able for practice or active competition. Care, by Jack Sheeks.

With the name 'Care' on the wing of a fine little stunter like this you can imagine the many different and varied remarks I receive. So with each and every differcnt comment or giggle from the gallery, I try and think up a different meaning for the word "Care". Such as 'Coranaries Are Real Exasperating' or 'Combat Aircraft Rarely Escape'. Sometimes I tell them that it is named after the many Care packages received from modeling friends over the years, but what it really stands for is a small tribute to the many people who cared enough while I was ill to let me know they were rooting for me. And that's what this world is all about isn't it? Caring?

Enough of that mushy stuff. What you want to know is does it fly, and does it fly well. You might want to know if it is worth modeling. Well, up to this point in time the craft hasn't been in competition, but I feel it will certainly hold its own. It grooves very well and turns a crisp corner and with these two aspects all that is left is to trim it to fly your way.

The little ship was originally designed around an engine and a wing set. To clarify this we have to turn time back to the '76 Nuts at Dayton where I observed some of the finest running OS .35's I have ever seen. Some of them were Adamission .35's and the rest were engines by Mother. For those of you who haven't had the opportunity of meeting this gentleman his name is Rene Mechin, but to his friends he is known as Mother. Anyhow these engines stuck in my mind and over the long winter months the phone conversations get longer and longer. During one of our many bull sessions with a very good friend and excellent modeler, I asked Bill Eybers if since he knows Mother better than I, would he put in a good word with him, and see if he would build me one of his super 35's. You see he isn't in the engine business. In fact I think I begged.

I had decided on a. .35 size ship as the .46 engined birds are getting so huge that after two visits to the field in my Chevy trunk it makes you think the model went through the Star Wars. Of course most don't think I'm the most gentle soul with models as it is, but then I'm no brain surgeon either. Anyway Bill must have talked real sweet as Rene did a fantastic job on my engine.

In the meantime during, a conversation with Hobby #1 Hunt it was decided that the new bird had to have one of his super-duper A#1 Master Flite wing sets with the stab and elevators to match. Well, when this wing set arrived, the only thing it lacked was an elf to put the halves together and hinge the flaps and elevators. If I could talk Bob into doing this also, we would he known as 'gentlemen of leisure' builders. Actually it is a very fine set of wings that is quite complete including the flaps already finished, landing gear blocks with removable covers and leadout guides. The stab and elevators were very well done also. This was really great for me as I am not in love with building flaps, stabs and elevators. The're worth looking into.

Anyway I drew a bunch of sketches, swiping anything that would be useful, before settling on what you see here. As you have noticed by now there is a slit or opening just behind the cockpit. This is one of my great deductions of 1964, pertaining to engine runs. Have you ever had a .35 that ran great until the last quarter of the pattern and then turn on like gang busters..." 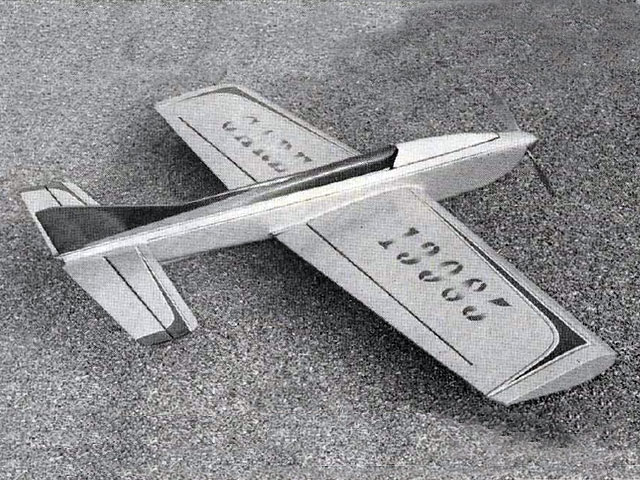