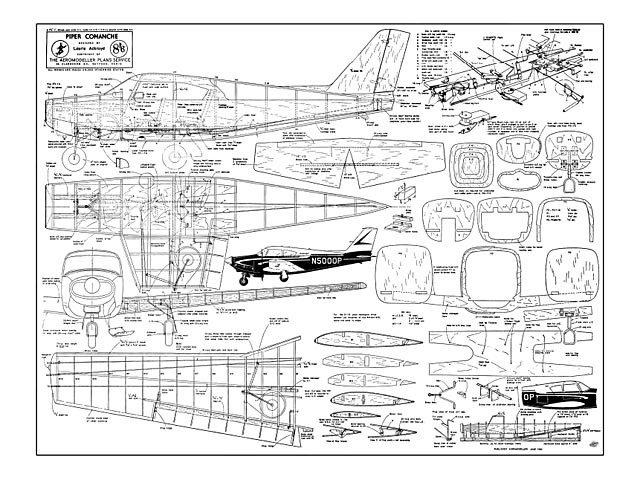 SELECTION OF THE Piper Comanche as a detailed C/L scale project was inspired by the publication of photographs of the prototype about the same time as a report in Aeromodeller on the J Roberts Flight Control system. At that time Laurie's Fokker F.VIIb.3m Southern Cross, APS plan CL688 model, (7s. 6d. plus 6d. post), exhausted its share of success's at National and provincial meetings and had become, like the original, fuel-soaked and vibration-racked.

Construction of a replacement model was due and while a tricycle undercarriage type offered something of a challenge, the way was made clear with Flight Control and some assistance in this direction was given by designer Bob Smurthwaite himself, who fitted a Veco .19 motor with Varispeed slide throttle.

Throttle, flap and u/c control. The obvious construction with a model fitted with working gear for the motor speed, undercarriage and flaps with all their attendant rods, levers, cams and linkages was to have this equipment mounted on a rigid keel of plywood so that operation would not be affected by the stresses to which the model may be subjected. Accordingly, it was designed to utilise the cabin floor as a horizontal keel of 3/16 ply, on to which ply formers lock and the mechanism is mounted on the underside of this keel.

This model, spanning 45 in, represents all Laurie Ackroyd's model building activity over the past two years, interrupted only by a couple of C/L stunters and an FAI power model. The greatest portion of time went into the design, experiment and installation of the clockwork-operated retracting and extending under-carriage, flaps, rudder and motor speed controls. Although the photo shows a mass of rods and levers which appear overcomplicated and hard to follow, the result is a self-locking undercarriage which works beautifully. The interconnected motor-speed, flaps and rudder (offset at slow speed) are relatively simple; but it all adds to the seeming jumble of linkages which are housed in a depth of less than once inch beneath the plywood floor of the cabin. Thus the interior is not encumbered by gear which would detract from scale effect. For the modeller who prefers to "simplify", detail is provided for fixed gear.

Plywood and balsa are combined in the basic airframe which was built on a simple jig to ensure alignment and accuracy to scale was maintained through the use of 1/2 in to 1 in factory blueprints, brochures, cutaway drawings and photos provided by the Piper Corporation for the 45 in model. Having tried aluminium foil on a previous model with disappointing results Laurie used paper-backed aluminium successfully on the Comanche. It is applied in strips up to 4 in. width using a thinned-down solution of white Bostick contact glue on both surfaces.

The first step in construction is to make the fuselage assembly jig, which is quite a simple affair of pine or similar semi-hard wood. The keel and ply formers are fretsawn, using bonded plywood of good quality and even texture. Formers are checked for correct alignment on the keel before assembling them with motor mounts in place on the jig. A slow-drying cement such as PVA is required for all the joints except balsa-to-balsa, and even here it is found advantageous to use PVA for sheet covering particularly. The balsa formers are cemented in place on the 1/8 sheet fuselage undersurface which is pinned to the sloping portion of the jig, then the fuselage basic sides are added, the nose portion being slit to allow it to follow the contour of formers F1 and F2..." 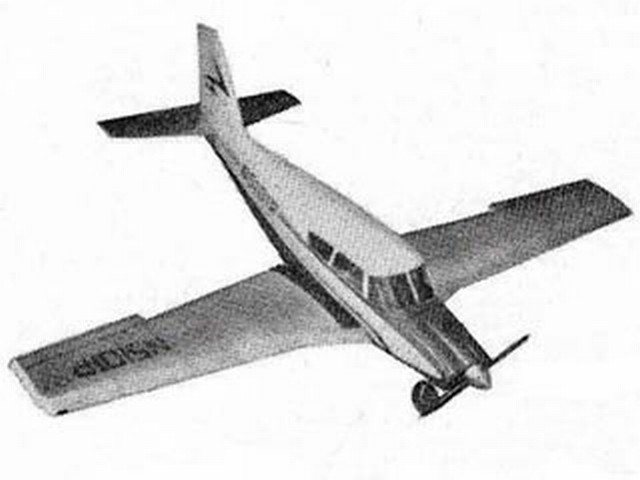 Hi Mary - a slight slip of the finger when entering the date. It was June 1961, not 1971. I remember drooling over the plan on the school bus when we lived in Yorkshire and that issue of Aeromodeller had just come out.
ChrisPinn - 15/08/2018
Thanks Chris - amended just now :) We love our eagle-eyed readers!
Mary - 15/08/2018
Hello, Great to find this article and read your comments. Laurie Ackroyd was my father and I still have the original model, carefully displayed and admired by all who see it. Murray Ackroyd, Timaru, New Zealand.
Murray Ackroyd - 20/08/2019
Add a comment