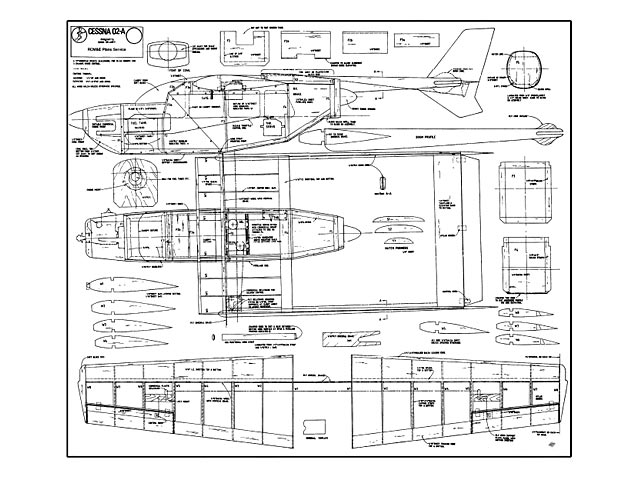 Quote: "Plans for a 51 in twin boom scale sportster. A well used .25 powers the prototype. Another has been flown with a .40 four stroke. It's your choice! Cessna O2-A, by Simon Delaney.

This fun-scale Cessna is a bit of a departure from the normal for me. I usually only build large scale models but I wanted something smaller to fly during the winter months which wouldn't need assembling at the field, therefore giving me maximum flying time and minimum freezing time! This called for a one piece model of about 50in span which could be hand-launched.

I had been toying with the idea of the Cessna for several years as it is an unusual shape and no existing plans or kits are available except for the Royal kit which didn't fit my requirements or my budget. The reason why I hadn't made any positive moves towards building this model in previous winters was through lack of information. A friend had found a tiny 3-view drawing, which I had enlarged enough to take some measurements from and discovered that at 51in the model would be 1/9th scale. At the same time Flypast and Aviation News ran some articles on 02-A's which had been bought from the US government, rescued from Davis Monthan Air Force Base and restored to airworthiness. This seemed a good omen and also gave me my first colour photos, showing a faded grey and white scheme with a black anti-dazzle panel which I felt would be simple to reproduce and, more to the point, quick!

The 02-A is the military version of the Cessna Skymaster and was used by the USAF during the Vietnam war for Forward Air Control and locating downed pilots. The push-pull twin engined concept was ideal for these roles, giving the aircraft over 200mph with 1400 miles range without having any undesirable flight characteristics if one engine was 'shot out'.

So there's the background to the model and the full-size aircraft. If you fancy a scalish model which is simple to build and fly, read on.

Let's start with the fuselage. Make up two sides from 1/8th sheet and glue 1mm ply doublers inside each piece using contact adhesive. Note that the front of the doubler is set 6mm back from the front of the fuselage side to allow the 6mm ply bulkhead F1 to align against it. If you have cut everything squarely then this should automatically give zero thrust to F1.

Glue the 3/16th wing doublers in place then assemble and glue F3 and F4 at right angles to one side. When dry, add the other side, checking for squareness. Once this is complete, glue F2 in place, pulling the fuselage sides in and holding in place with rubber bands or clamps until set. Reinforce this joint with 3/8 triangle strip chamfered to the correct angle. Glue in the 1/8th balsa cross piece and add triangle strengtheners as shown.

Plank or roll 1/8th sheet to form the decking between F1 and F2. Although this is lost under the windscreen blocking, fitted later, it does impart considerable strength to the nose area. 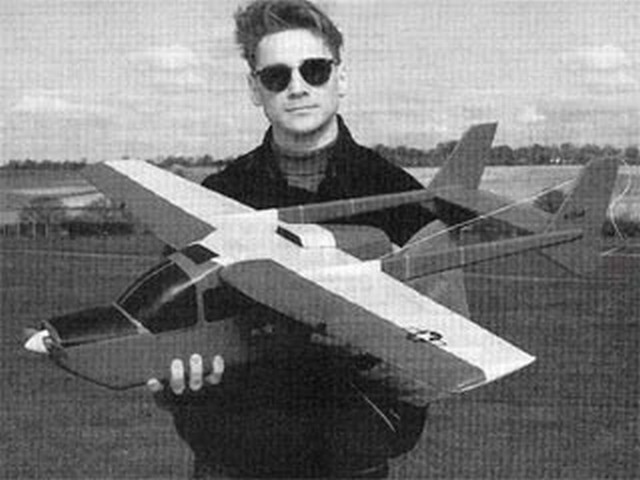