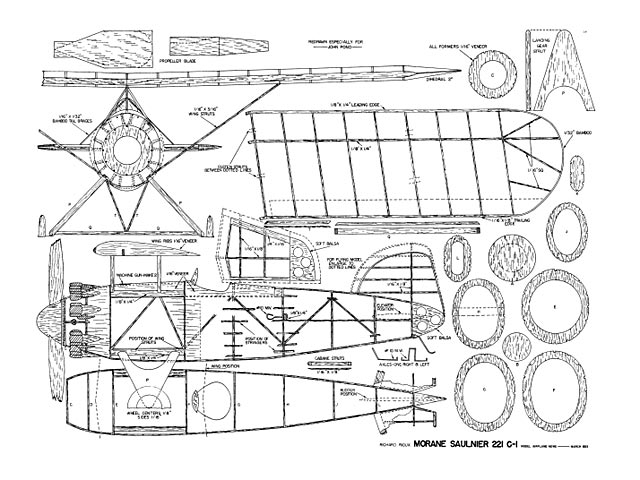 Quote: "Patience While Building This Model Will Give You a Flying Replica of a Modern French Pursuit Ship. Building the Morane-Saulnier Pursuit. By Richard Rioux.

FRANCE is air-minded; there is no doubt about it. The French Air Force is one of Europe's best policemen. You should make a comparison of the foreign planes with those of this country.

The first of the modern French pursuit ships to come before the model builders of America was the Bernard C1, then the Dewoitine D27-C1, which the skillful French pilot, Marcel Doret, so cleverly demonstrated at the National Air Races in Chicago in 1930. Now I take the privilege to present to the readers of Universal Model Airplane News the Morane-Saulnier Type 221-C1 pursuit ship. The makers of this stubby little job have been making monoplanes for years; the World War saw many ancestors of this plane. The real ship is powered with a Gnome-Jupiter 650 horsepower motor, and 'grabs altitude like a homesick angel'

The Fuselage: The fuselage of this model is rather difficult to build, but is very light. It looks bulky, though it is well streamlined. First cut the formers of 1/16 balsa veneer as shown in Figs 3 and 5. There are no main longerons, the formers are separated by stringers only. The stringers are numbered from the top clockwise around the fuse-lage. Put stringers 1, 5, 9 and 13 in place first. Then add stringers 3, 7, 11 and 15 in place and line up the fuselage.

In back of former H and just above stringers 5 and 13, place the rear hook base. This base is made of 1/8 x 1/4 balsa, a rear hook of No 10 music wire is securely mounted in the center of it.

Cover the top of the fuselage between stringers 3 and 15 with smooth 1/64 veneer. Cover as far back as former H. The rest of the nose to a short distance past former F is covered the same way. Veneer covering is not as hard as it seems and it looks great; making the model resemble its metal-clad big brother. Make the tail-piece N of soft balsa and bore three holes through it to lighten it..." 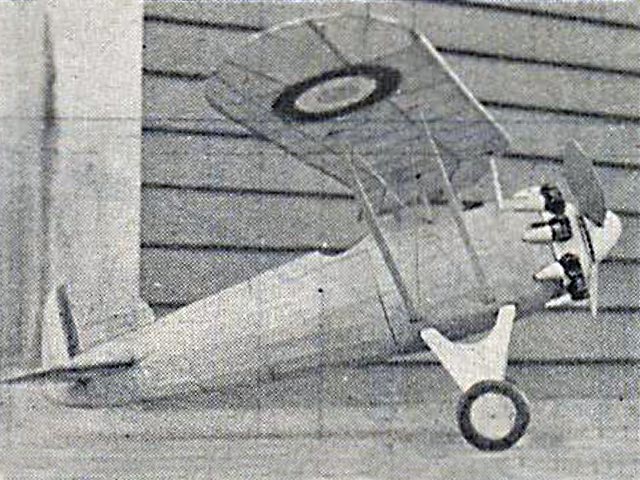 I downloaded the above named plan and after viewing it several times noticed the "D" former is missing, unless it is the former shown on the front-view of the aircraft? Thanks!!
Mitch - 01/05/2020
Hi Mitch, to me it looks like that former in the front view is C. D should be easy enough to draw by yourself as a 1.2in radius circle with notches in their proper places for the fuselage stringers. Remember the 'hole in the middle' for the rubber motor :-)
Miguel - 01/05/2020
Add a comment