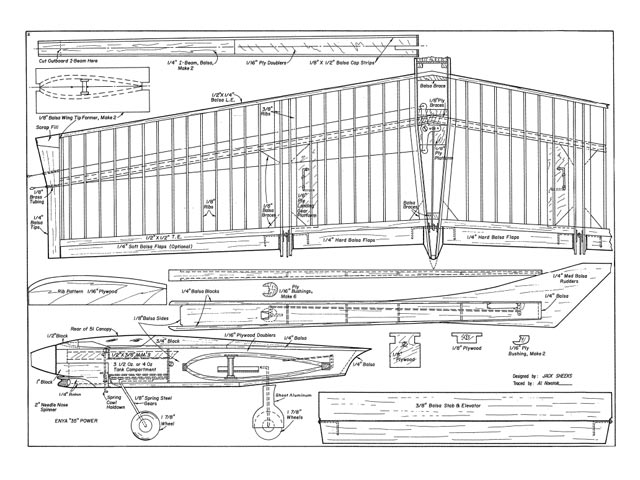 No this is not the ultimate in stunt design and to be honest with you, I don't think you will ever see the ultimate anywhere. Mainly because there isn't such a monster in existence yet. At least that's my opinion anyway. However, this is a good stunter, and I think a cut above the average. At least Jim Vornholt thinks so anyway.

To get this short 'bull' session under way, we have to turn time back to about two months before the GB Nationals. Jim and I, after such skullduggery, finally got our vacations lined up so we could attend the Nationals. After all this great brain work, it dawned on us that Jim didn't have any-thing to fly at the Nationals, except the old Freedom 45, which was getting a little worse for wear. Did I say a little wear? Well let's say it still flys good anyway. I never like to say bad things about the ancient or decrepit, especially since at one time they were young and full of flight. Oh well, we all have to get old sometime.

Anyway, Jim had a choice of either starting a whole new design or building one he had built before. At this time I was testing a new twin boomer in clear-dope. Jim, being partial to twin boomers, liked it, so with little time left he began working to complete one for the Nationals. With only one week left we put the final coats of clear on it. Now we were both ready to go, I had my new 'Scottsman,' design and Jim with a boomer which I named after his new car, 'Torino'. Now to practice, practice, practice. Well on a very bright day, while putting in some practice flights. som-thing happened, that would bring tears to the eyes of a Hobby Horse. A solder joint at the flap horn broke in the out-side half of the Square Eight. Well when the Scottsman hit, the nose went one direction, and the rest of it went the other. There went by hopes of winning the Nationals, but I still had a week to get another ship ready.

Out came the old Ryan (oz4562). During its repair and new paint job, I injured my back to the point. I couldn't attend at all. Now it was up to Jim alone, to carry the Indianapolis Stunt Team colors. He didn't do badly either. He was on the board in 1st place most of the day, till someone decided to re-add the scores. That put him in 6th place on his circle, which can make a fellow feel kinda crummy as it did Jim. But with only a week's practice on a new ship, I feel he did quite well. At least he proved a point, that swept wing stunters are good enough to compete with the best of 'em. And at the Nationals, you compete against the best the country has to offer. So if you would like to try a ship that is not only controversial, but sharp in line, give the Torino a chance. I don't think you will be disappointed.

Construction. Start by shopping for extra light and straight wood, especially since this is a large aircraft. The original Torino weighed in at 47 ounces and was powered by an Enya 35. The ship is sturdy enough to hold a .40 or .45 in case you go overweight.

Now get out your Boy Scout knives or whatever and cut the I-beam and the leading edges from 1/4 in balsa. Be sure and centerline everything in order to insure straightness and alignment. Next cut out the two main body sides and the four boom sides from 1k" balsa. Saw the 1/16 in plywood doublers for the body and I-beam out and glue them into place. Also glue the motor mounts into place at this time.

While these are drying, cut the Stab-Elevator-Flaps and Rudders from 1/4 in balsa..." 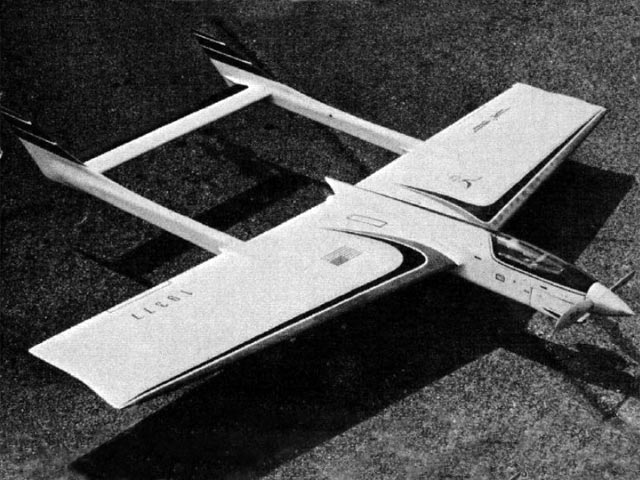 Just a few words about the Torino CL stunt name. Torino is an important Italian town and was the capital of Italy Kingdom from 1861 to 1864. It is considered the Motor Town of Italy, like Detroit in USA. The FIAT and Lancia car company started here, and here are also the most important car design studios (Pininfarina, Ghia, Bertone, Giugiaro, etc) that designed a lot of famous American cars. So Ford named one of his models in honour of this town - Torino. Ford Torino is the red car of Starsky and Hutch, it appeared in "The Great Lebowsky" and "Gran Torino" with Clint Eastwood. Jack Sheeks named this plane Torino after his friend Jim bought this car. Jack was one of the most prolific CL stunt designers with innovative layout.
Pit_Italy - 26/08/2018
Add a comment