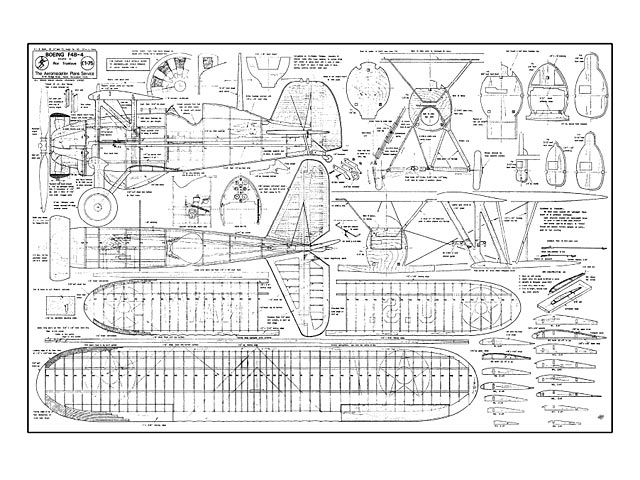 THE BOEING F4B-4 is an attractive scale subject and, following construction and flying experience gained from a 44 in span C/L sport biplane, several features were incorporated in this version, which, at 1/8 scale, has the advantage of being a one piece model without being too cumbersome to transport.

The wing/strut/fuselage connections seemed from the previous model to be the key to the basic structure and it appeared that the following arrangement would be most satisfactory. It will be noted from the drawing that the lower wing halves are fitted onto the bottom fuselage taking their dihedral braces from the 1/16 ply former F4, whilst the upper wing, which is flat and in one piece, has its main spars securely fixed by 14 swg piano wire to formers F2 and F4. This forms the basis of the wing/fuselage connections, and the interplane struts, aileron link rods and wing bracing wires are for appearance only and are therefore, only lightly glued in place. This system was proved on the sport biplane when it inadvertently landed on its right lower wing and completely demolished it, but left the remainder of the airframe unscathed.

Other features include a drooping undercarriage, which consists of lightly sprung telescopic legs - the spring assisting drooping only. Stronger springs, incidentally, would produce an unwanted bouncing effect upon landing. The glow motor, mounted inverted to reveal as little of itself as possible, was fitted with a home-made internally situated silencer, but this is something of a luxury as it takes a lot of precision machining to produce, and a commercial silencer (shown on drawing) is permissible in competitions anyway.

A standard Roberts three line system with upright plane unit (bellcrank) provides the linkage to the engine's throttle control, a must for this type of model. The scale spacing of the ribs adds a lot to the appearance of the model and is much easier to achieve than first appears, given a little organisation.

The first items to build are the construction jigs for the built up ribs R2 and W2 (see sketch), so that to save time these ribs can be built during the construction of the fuselage. The jigs, consisting of 1/16 ply mounted on a softwood base, are well waxed with a candle before each rib is glued in place. To make the ribs, the two 1/16 sq upper strips are glued together and pinned in place first, followed by the short strips (and triangular TE piece on W2), and finally the lower strips. The assembly is then put aside to dry, whilst attention is turned to the fuselage construction. By this method, the ribs can be built slowly without really wasting any time - when each rib is thoroughly dry, the pins are removed, the ribs cut to size, following lines marked on the jig, and carefully removed, ready for the next one. Thirty W2s are required and 22 R2s, plus a few spares of each.

The fuselage is started by cutting formers F1 to F9 marking centre lines on same. Drill F1 to suit the engine mount, throttle pushrod and tank pipes, then assemble mount to former, and epoxy anchor nuts to the rear face. Remove mount when epoxy is set. The plan shows two types of undercarriage: fixed or drooping. Select your choice, then bend 12swg main wire..." 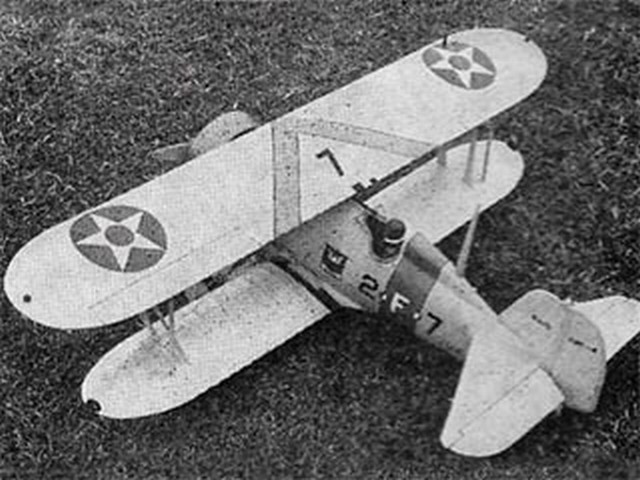