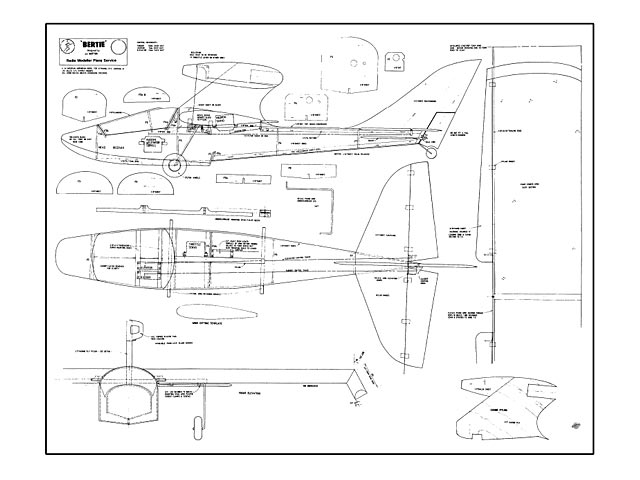 Quote: "What chance another wet summer? Be prepared with this unorthodox 44 inch span amphibian for .20 to .25 engines! Bertie, by John Rutter.

This particular model arose from the need to have a second model for a September Kielder event - it's a long way to go only to have something go wrong with your one and only model. As usual the model had to be simple to make and fairly viceless in the air as it was likely to make its maiden flight on the day. (I drew the model up only 7 days before the event, you see.)

As it happened, although I built the prototype in only five days, I decided the weather for that weekend looked pretty awful and didn't go. This gave more time to finish the model with some flashy colour scheme and the results are in the photos. Now that colour scheme looked nice with the wings and hull separate but once joined the whole thing was a bit over the top. This led naturally to the name, Bertie Bassett being the liquorice Allsort man!

Due to the need for speedy construction 1 decided to use the wing section I used on 'Zack', a previous model. This was intended originally for a trainer and gave good flying characteristics but its main advantage was that it had no separate leading edge and could be flown with simple sheet ailerons, all of which meant that it could be assembled very quickly indeed. Anyway, I still had the jig.

Let's start! The flying surfaces are the easiest place to start. Once the wing has been veneered the tip and root are squared off and the trailing edges cut to allow a piece of balsa about 5/16in x 1/4in to be glued to it. When stuck in place and trimmed up with razor plane and glasspaper this forms the trailing edge. I cut the ply motor mount/pylon from 1/2 in marine ply which is nice and strong but hardly lightweight. The throttle servo could be screwed to rails that are formed from this ply as it's cut out but this would make joining the wings difficult. Instead I chose to put cutouts into the pylon ready for servo rails to be added later.

When the trailing edge has been trimmed to match the wing, mark a centre line on the tips and cut a strip of scrap balsa at least as long as the chord, preferably a bit longer, and just sufficient in width so that it touches the building board when pinned along the centre line you've just marked out. These strips should ensure that when you epoxy the pylon in place the wings are joined at the same incidence. Make sure that you put epoxy on the ends of the veneer rather than on the foam; this will give a much stronger joint than relying on a foam-to-foam joint. Blocks of scrap under the TE of the pylon..." 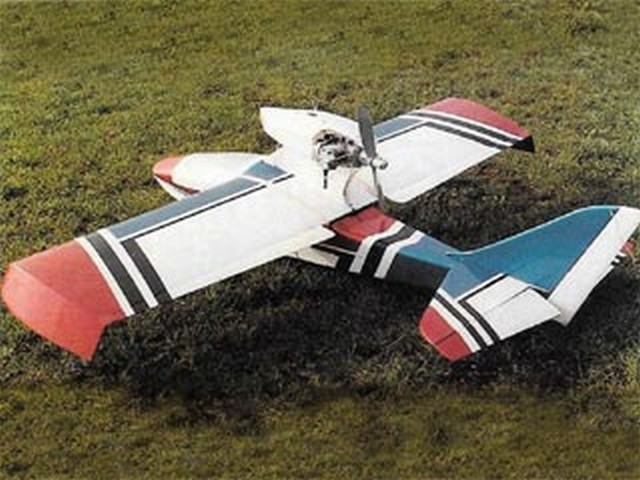 I made one change to the model after submission to the magazine that's relevant. Having discovered that once it left the ground the rudder worked in reverse IE left command gave a right turn, I gave the wing a bit of dihedral, about an inch under each tip if I remember correctly. This got the rudder working in the correct sense on the ground AND in the air and even made a small improvement to the water handling as it kept the tips well clear of the water on take off and landing. Much easier to do this before construction is completed.
John Rutter - 16/05/2020
Add a comment