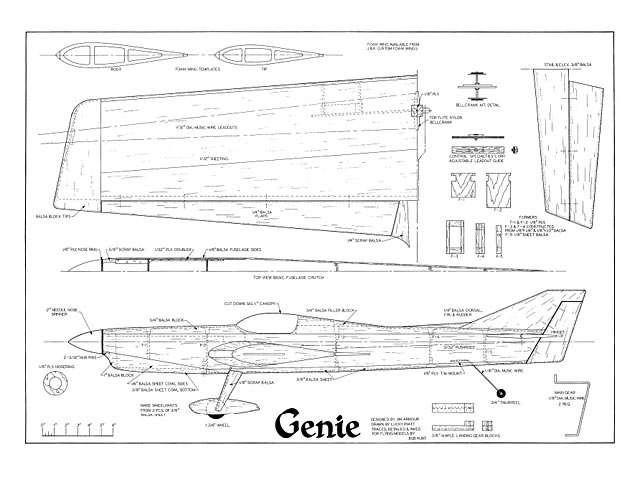 Quote: "This state of the art stunter incorporates the latest in adjustable trim features. Genie, by Jim Armour.

After arriving home from the '75 Nats, I was convinced that a .46 size airplane was the only way to go. At the time, I was flying a .35 size Miss Kell (oz10251) design of Bob Whitely, which flew very well. Ideas for a new ship were formulating in my mind, but building time seemed scarce and elusive. The decision to build Genie was made for me when Miss Kell failed to complete the third corner of a triangle at a local contest. With no backup airplane to fly, priority was placed on my first .46 stunter.

Of all the .46 size airplanes that I had watched at the nats, Bob Hunt's Genesis (oz7572) seemed to turn the best corners. Yes, you guessed it, I ordered a wing cut to my dimensions.

Sketches were made, plans were finally drawn up, and three months later, Genei was finally born. The following Sunday, Bob Whitely and I were out at the flying field, at what seemed like the crack of dawn. I elected to give him the first flight, then he took the second flight, then the third flight! Not trying to sound too eager, I asked what about my flying the airplane - We're closing in, he replied. Just a tad more tip weight, and I think we've got it.

Let me say here, that Bob is one of the best 'trim men' in the business. He had the ship sorted out in short order, and somewhere around flight six I found myself with the handle in my hands. After putting the ship through the pattern, I knew it was far better than anything I had previously flown. As I walked back from the handle, Bob had that cheshire-cat grin on his face that told me I had just experienced what he already knew. After the twelfth flight we called it a day, and headed for home. (I got the last six - well, maybe four.)

On the 14th flight, Genie earned 1st Place expert, flying against stiff competition, despite my knocking knees and shaking hand. After five years of building & flying, things were starting to fall in place.

Areas and moments. The wing on my current ship is from J & K Custom Foam Wings, 10261 Janice Lynn Drive, Cypress, California 90630. Just tell John what you want, and he will cut you a wing or stab, somewhere between excellent and outstanding.

The wing is almost 700 sq in, which includes flaps & tips. Build this assembly complete with the flaps operational and set it aside. At the proper time you will simply cut open the bottom of the fuselage and drop the wing straight in. I have tried stab and elevator areas of between 18% to 22%. The difference seems to be very subtle and, to me, depends on whether you trim nose heavy or slightly tail heavy. Going below 18% would seem futile to me for best performance. If the ship is nose heavy, add tail weight until it wants to washboard in level flight. Then remove weight until it tracks good..." 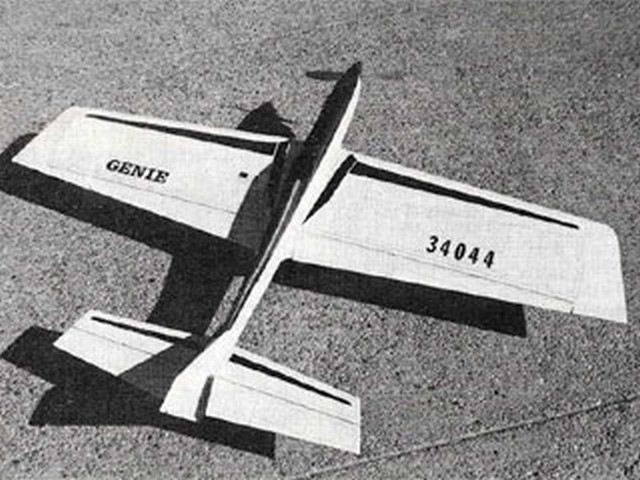