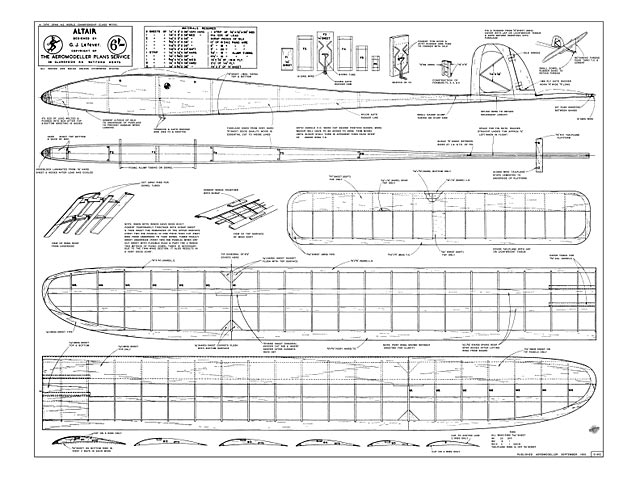 Altair. A 79 inch free flight A2 glider by G Lefever from AeroModeller September 1955.

Quote: "Top Place Glider in the A/2 Trials. Altair, designed by GT Lefever.

Those who attended the Team Trials held under very blustery conditions at Odiham this year, will agree that the top place model and modeller are a pair to be reckoned with.

GJ Lefever, the one half of the combination, hails from Chingford, was a former member of the West Essex Club, and is now an SMAE Country Member. A civil engineer by profession, and twenty-three years of age, he at present restricts his interests to A/2's, but hopes to have a go at Wakefields next season. He built the original prototypes of Altair (yes, there were two of them) early in 1952. They differed only slightly from the version presented here. The first was lost during trimming, the second lasted three years, and saw the designer through two years eliminators and finals.

In the 1953 London Area eliminators the model placed top with three five-minute maximums and a timed aggregate of 12:50. At the Trials only two flights were recorded of 3:40 and 5 min, the model being lost after the second. It was subsequently returned from Oxford several weeks later. Although not flown in the 1954 eliminators, it returned the modest aggregate of 16 min over the two eliminators for the 1955 finals, this performance from the 164 feet towline, and on a five-flight basis. At the Trials at Odiham flights of 2:55, 3:0, 2:49, 1:35 and 2:40 were recorded. The faithful old original was used for the first flight, and although it DT'd the model was not recovered. Altair was used for the remaining flights, the DT terminating all but the fourth flight.

Construction. Good quality wood is essential, particularly for the fuselage sides and the wing spars.

Fuselage. Cut sides from ith sheet and splice at rear to accommodate length. Sand well and cut holes for wing retaining dowels. Cement sides together with scrap 1/8 sheet between, leaving slot for fin, then cement main 1/4 in sheet former in position remembering to first fix the tow hook, etc, in position. Build the weight box, hold the fuselage together with bands and fit the remaining formers. Install the auto rudder, then sheet top and bottom of fuselage and sand smooth all over. Melt 1 oz. of lead and while this is 'brewing' wet the weight box thoroughly. Pour molten lead into box, ignoring clouds of steam! Cement laminated nose-block in position when steam has subsided.

Wings. More time will need to be spent on the wings than the rest of the model combined. Certainly they should be built with great care, as a high aspect ratio wing is prone to warps. The lower spar is cemented in position after the wing is lifted from the board, and the leading edge is sheeted with 1/16th, and 1/32nd at the tips. The two wing halves are then joined together temporarily with scrap sheet and the top sheeting added so that it continues across the four centre rib panels. The dowel tubes are rolled from paper and inserted in the centre section from the underside..." 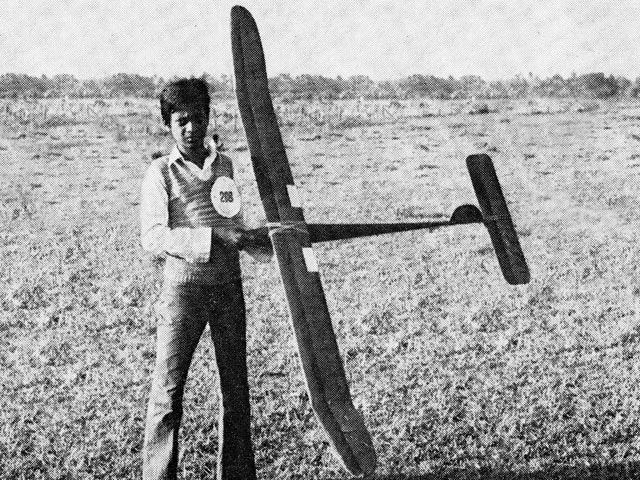