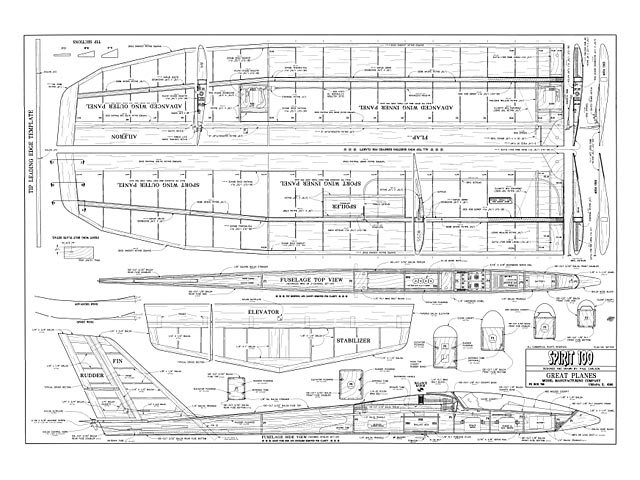 This is a discontinued kit from Great Planes. See https://www.greatplanes.com/discontinued/gpma0550.php for more details, including free downloads of kit manual and parts list.

The Spirit 100 can be built with either of two wing options. The first wing choice features a Selig 3010 airfoil and spoiler option - perfect for beginners and intermediates interested in a wide speed range. The second includes flaps, ailerons and a highly-efficient Selig 7037 airfoil for the advanced performance that experienced pilots demand.

Great Planes' interlocking parts and step-by-step, photo-illustrated instructions (including instructions for ailerons and flaps) assure easy assembly of either wing - even for beginners. Canopy, molded cockpit and hardware are included..."

There comes a time when you've taken your basic 2-meter sailplane about as far as it will go. Maybe you want to try the features available in advanced radios. Maybe you want to fly a more capable and versatile sailplane but maybe you're not ready to spend $300 on it. The Spirit 100 made by Great Planes Model Manufacturing Company (PO Box 9021, Champaign, IL 61826-9021) lets you far exceed the limitations of typical standard class built-up sailplanes, and it does this at a relatively low cost.

This kit provides parts and instructions to construct your choice of polyhedral or ailerons for roll control, and to select spoilers or flaps for glide path control. Two sets of wing ribs are provided: Selig 3010 ribs for higher lift, and Selig-Donovan 7037 ribs for higher speed.

You can get by with a simple radio or make good use of a full-blown computer radio. In addition to personal taste and experience, finances may enter the picture, as the poly version needs only two or three servos for rudder, elevator and optional spoilers, while the aileron version with flaps takes five servos, two standard size in the fuselage and three small servos inside the wing.

I like simple radios so rudder and elevator ships have served me well over the last three contest seasons. For this project I built a polyhedral wing with flaps - not one of the suggested options, but one that works for me, as this was my third sailplane with that configuration. I modified a standard size servo to fit in the wing, and now I have a sailplane that's competitive in club contests with the simplest of four channel radios.

Kit contents The kit includes all the balsa, light poplar plywood, birch plywood, and much of the hardware needed to build wing version. A tow hook, stickers, a clear canopy and molded pilot are included, while the builder provides his choice of pushrods and hinges. Careful wood selection, quality machine cutting, and good die-cutting make high grade parts. The pre-cut shear webs really fit well as do the ribs and die-cut ply parts.

The full size, rolled plans are particularly clear, comprehensive, and informative. The exhaustive 54-page instruction manual takes the builder through the construction process with 190 photographs and 20 diagrams. It includes information on trim flights, slope soaring, and thermal soaring. Great Planes has done an excellent job on the plans and the manual, making this model a practical project for the less experienced builder as well as old pros.

The fin, rudder, and stabilizer are built up from sticks and die-cut parts. Tapered balsa is provided for the elevator. The fuselage is a long box built up from interlocking balsa sides and doublers with light ply formers, and birch ply blocks to receive the wing mounting bolts. Compared to other similar sailplanes, this fuselage builds easy, straight and strong, especially with the gauges and clamps provided.

The wings are built up from balsa ribs with basswood spars and shear webs. Balsa sheeting covers the top leading edge of the inner panels (for strength and stiffness), but not on the outer panels (to lighten the tips for quicker turning). The wing leading edge stock comes shaped, but the four pieces are connected and require some precise knife work to separate. Great Planes covers this in the manual, but they've done 95% of the milling work here, why not finish the job?

One building tip is in order: the wing mounting bolts are located close enough to the fuselage sides to interfere with the control pushrods if you're not extremely careful. I suggest locating the bolt holes Vs or Ms inch closer to the fuselage center line to give an extra margin.

Strengthening the wing: During the last year, reports of Spirit 100 wings breaking on hard launches appeared in the model press and in discussions on CompuServe. I contacted Paul Carlson, the model's designer, who acknowledged there had been wing failures in cases of 'gorilla' winch launches. Paul suggested that to prepare the Spirit 100 for extreme stress launches:

1. Add carbon fiber to the main spar.
2. Add it to the sub trailing edge.
3. Replace the balsa shear webs with unequal length plywood braces near the wing root.
4. Enlarge the rear wing hold down plates.

Paul sent me a drawing and I made these modifications to my model. The factory now includes this information in a 'Performance Addendum' sheet packed in Spirit 100 kits, or available for the asking. The kit builder can chose to make the modifications or not, depending on how he expects to use the airplane. Bravo Great Planes!

Even with the wing strengthening modifications there's nothing complicated about building the model, but I wouldn't classify it as a beginner's kit. The process is carefully explained in the manual, and seems to me well within the capabilities of the average modeler. Construction and covering took me 55 hours over 12 evening and weekend sessions in less than two weeks..." 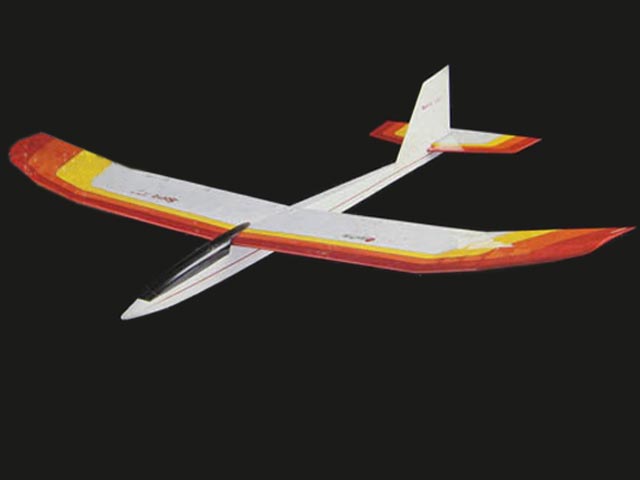