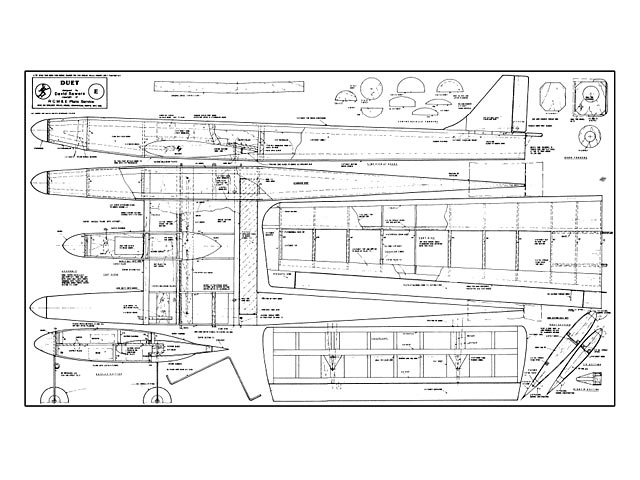 There are two schools of thought about twin engined models. Some say 'easy' and some say 'impossible'. After some experimenting, I say it's inbetween. It is certainly possible for a pilot of average ability to fly a twin but there are some things to watch out for. It's always useful someone pointing out what these dangers are, but really there's no substitute for experience. The intention of this article is to introduce you to Duet, a trainer for twins which is easy to build, sufficiently forgiving to let you make mistakes and that should stay in one piece long enough for you to learn from them. Anyone with a little aileron experience will be able to fly Duet, but it also has enough features to interest the more experienced pilot. All in all, Duet is an ideal introduction to multi-engined flying.

My first encounter with twin engined models was when one of our club members brought a De Havilland Hornet along to the flying field one summer afternoon. As soon as the engines were beating in tune, I knew I was hooked; the sound was beautiful. This was something I wanted to try. However, this model just would not fly and after spending ages trying to set up the engines, a dolly launch was attempted on a rather rickety dolly. It meandered down the strip, eventually executing a graceful arc to the left which unceremoniously dumped the model in the rough. After several attempts on the dolly with similar results, hand launching was resorted to. This was even worse, on leaving the hand, one or other of the engines surged, causing the model to cartwheel across the ground. After a couple of attempts, the inevitable happened - and out came the bin bag. The plane had apparently flown successfully on at least one previous occasion but its ignominious demise was not mourned by its owner who pronounced it more trouble than it was worth. Bearing in mind that the Hornet's pilot is considerably more skilled than myself, I should have quit then, but no, I relish a challenge.

Talking to several people about the problems with twins, the general consensus was that the asymetric thrust, generated when one engine faltered or cut, was the worst problem. This is particularly disastrous on take-off, of course, since the plane is quite close to the stall - and the ground! So, I looked around for a plan or a kit I could build with two engines close together. There may well be one out there somewhere, but I couldn't find it, so I designed my own.

Design Criteria. Apart from having the engines close together, I had several other design considerations in mind:

1. The engines must be easy to start and reliable. I had a Super Tigre S29 that fitted that bill, so only needing one more helped to keep the cost down. As a general rule, larger engines are easier to start and in'my experience more reliable. For this design, the Super Tigres provide plenty of power, although I wouldn't want to have much less. 2. The model must be capable not just of single engined flight but have enough power in one engine to get it out of trouble. So, not too large or heavy a model. Conversely, larger models tend to be smoother and easier to fly. I decided on a 6ft span, which eventually turned out at 73in. I didn't pay too much attention to the weight whilst building but it came out just a shade over 6lb, which is not bad for a model of this size with two lumps of metal up front.
3. Since I feared that the model would not last too long, it had to be of simple construction and strong.
4. The model must be aerobatic. I quickly get bored just pottering around the sky.

Putting these requirements together, I came up with a Mark 1 design. Basically, the Mark 2 as presented here is the same but slightly prettier - sleekified, someone called it. I wouldn't have bothered for myself, but the editor insisted.

Twin booms with twin fins has the additional advantage that there is a rudder in each propwash which is useful in trimming for single engine flight. I listened to a lot of arguments about the best thrust angles (out thrust, in thrust, up thrust and down thrust) but since this was inconclusive, I decided to ignore the lot. Consequently, all the incidences are set at zero degrees. It works fine, so I guess its okay.

Construction Notes. Fuselages. Each fuselage boom is built on top of a 1/4 x 3 in sheet. Draw a centre line down the sheet and glue the formers vertically. Add the 1/2 in triangular between the three formers and the fuselage top. Glue the 1/32 ply doublers on the front fuselage sides.

I notice that virtually every constructional description I've read in this and other magazines reminds builders about getting a left hand a right hand side. I always scoffed at this, and anyway, with four sides to do there's two changes to get it right. I still managed to end up with three rights, though!

Anyway, glue the fuselage sides to F3 and F4 and to the 1/4 in sheet between them. When dry, pull in the front and back using the centre line as a guide and there you have it; nice and square without a jig. Add the rest of the triangular section strips and you're almost there.

The engine installations are completely separate with one tank and one throttle servo for each..." 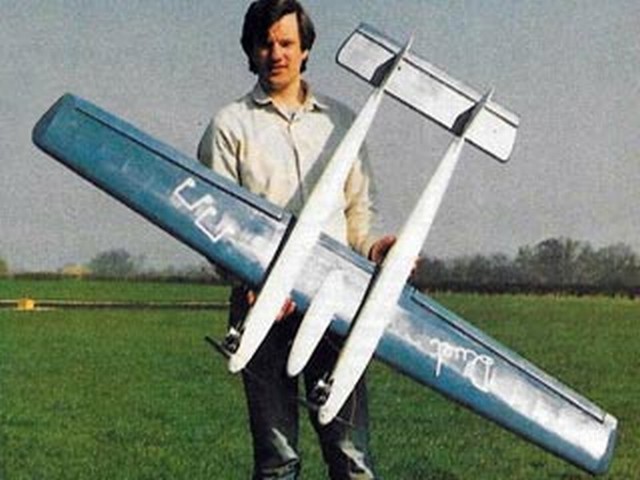