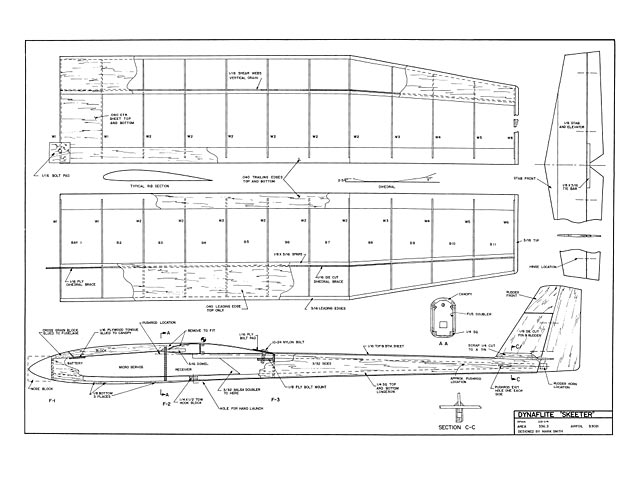 Quote: "The Skeeter is an attractive, easy to build, all wood polyhedral Hand Launched Glider (HLG). With its 55-1/2 inch wingspan and Selig 3021 airfoil, the Skeeter is a real winner. You will have many hours of fun with this little ship and never have to chase a Hi-Start.

The Skeeter is easy to build and cover with its liteweight all balsa conventional construction. The polyhedral wing, along with simple 2-channel (elevator and rudder) control make for gentle, forgiving flights. The Skeeter, with its ideal proportions, is perfectly suited for small flying sites. So go ahead - enjoy, and don't let those little flying sites get in the way of your fun!"

Quote: "At Dynaflite we take pride in offering kits that are simple and straightforward to build and provide value for your modeling dollar. Although the Skeeter is small and easy to build, we recommend seeking the help of an experienced modeler if this is your first kit. Your local hobby shop or model club are prime sources of modeling information.

GET READY TO BUILD:

1. Unroll the plan sheet. Reroll the plan inside out to make it lie flat.
2. Remove all parts from the box. As you do, determine the name of each part by comparing if with the plans/ instruction manual and parts list included with this kit. Using a felt-tip or ballpoint pen/ lightly write the part name or size on each piece to avoid confusion later. Use the die-cut patterns shown on page 4 to identify the die-cut parts and mark them before removing them from the sheet. Save all leftovers. If any of the die-cut parts are difficult to punch out/ do not force them! Instead, cut around the parts with a hobby knife. After punching out the die-cut parts/ use your bar sander or sanding block to lightly sand the edges to remove any die-cutting irregularities or slivers.
3. As you identify and mark the parts/ separate them into groups/ such as fuse (fuselage)/ wing/ fin, stab (stabilizer) and hardware.

1. Start the wing by placing the wing portion of the plans on the building board. Cover the plans with wax paper or plastic wrap. This is to prevent the wing from becoming glued to the plans.
2. Pin the bottom .040 x 15/16 sheet trailing edge over the drawings. NOTE .040 is the thinnest of the sheeting.
3. Pin the 1/8 x 3/16 hardwood bottomspars over the drawings.
4. Glue the .040 bottom sheet between the spar and the trailing edge sheet. Refer to the sketch above.
5. Glue the ribs in place from the center to the tip as shown on the plans. We will cut the ribs later for the polyhedral braces. The ribs should fit as shown above.
6. Test fit the 1/8 x 3/16 spar into place. If it doesn't fit properly, enlarge the notches in the ribs so the spar fits completely in the notch. This is important so the .040 LE sheet will blend with the rear portion of the rib. Glue the spar in place with thin CA.
7. Cut the shear webs from the 1/16 x 3 in balsa sheet. Glue the shear webs into place between the ribs. Be sure the grain runs vertically. NOTE: Do Not install the shear webs where the polyhedral braces will be installed later.
8. Sand the shear webs so they are flush with the top of the spar.
9. Glue the 3/16 x 1/4 leading edges to the front of the ribs... " 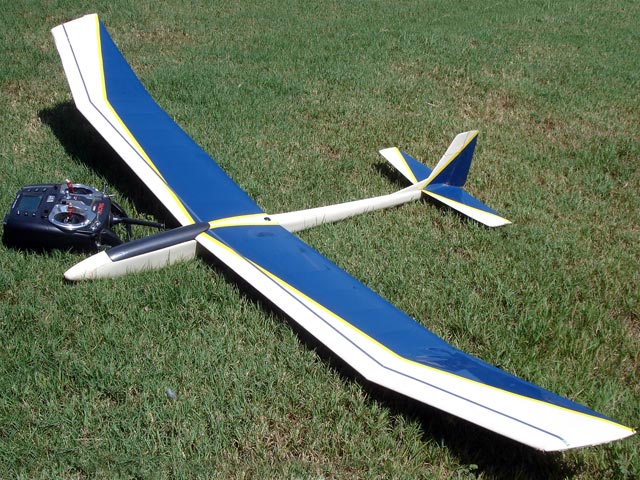 I built a Skeeter years ago, shortly after the kit came out. It was the first really viable RC HLG I had. Mine was modified with tapered tips that extended the span to 59 inches. I also used built up tail surfaces, eliminated the rudder overhang, and used pull-pull controls. Built this way, the weight was reasonable. It's about 255 grams now, but with the battery, receiver and the hatch it was probably around 330 grams. With today's radio gear, it would probably lose 40 to 60 grams. The handling was very nice. By the standards of the time, the performance was good, despite all the comments dissing it on internet mailing lists. Maybe the extra span made a big difference. I considered making a 2 meter version, which would probably be an excellent flier. I seem to remember that the die crushing (as opposed to die cutting) was a bit rough. I covered mine with Micafilm. That was ok, except that I'd get a bit of flutter when launching with a small but moderately strong high start. So for someone with a strong arm or a high start, Monokote or Ultrakote might be better for the center section. Sheeting the lower front of the center section, or using diagonal braces, might also solve that problem. These days, I'd only build something like this for nostalgia, or maybe for some relaxed slope soaring. For flatland hand launched flying, the D J Aerotech Chrysalis outclasses the Skeeter, as it was designed to do. But you won't find a plan for that one! I wonder how the Skeeter would do with a thinner airfoil and lighter radio gear?
LincolnR - 07/08/2018
I asked Lincoln for a photo and he kindly sent the image at more pics 004, with this caveat: "I hope you'll forgive the dilapidated state of the model and the missing hatch. And please note that it's been modified, as described in my previous post." Thanks Lincoln :)
Mary - 09/08/2018
I converted this glider to electric using a Tahmazo Apollo motor/ prop unit and a 500-600 mah 3s battery near the c of g. It makes a lovely lightweight combination that thermals in the lightest lift.
Fred Burman - 30/05/2019
The plans show the shear webs and dihedral braces going in front of the spar. The instruction book showed the dihedral braces behind the spar. If you follow the instructions and sheet the front of the wing then you are not able to clamp down the dihedral braces. I put both the shear webs and braces behind the spar.
Dave Pentland - 21/04/2020
Great page. I was wondering if anyone has a scan of the die cut patterns. Would be really helpful.
Robert - 14/06/2020
Hi Steve & Mary, I just found this photo of my unmodified Skeeter that I built from the kit back in 2008 [pic 006]. It is a very handy little model for light wind days on the slope. Best regards,
RussellH - 19/06/2020
I don't know if it is just an issue with my web browser, but the main pic and pic 005 appear to be identical, while the Skeeter image that I submitted does not appear at all.
Russell H - 22/06/2020
Hi Russel, yes that's your browser caching the old version of the pic. You need to force a refresh. Thanks for the great pic.
SteveWMD - 22/06/2020
Yes, it is a web browser problem. MS Internet Explorer shows the image I sent you as the main picture while Google Chrome shows the old image. No amount of refreshing/reloading will change this.
Russell H - 22/06/2020
Chrome, on a PC? That's my setup here. Have you tried Ctrl+F5? That works for me every time.
SteveWMD - 22/06/2020
Thanks, ctrl+F5 did the trick. I'll have to remember that for the future.
Russell H - 22/06/2020
Here's a couple of pictures of the Skeeter I built [main pic, 007] from a Dynaflite kit in 1993 (plan oz10309) . It was originally equipped with Airtronics gear. I flew it for about a year, then it followed me around in storage for nearly 20 years. In 2014 I replaced the receiver and battery with Tactic gear and put it back in the air. Flying weight with a 250mA 2s battery is just over 10 oz (about 300 grams). After the refresh it thermalled nicely from hand launches on warm Georgia days. Haven't flown it much since I moved to Texas as I've been primarily flying free flight.
Mike Kelly - 30/09/2021
Add a comment