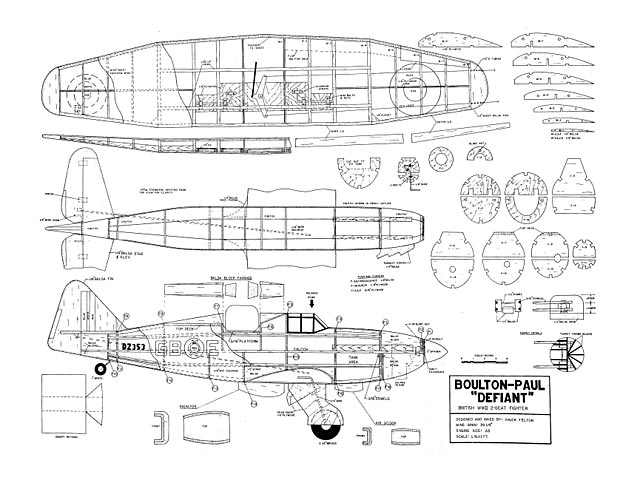 Quote: "Control Line Scale 1 in to the foot of well-known WW II fighter/interceptor that performed valiantly in the early part of the war. Good looking machine with rear gun turret should hold its own at any contest. Boulton Paul Defiant by Charles Felton.

In the 1930's, the increasing speed of new military aircraft made the problem of manual gun traverse progressively more difficult. Following successful developments by the French aircraft industry, the practice of concentrating defensive armament in turrest commenced. In 1935 the British Air Ministry issued Specification F.9/35 calling for a two-seat fighter, main armament of which was to be concentrated in a turret. It was felt that a turret fighter offered increasing operational flexibility, capable of engaging enemy bombers from many quarters, particularly from below, and a 360° upper hemisphere field of fire was therefore specified. It was also intended that the fighter should have a performance approaching that of any contemporary single-seat fighter despite the weight and drag penalties of the turret.

The Boulton & Paul Company, having successfully wedded a power-operated turret to a Sidestrand bomber in 1931, submitted plans for a fighter, designated the 'Defiant,' superficially similar in size and appearance to the Hawker Hurricane. On a wing span of only 39 feet 4 inches, with an area of 250 square feet, it carried 1500 pounds more weight than the Hurricane, whose comparative measurements were 40 feet and 257 square feet. A clean design was achieved with a simple weight-saving structure.

The Defiants did have their moment of glory. They distinguished themselves during the fighting over the Dunkirk beaches during the evacuation of the British Expeditionary Force. Defiants and Hurricanes were mixed in formation and the resultant confusion of the German pilots led to a heavy loss of enemy fighter planes to the guns of the Defiants.

This model is built to a 1 in scale which gives it a wingspan of just over 39 in and a length of 35 in. The engine is an O.S. Max 35 which provides ample power for good per-formance. Now for the construction details.

Construction. Wing. Cut out all wing ribs. Cut out holes in ribs for the bellcrank leadout wires in left ribs only. The inner wing section is made first. Pin ribs W-1 through W-4 upright over plans, flat edge down. Glue two 1/8 x 1/4 spars across the top of the ribs from W4 left side to W4 right side. When dry, remove from board, turn the assembly upside down over the plans and pin the installed spars flat to the plans.

Glue 1/8 x 1/4 spars across the bottom edge of ribs and splice at centerline as shown in the wing front view. Remove from plans and set aside to dry. Cut out two outer wing spars from 1/8 plywood and pin upright over plans..." 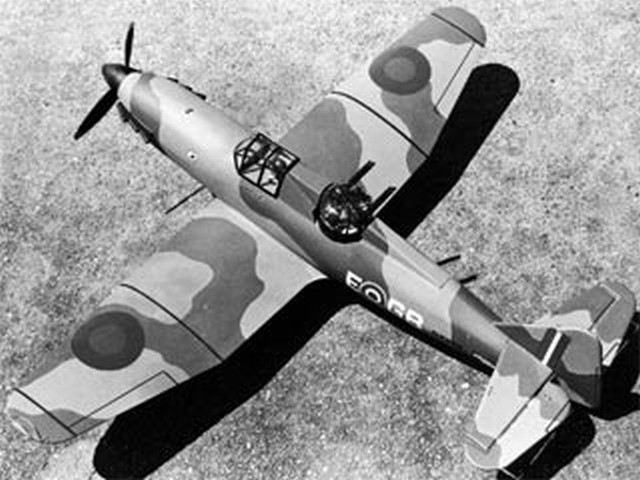