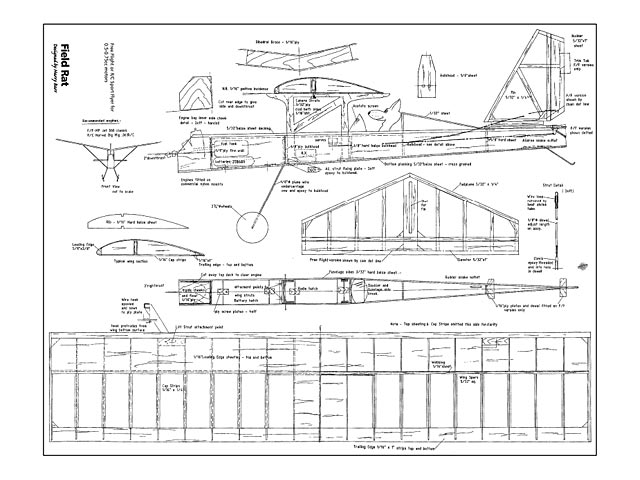 The Field Rat is a follow-up to the original Hangar Rat (oz10107) that I had published in August 1979 in the now defunct 'Model Builder' magazine. Aero Modeller re-issued the drawings a couple of years ago and the Hangar Rat has become quite popular again, not only in Canada, but in a number of other countries as well. The Aero Modeller King Rat Trophy was the prime mover in this revival thanks to Ken Sheppard. Tossed in were a number of postal competitions and, as in our case, club indoor competitions over the winter months, as well as various other clubs. As an example, our second indoor evening this autumn saw eight Rats, all flying with requests for several sets of drawings for the weeks coming.

A fellow club member, Andy Chisholm, and myself decided this past summer that an outdoor version of the Hangar Rat would seem to be in order; hence the arrival on-scene of the Field Rat (FR). Andy initiated the prototype drawings and we were off. The FR is exactly twice the size of the indoor HR version, giving us a thirty nine and a half inch wingspan, and follows the outline of the original as closely as possible, allowing for liberties to increase strength for the rigours of outdoor flying. To test the feasibility of the design, Andy has built the R/C version, while I have built a (gasp!) Free Flight (FF) version.

This article will concentrate on the FF version, with a few notes to give some ideas re the R/C structure. This is a simple machine to build, and will be presented with the idea in mind that you've built one or two aircraft before. Many of my ideas might not appeal to you, as we all have our own favourite ways of doing things, so feel free.

A final thought before starting - strive for a weight of six ounces or less for F/F, or 10oz. for R/C. Mine met the six ounce target, powered by an OK Cub .049B, running at a reduced power for lazy flights.

Wood selection. Wood should be selected with light weight in mind. Spars are the possible exception, where a harder material would not go amiss. Most plywood is 1/32 birch ply, with the exception of the firewall, which is 3/32 birch. Prior to beginning construction, I made up a sheet of two-ply balsa from 1/20 material. I used this for the bulkheads. The cross grain makeup of the material resists crushing of the fuselage during handling, and adds very little extra weight. The forward cabane bulkhead is additionally faced on both sides with 1/32 ply. Fuselage sides are 1/20 sheet, and top and bottom skins are 1/32. If you can't get 1/20 sheet, substitute 1/16 stock.

Upper and lower fuselage skins are applied with the grain at 45 degrees on one surface and the opposing surface grain direction is perpendicular to its mate. Wing spar shear is taken up by the use of a truss system rather than solid web sheeting between spars..." 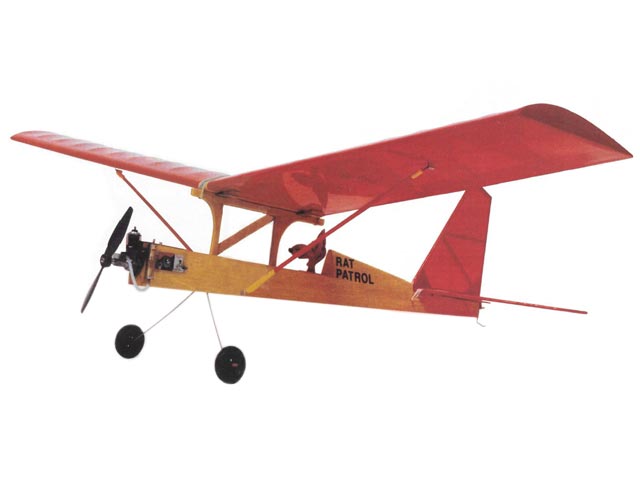