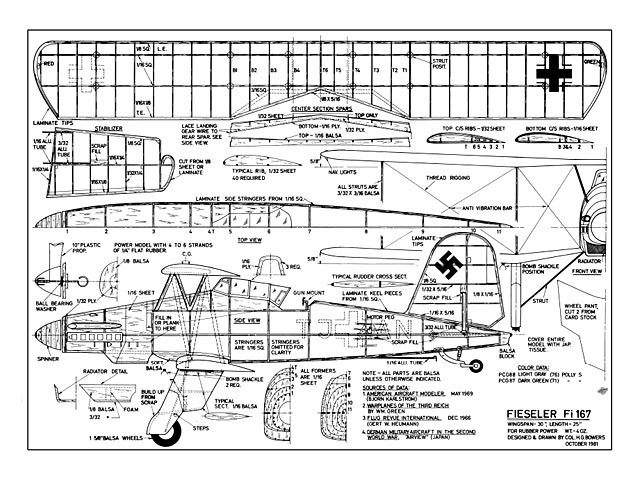 The first question one may ask is why on earth select the Fieseler 167 as a modeling subject? Well, it all goes back to our favorite pastime in the environs of Washington. Many of us who are members of the diminishing energy elite (talk more - build less) like to spend evenings going through each others' libraries and plan collections and comment on the ugliest airplanes we can find. Well, now just what makes an airplane either ugly or beautiful? Could the old cliche - beauty is in the eyes of the beholder - apply? Definitely, yes. I like the big old 'turkey' biplanes, such as the Martins, Vildebeests, Wallaces, and even the Blackburn Blackburn. To me they are stable and functional machines, and deserve more attention from modelers. But the one that got my attention, from a modeling point of view, was the Fieseler. Everything about it is right. Adequate wing and tail area, wonderful nose moment, and a landing gear designed by none other than a modeler of rubber powered airplanes. It just had to be good; and it is.

The subject was designed by Fieseler engineer Reinhold Mewes in 1937, in competition with Arado for a multi-purpose, ship. board aircraft to operate from the programmed carrier, the Graf Zeppelin. Three of each were produced and tested, the Arado 195 not meeting the required standards. On the other hand, the Fieseler 167 exceeded requirements and a pre-production order for twelve aircraft was placed.

In May 1940, construction of the carrier Graf Zeppelin was halted, but manufacture of the twelve Fi 167 aircraft continued and all were assigned to the Luftwaffe, subsequently being based in the Netherlands and participating in coastal patrol, and other similar missions. As an interesting additional use, three of the aircraft were assigned to the undercarriage test center and used in measuring landing shocks under various load conditions. One aircraft had the lower wings removed just outboard of the landing gear and was successfully tested as a sesquiplane. The remaining aircraft were transferred to Rumania and their ultimate disposition is not known.

This is not an easy model to build, but neither is it too difficult as construction is entirely conventional. The stringer, half shell former method is used for the fuselage. Little can be said about that except that the keel and master side stringers are made by laminating two pieces of 1/16th square balsa together. Alignment and accuracy are of para-mount importance. I do not propose to go into a lengthy dissertation as to how to glue former 2 to stringer Z etc, as this should be quite apparent from the plans. There are, however, several areas and operations which are atypical, and require some clarification and explanation. It is these particular areas which I will address.

Note that the fuselage is constructed minus the radiator, which is made of soft balsa sheet and added after the fuselage has been filled in with 1/16th sheet between the stringers on the nose section and top to a point just aft of the canopy The bottom wing is nested into the lower part of the fuselage between former 4 and 5, the front spar snugly mating against former 4. This should not be permanently done until after covering and final assembly is progressing. At this time stringers between formers 4 and 5 are added under the wing to complete the final fuselage shape after covering.

The spinner is built up from 3/16th balsa discs glued together with grain at 90 degrees to each other. When dry, turn to final shape using a Dremel tool or electric drill for a lathe. Although l built a three bladed propeller from two 9 inch plastic propellers, for best flight performance I suggest the use of a 10 inch plastic prop, which can easily be mated into the base of the spinner.

The canopy is built by placing clear acetate sheet over the formers as shown, with a balsa plug being carved from the forward wind-shield, which is vacuum formed with a small Mattel Vac-U-Form, if you are lucky enough to own one..." 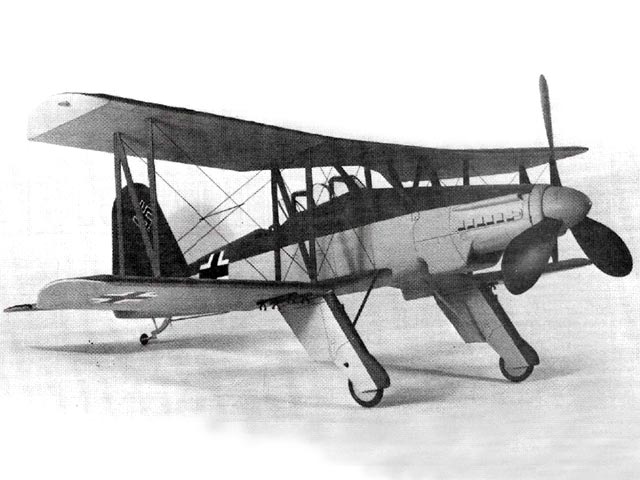